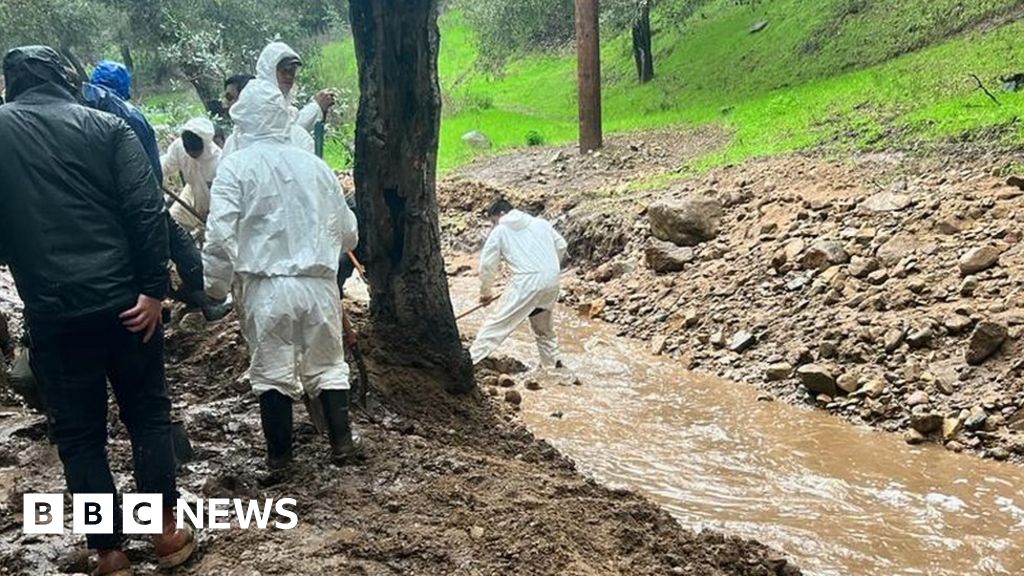 Around 25 million people in California are under a flood watch this weekend as the latest in a parade of deadly storms drenches the state.

Several waterways have flooded, at least 19 people have died and thousands have been told to evacuate their homes.

A mudslide here killed 23 people in 2018 and many are afraid it could happen again.

Rita Bourbon credits Italian stone masons with saving her life. The craftsmen built her home more than a century ago and she says it’s like a fortress.

She survived the storm five years ago, crying inside with her daughter and some friends as they listened to the sound of boulders and other houses ripped from their foundations crashing into her home.

The next day, the neighbourhood up the coast from Los Angeles was wrecked and almost two dozen were dead, including her neighbour whom she found in her garden in the mud.

“It’s a sound I used to love,” she says of the creek burbling in her garden, which is now bursting with ripe citrus and persimmon trees, as a blue heron drinks from her muddy pool.

Montecito creek became a violent, raging flow again this past week, prompting fire officials to issue a “Leave Now!” warning to the entire community, which includes some of California’s most famous residents such as Oprah Winfrey, Prince Harry and Meghan Markle.

The evacuation order in Montecito has been lifted, but residents remain on edge. And with so much of the land already saturated, the risk of flooding and landslides is very real.

Abe Powell is the co-founder of the Santa Barbara Bucket Brigade, formed in 2018 to mobilise volunteers to clean up after the deadly mudslide.

This week, Powell led volunteers around the community, filling sandbags and digging trenches. He took us on a perilous drive up a narrow mountain road where giant boulders and mud blocked access to some homes.

“We don’t want to hang around here,” he said, looking at the fresh boulders.

Film producer Steve McGlothen is one of the volunteers. He has lived in the area for half a century and in his cliff top home for 27 years.

Helping others, he said, takes his mind off the problems at his own property and the despair he feels as the rain keeps falling. Plastic sheets cover the hillside, which slid away for the first time this week – an attempt to stop this latest deluge from making the slide worse.

The Governor of California, Gavin Newsom, joined the volunteers filling sandbags in Santa Barbara. He says the area is a “hot spot” he’s concerned about in the coming days.

“We’ve experienced some 24 trillion gallons of water falling on this state in the last 16 days in the middle of a mega drought,” Governor Newsom told the BBC. He says California needs to reimagine the way it manages water, because the infrastructure here was built for a time which no longer exists.

Californians are used to extreme weather – wildfires, drought and the threat of earthquakes, with many awaiting the “Big One” that so many experts predict. But the “storm parade” pummelling California is new.

At least 19 people have died in these storms, which began in late December. A five-year-old boy is still missing after he was ripped from his mother’s arms in fast-moving flood water in central California, when they got trapped while driving to school.

In Northern California, vineyards are under water. In Capitola, the historic wharf has been destroyed and the beach town battered. In the storied Salinas Valley, the river is rising and threatening California’s famed agricultural heartland.

Nasa climate scientist Kimberley Rain Miner says the challenge with having this many huge storms, back to back, is that the ground is already saturated and can’t absorb the amount of water falling quickly.

“If we are unable to slow the warming of the atmosphere, we can expect to see more and more extreme events happening more and more frequently,” Miner told the BBC, while surveying storm damage on a beach in Ventura. “And that’s global. That’s not just in California.”

In California everyone is watching their phones, waiting to hear if they should evacuate and wondering where it might be safe to go if they do need to leave town.

For Rita Bourbon, she decided not to wait. Even though she’s confident her house will survive, she doesn’t want to relive the trauma of another landslide. She opted to visit friends in Los Angeles this weekend.

“I just don’t want to go through another mudslide,” she said, adding that she would be a “nervous wreck” if she stayed. “Just hearing the creek and the cracking together of boulders. It’s better for everyone if I just go.”