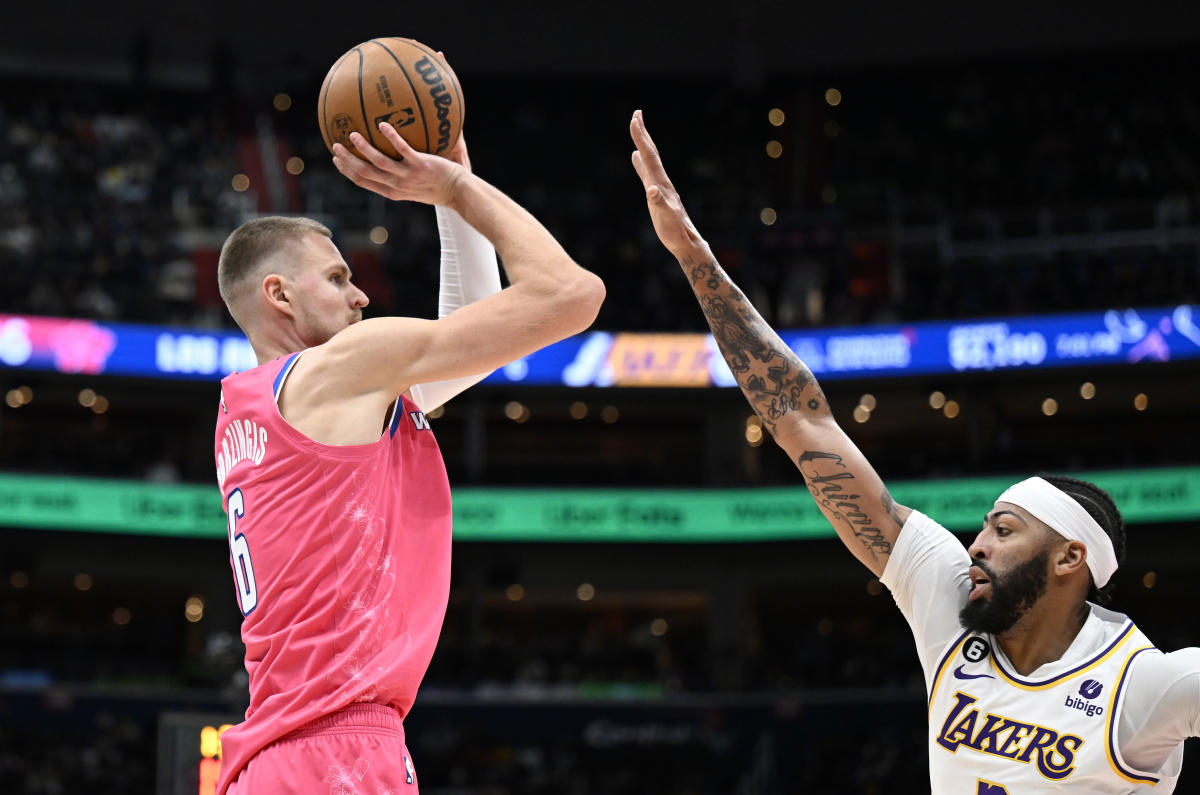 It’s not just the Wizards’ pink uniforms. There’s something different about Kristaps Porzingis in Washington this season.

The whiskers along his jawline now condense into a thick beard framing his chin. Over the summer, en route to the barbershop for a routine cut, Porzingis’ girlfriend, Laura, urged him to keep his offseason scruff. Long clean-shaven and originally defiant, “I said, ‘I don’t have enough [facial hair], no way,’” Porzingis told Yahoo Sports. But then his barber agreed with Laura, persuading the former All-Star to bear another week of growth before the man could shape a perfect style for Washington’s new second banana to Bradley Beal. “And then it started to look like something,” Porzingis grinned. “I don’t look 15 anymore, that’s the good thing. I was 25 years old and looked like a kid.”

Now 27, he’s learning how to maintain his stringy beard with wax, while adapting seamlessly to his second team since New York selected him fourth in the 2015 NBA draft. After injuries and tensions with co-star Luka Doncic derailed his Mavericks tenure, Porzingis has started and played 23 of the Wizards’ 24 games this season, averaging 21.8 points — the second-highest mark of his career, behind only the 2017-18 season in which Porzingis earned his only All-Star appearance.

He’s found quite the compatibility with Beal and Co. The Wizards’ centerpiece can scurry off the ball and relocate along the wings as Porzingis catches at the nail and works through his low-post touches. Beal is having the most efficient shooting season of his own impressive career, converting better than 50% from the field for the first time. According to Second Spectrum, Beal’s getting better looks with Porzingis on the floor for his best shot quality since 2018-19. They function as two hubs of Washington’s offense, two constellations in equal orbit, as opposed to the 7-foot-3 marksman constantly revolving around Doncic’s singular engine.

Such an egalitarian partnership, though, was how Dallas first billed its dreamy Doncic-Porzingis pairing in 2019, when the Mavericks swooped in to land the 23-year-old fresh off that All-Star appearance — despite a torn ACL in his left knee sidelining Porzingis for the entire 2018-19 campaign. The Mavericks lavished their splashy acquisition with a five-year, $158 million deal during that July’s free agency, without him even playing a game for the franchise.

Dallas backed up its vision with its checkbook and sold the prodigy, with a mystical skill set worthy of “The Unicorn” nickname, on forming a decade-long duet with Doncic.

“On paper, it would be the perfect fit, but it just didn’t mesh the way that we wanted to,” Porzingis told Yahoo Sports. “We just did not mesh together well. Sometimes it’s like that in the workplace, you know? It just didn’t work out the way you expected.”

There were glimpses, and even tantalizing stretches. For sizable periods, Doncic and Porzingis formed a lethal pick-and-roll combination. They found commonalities away from the court. When the NBA flocked to Disney’s campus to restart the 2019-20 season, their first full season playing together, Dallas’ linchpins were often spotted in the pool, splashing through games of volleyball and enjoying hard seltzers. Doncic shared an Instagram story of him and Porzingis lounging on a green lawn, soaking inside twin inflatable cold tubs, a Bud Light fixed in Doncic’s right hand.

Their growing bond was palpable to Mavericks figures and onlookers familiar with both players. A shared connection with Boban Marjanovic, the affable and larger than life NBA journeyman from Serbia, seemed to bring Dallas’ combination closer.

“Off-the-court fun, it always helps building chemistry,” Porzingis said. “I was playing really well in that moment, making a lot of shots, so it was clicking, definitely.”

Those seeding games in Orlando may have marked Porzingis’ most impressive sample in the NBA. As Doncic earned All-Bubble first-team honors, his running mate was named to the second team after averaging 30.5 points, 9.5 rebounds and 1.5 blocks per outing, while hitting 38.1% of his triples. They reached the playoffs, Porzingis’ first trip to the postseason.

Only in Dallas’ first game against the Clippers, the giant felt a searing pain in his right knee. A meniscus tear would limit Porzingis severely over the next two battles against Los Angeles and then sideline him for the remainder of the series. He had hoped platelet-rich plasma injections would heal the injury, but offseason surgery inevitably followed. Porzingis missed the first nine games of the 2020-21 campaign. He would appear in only 43 games that season, often reduced to a sideline spectator dealing with soreness following his procedure.

The Mavericks quietly sniffed around Porzingis’ trade market. Surgeries in both his knees had sapped much of his mobility, when Dallas’ defensive ideology was predicated on its center stalking the back line as a fearsome rim protector. Come the 2021 playoffs, Rick Carlisle, in what amounted to his final season coaching the Mavericks, often stranded Porzingis in the corners, watching Doncic pound the rock in high-screen action just like any other floor spacer on the Mavericks’ roster.

“Luka is a generational talent. You have to put the perfect team around him to try to get the maximum out of him, you know?” Porzingis said. “I just wasn’t the right guy.”

He’d been reduced to the priciest spot-up shooter in the league. And Porzingis still struggled under Jason Kidd. As the February 2022 trade deadline approached, Dallas began to explore its options in earnest, sources said, searching how to break Porzingis’ gargantuan salary into more useful parts to complement Doncic’s solo act.

The Raptors’ front office long harbored an affinity for Porzingis, and Toronto was one of the teams on his preferred list of trade destinations away from New York a few seasons earlier. The Raptors were auctioning a package of Goran Dragic and a first-round pick to rival executives, sources said, aiming to upgrade Toronto’s postseason push. A deal with the Mavericks would have united Doncic with his fellow countryman. Instead, the Raptors moved forward on a trade with San Antonio to bring Thaddeus Young north of the border.

There was little traction on other Porzingis deals. He had missed another stretch, five straight games, with a bone bruise in that ailing right knee. “That’s the thing about me, you know? It’s like, ‘Oh yeah, he’s talented, but he cannot stay on the court consistently,’” Porzingis said.

And so, 23 minutes before the buzzer sounded, Dallas officials redialed Washington. The Wizards and Mavericks had held discussions on other trade frameworks, but these waning moments, sources said, were when the two teams first discussed sending Porzingis to the nation’s capital. Dallas was able to net an additional ball-handler in Spencer Dinwiddie, a secondary creator for Doncic, who could also spearhead bench units if the Mavericks were to, gulp, ultimately lose Jalen Brunson in free agency. Davis Bertans could recreate some of the spacing Porzingis provided — and for half the cost.

The deal’s headliner emerged from a hyperbaric chamber not long after, hoping the increased air pressure in that glass cocoon had aided his bruised knee. He was hungry for a sandwich. But Porzingis found a missed call from Mavericks president Nico Harrison. “And it’s the trade deadline,” Porzinigs said. “So I’m like, ‘Oh s***, it’s happening.’” He was bracing for a move, but believed the trade that would end his time in Dallas was more likely to come during the summer. “It was just a feeling. I knew it wasn’t going in the direction that we all expected in Dallas,” Porzingis said. “And there needed to be some changes.”

Washington didn’t hesitate for its own chance to adjust. With Beal staring down free agency, the Wizards landed a nightly 20-and-10 threat who could regain his footing and refortify Washington’s supporting cast, with an additional second-round pick. General manager Tommy Sheppard held a particular familiarity with Porzingis. The center was teammates with a favorite of this Wizards regime, Tomas Satoransky, for a handful of seasons in Sevilla. And when Sheppard flocked to Spain to visit the Wizards’ 2012 second-round pick, he invited the string bean Latvian prospect to dinner for a closer examination of the future lottery pick.

Flash forward to this offseason, here was Sheppard flying overseas once more, this time to meet Porzingis in Newcastle upon Tyne, England, while he suited up for his national team in the FIBA World Cup qualifiers. They walked and talked each day while sipping coffees, envisioning how to bring a caffeinated version of his game to Washington and Beal’s side, Porzingis’ plagued past be damned.

“Each injury, each setback, kinda makes you mature and it humbles you in a way, too, and makes your mind stronger against those kinds of things,” Porzingis told Yahoo Sports. “Nobody is protected from anything adverse. Me being through some of those things, it has only helped me. It has not maybe helped my rhythm, but it has helped me with my mental growth, to learn how to take care of my body better, and now I’m getting in a rhythm.”

He has found exercises, like a dynamic combination of lunges, to keep his legs strong and protected, finding ways to take pressure off his knees and ankles. A fixture of Washington’s lineup, Porzingis was integral to the Wizards’ 10-7 start that firmly planted the franchise back into the postseason picture.

They have faltered in six of their last seven, but Wizards personnel are bullish on the core of this group. If Kyle Kuzma can find consistency as this team’s third weapon, if Will Barton can rediscover his spark off the bench, if a few more moves from an always active front office can iron out more wrinkles, what’s stopping this group from solidifying a new era of playoff relevance?

Porzingis feels the same confidence. While he faces a player option ahead of the 2023-24 campaign, he sounds optimistic about finding a new contract to solidify this new home.