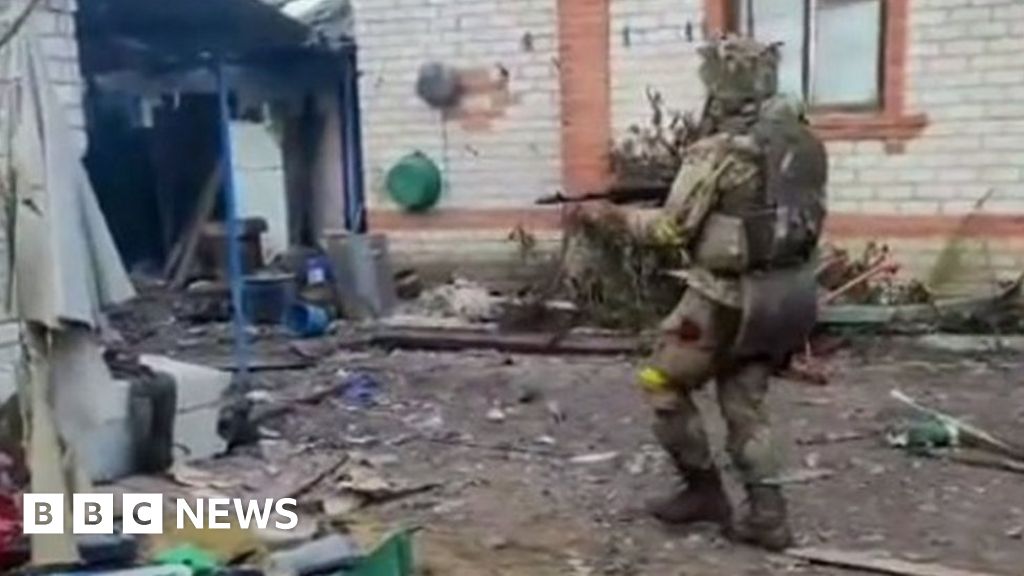 A video has emerged from the front line in eastern Ukraine showing the surrender of a group of soldiers in an incident that appears to end in their deaths.

Russia has reacted to the footage, accusing Ukraine of executing Russian prisoners of war, which would be a war crime. Ukraine has not yet responded to the allegations.

The BBC has not been able to establish Russia’s assertions from the video alone, but we’ve been studying the footage, trying to piece together what might have happened.

Warning: This piece contains graphic images which some may find upsetting.

The incident happened on or before Saturday 12 November in Makiyivka, a village on the front line in Luhansk region.

Drone footage appeared later that day and on Sunday on pro-Ukrainian sites showing the bodies of a number of uniformed soldiers lying on the ground in a farmyard.

Part of the footage from this scene also appears in a video posted online by the Ukrainian Ministry of Defence about military operations in the Makiyivka area.

Some social media posts suggest a mortar strike was responsible.

But that version of events has been challenged by pro-Russian outlets who claim the soldiers were shot by personnel from Ukraine’s 80th airborne assault brigade.

Then on 17 November more video footage emerged, this time filmed from ground level by someone present at scene, and shouting can be heard in Ukrainian for anyone hiding inside a shed to come out.

They emerge one by one and lie down on the ground.

Voices can be heard asking if everyone is out.

The captors speak Ukrainian in the video, while the uniforms of the captives look Russian not Ukrainian. The Russian defence ministry and media has also said the prisoners are Russian.

This video then shows a man dressed in dark clothing emerging. He appears to be armed and to open fire as he steps forward.

We are unable to tell from the video whether the man is Russian or Ukrainian and exactly what he’s firing at.

The camera then falls away as gunfire rings out. The video ends in blurred confusion.

The aerial footage (from the drone) and the video filmed on the ground appear to match the same scene.

Russia’s defence ministry has denounced what happened as a “deliberate and methodical murder” by shots to the head of more than 10 immobilised Russian servicemen. It goes on to say that it is “not the first and not the only war crime” by Ukrainian forces.

Killing or wounding a combatant who has laid down their arms and surrendered is a war crime.

Russia has been accused of multiple war crimes, including the killing of civilians in Bucha – which we have also investigated.

Surrender and exchanges of prisoners of war have become a significant factor in this war that has lasted almost nine months.

In a report this week, a UN mission in Ukraine reported abuses of prisoners by both sides. The vast majority of released Ukrainian prisoners they spoke to said they were tortured and ill-treated and nine people died.

Unlike Russia, Ukraine allowed access to detained prisoners. Some told the mission of summary executions and several cases of torture and ill-treatment.

Last weekend a gruesome video emerged that appeared to show the death of a mercenary at the hands of his own Russian Wagner group.

Unverified footage showed Yevgeny Nuzhin, 55, being hit on the head with a sledgehammer. Wagner boss Yevgeny Prigozhin later accused him of betraying Russia and his comrades.

Nuzhin, a convicted killer, had appeared in a Ukrainian video after he was captured, announcing he had changed sides. Just how he ended up in Russian hands is not clear but Ukrainian officials said he had not surrendered voluntarily so was not considered somebody who could be exchanged.

An exchange of prisoners of war took place on 11 November but Nuzhin was not one of them. He appears to have been attacked in Kyiv before being captured by the men who killed him.