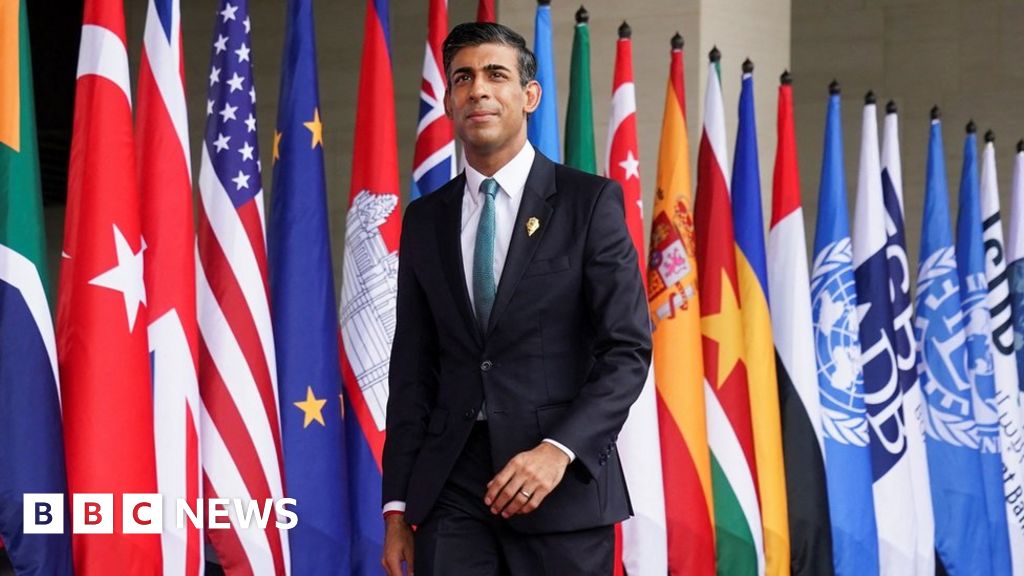 Rishi Sunak will call for a “frank and constructive relationship” with China during a meeting with the country’s President Xi Jinping at the G20 summit.

It is the first time a UK prime minister has met the Chinese president in person since 2018.

No 10 said China had “fundamentally different values to ours”.

But it said issues like the Ukraine war could not be addressed without “co-ordinated action by the world’s major economies”, including China.

Leaders of the world’s biggest economies are meeting in Bali, Indonesia, to discuss global challenges including the economic recovery from the Covid pandemic and the impact of the Russian invasion of Ukraine.

On Monday, US President Joe Biden also met President Xi and promised there would be no “new Cold War” with China.

The prime minister’s official spokesman said the UK government was “clear-eyed” in how it approached its relationship with China.

“The challenges posed by China are systemic, they’re long term, and it’s a country… with fundamentally different values to ours,” he said.

“But equally, none of the issues that we are discussing at the G20 – be it the global economy, Ukraine, climate change, global health – none of them can be addressed without co-ordinated action by the world’s major economies and of course that includes China.”

Downing Street said the prime minister would “encourage China to use its place on the global stage responsibly to resolve geopolitical tensions, ensure regional stability and play its part in tackling the devastating global impact of the war in Ukraine”.

It added that Mr Sunak would stress the UK’s national and economic security was a “pre-condition for any UK-China engagement”.

“And he will underline the importance the UK places on defending human rights and of speaking out and taking action where we have concerns – as we have done over Hong Kong and Xinjiang,” No 10 said.

Some Conservative MPs have called on the government to take a tougher stance on China.

Last year five MPs and two peers were sanctioned by China after raising concerns about human rights abuses against the Uyghur Muslim minority group in Xinjiang.

Mr Sunak’s predecessor Liz Truss was reportedly planning to re-categorise China as a “threat” to the UK as part of a foreign policy review.

On Tuesday, asked whether he would do the same, Mr Sunak told reporters: “I think that China unequivocally poses a systemic threat – well, a systemic challenge – to our values and our interests and is undoubtedly the biggest state-based threat to our economic security.”

But he added that it would not be possible to resolve global challenges like climate change or the war in Ukraine “without having a dialogue with them”.

In response, former Conservative leader Sir Iain Duncan Smith, one of those sanctioned by China, suggested Mr Sunak was softening on his previous position.

He told Talk TV: “It’s time to call [China] out as what they are, a threat, but I hope [the prime minister’s] not about to do a U-turn, it would be completely wrong.”

On Tuesday, Mr Sunak will also meet the leaders of India, Australia and Indonesia, as well as President Biden.

In a meeting with Prime Minister Narendra Modi, he will confirm a new partnership with India, opening in early 2023, to give young professionals the chance to work in the other country.

Under the new scheme, the UK will offer 3,000 places annually to degree-educated Indian nationals aged 18-30 to live and work in the UK for up to two years.

The scheme would be reciprocal, with the opportunity for British nationals to also work in India.

Mr Sunak said the Indo-Pacific region was “increasingly crucial for our security and our prosperity”.

The prime minister, whose parents are of Indian origin and whose wife was born in the country, said: “I know first-hand the incredible value of the deep cultural and historic ties we have with India.”

The UK is currently negotiating a trade deal with India.

A deal had been expected to be completed by the end of October to coincide with Diwali.