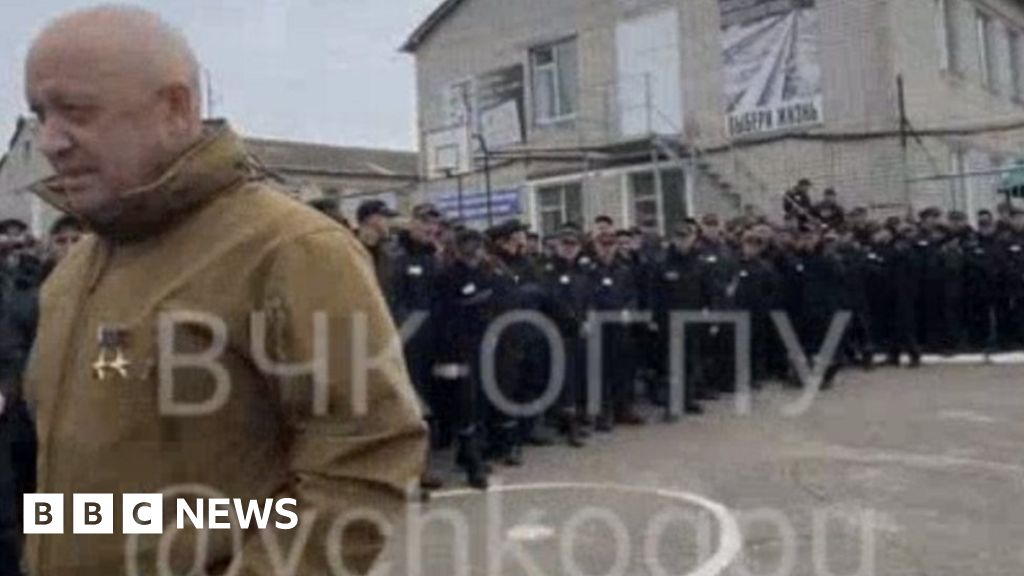 The founder of Russia’s shadowy Wagner mercenary group has appeared in leaked footage attempting to recruit prisoners to fight in Ukraine.

In filmed footage, verified by the BBC, Yevgeniy Prigozhin can be seen addressing a large group of detainees.

Mr Prigozhin told prisoners their sentences would be commuted in exchange for service with his group.

The video would confirm long-running speculation that Russia hopes to boost its forces by recruiting convicts.

While Russian law does not allow commutation of prison sentences in exchange for mercenary service, Mr Prigozhin insisted that “nobody goes back behind bars” if they serve with his group.

“If you serve six months (in Wagner), you are free,” he said. But he warned potential recruits against desertion and said “if you arrive in Ukraine and decide it’s not for you, we will execute you”.

Speaking in what appeared to be the penal colony’s exercise yard, the mercenary chief also alluded to the difficulties Russia has faced in the protracted conflict, telling potential recruits that “this is a hard war, not even close to the likes of Chechnya and the others”.

It is unclear who filmed the video, when it occurred or how it was released.

But the BBC has geolocated the footage to a penal colony in Russia’s central Mariy El Republic. Analysts did this by conducting a reverse image search a church visible in the background of the video, which matched to penal colony number six.

A screengrab on the recruiter’s face was also run through facial recognition software tools, returning a positive match of between 71% and 75% with an actual photo of Mr Prigozhin.

Separately, sources confirmed to the BBC’s Russian service that the person in the video was likely Mr Prigozhin.

“This is his voice. His intonation. His words and manner of speaking… I’m 95 percent sure that this is him and this is not a montage,” one source told the BBC.

“Very similar, his manner, and his voice is very similar,” another said.

The 61-year-old’s own company, Concord, refused to deny that he appeared in the footage, noting the “monstrous” similarity when approached by Russian state media.

Mr Prigozhin – who is a close ally of Russian President Vladimir Putin – has previously denied links to the Wagner group, whose forces have been deployed in Ukraine, Syria and several African conflicts.

But in the video, the oligarch can be seen telling inmates that he is a “representative of a private war company”.

“Perhaps you heard the name – Wagner Group,” he asks the group of prisoners.

He said recruits must be in “good physical shape”, before revealing that the first 40 recruits from a penal colony in St Petersburg were deployed during an attack on Vuhlehirska Power Station in eastern Ukraine last June.

He said the prisoners had stormed the Ukrainian trenches and attacked Kyiv’s troops with knives. Three of the men – including a 52-year-old who spent more than 30 years in detention – were killed, Mr Prigozhin said.

Later in the video, he warned the convicts, who are all sporting black jump suits, that they will be expected to kill themselves with hand grenades if they are at risk of being captured.

The Wagner group’s origins are shadowy, but it is believed to have been formed by an ex-Russian army officer, Dmitri Utkin.

The BBC has previously identified links between the group and Mr Prigozhin, known as “Putin’s chef” – so-called because he rose from being a restaurateur and caterer for the Kremlin.

The collective is believed to have been deployed to Ukraine since 2014, and since Russia’s invasion in February Ukrainian forces have carried out strikes on what they say were Wagner bases in occupied eastern Ukraine.

In August, US defence officials said up to 80,000 Russian troops have been killed or injured since the war began in February, and Moscow has reportedly turned to Wagner to fill the gap left by the heavy casualties.

Last month, independent Russian media spoke to inmates held in facilities in different locations in Russia who told them that Mr Prigozhin had personally visited their facility to recruit inmates to join the fight in Ukraine.