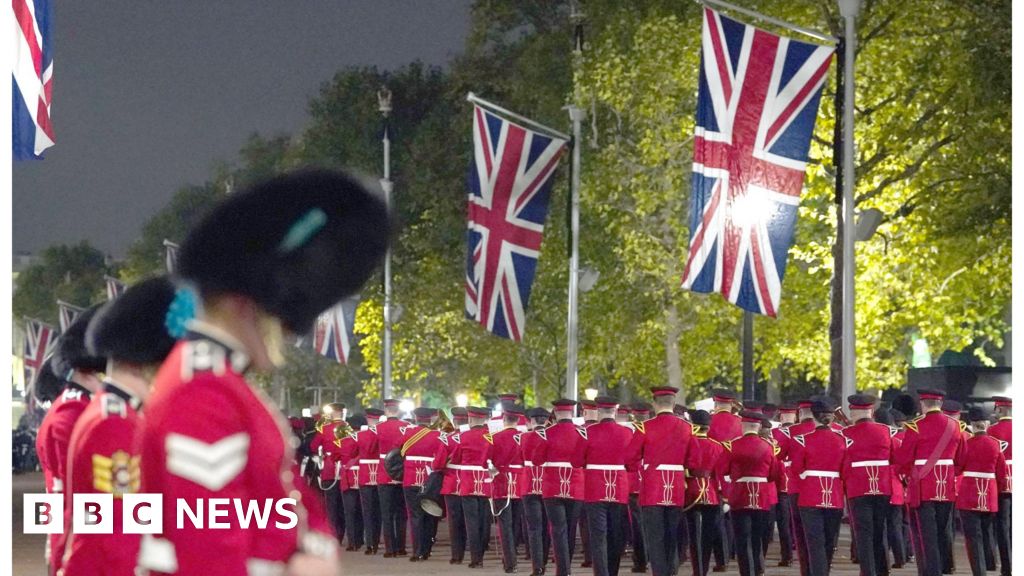 Queen Elizabeth II made personal additions to plans for her funeral day, Buckingham Palace has said.

Among the touches requested by the Queen is the playing of a lament by her piper.

The state funeral at Westminster Abbey on Monday is likely to be one of the biggest single ceremonial events staged in Britain since World War Two.

A national two-minute silence will be held as the service draws to a close just before midday.

The order of service, with its choice of music and readings, is expected to reflect more of the Queen’s personal choices for the funeral.

Palace aides said the Queen had been consulted on all the arrangements.

Among those who have confirmed their attendance at the state funeral, which starts at 11:00 BST, are US President Joe Biden and French President Emmanuel Macron.

Alongside royalty, politicians and world leaders will be 200 people who were recognised in the Queen’s Birthday Honours, including those who helped with the response to the coronavirus pandemic.

A former police officer awarded the George Cross after being shot at 15 times is also among those due to attend the state funeral.

The official organiser of Monday’s events, the Earl Marshal, the Duke of Norfolk, said his role was “both humbling and daunting”.

He said the solemnity of the last few days of mourning and the constitutional process was the “envy of the world”.

The duke, who took on the hereditary position in 2002, said Monday’s service would aim to “unite people across the globe and resonate with people of all faiths”.

Events on Monday will begin with the funeral procession, which will see the Queen’s coffin conveyed from Westminster Hall, where she is lying in state, to the nearby Abbey.

Prince Harry the Duke of Sussex and his brother William, the new Prince of Wales, will once more walk side-by-side behind the Queen’s coffin during the procession.

The Queen’s coffin will be carried on the gun carriage that was used for the funerals of Edward VII, George V, George VI and Sir Winston Churchill. It will be pulled by 142 Royal Navy sailors.

Towards the end of the service, the Last Post will be played, followed by a national two-minute silence. The conclusion of the state funeral, expected at 12:00, will be marked by a lament played by the Queen’s piper.

After the Abbey service, the Queen’s coffin will be carried in a further procession to Wellington Arch – led by the Royal Canadian Mounted Police and members of NHS staff.

It will then be conveyed to Windsor by road, before a committal service takes place at 16:00 at St George’s Chapel, led by the Dean of Windsor and with a congregation including the Royal Family and some of the Queen’s personal staff.

As the Queen’s coffin is lowered into the royal vault, the Archbishop of Canterbury will read a blessing and the Queen’s piper will play a lament.

The Crown Jeweller will be in attendance to collect the crown from the Queen’s coffin and convey it back to the Tower of London.

A final private burial service for close family members will be held at 19:30.

The Queen will be buried in the King George VI Memorial Chapel, where she will rest with her husband Prince Philip, the Duke of Edinburgh, who died last year.

The skies over London will be quiet during the two-minute silence, as Heathrow airport stops all departures and arrivals for 30 minutes from 11:40.

Separate changes to operations at the airport will ensure silence overhead during the ceremonies in Windsor.

The BBC will broadcast a special programme for Monday’s funeral from 08:00 to 17:00 on BBC One and iPlayer.

Queen’s funeral plans: What we know so far

The dazzling crown resting on top of the Queen’s coffin

How will you be watching the funeral? Do you have any specific plans? Email: yourqueen@bbc.co.uk.

If you are reading this page and can’t see the form you will need to visit the mobile version of the BBC website to submit your question or comment or you can email us at yourqueen@bbc.co.uk. Please include your name, age and location with any submission.