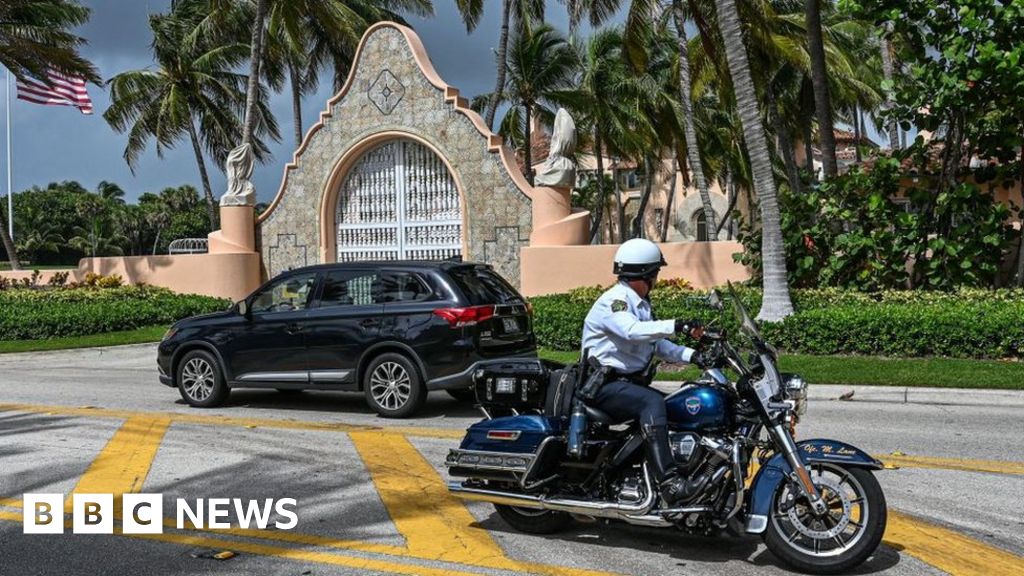 The document, made public by a Florida court, provides an inventory of the contents of 33 boxes recovered from the former president’s Mar-a-Lago estate.

It also shows top secret files were recovered from his personal office.

Mr Trump, who is being investigated over his handling of classified records, denies wrongdoing.

Previous court filings have confirmed the ex-president held classified records in storage areas at Mar-a-Lago, but the document unsealed on Friday showed dozens of files were found in Mr Trump’s office.

Among the items recovered from that room during the unprecedented 8 August search were:

US presidents must transfer all of their documents and emails to the National Archives. The justice department is looking into whether Mr Trump improperly handled records by taking them from the White House to his Mar-a-Lago estate after he left office in January 2021.

Prosecutors allege Mr Trump and his lawyers failed to provide relevant documents voluntarily, and “likely concealed or removed” records as part of an effort to obstruct the investigation.

Mr Trump has rebuked these claims, arguing he had already declassified the documents that were in his possession. He has also argued that the files were kept securely in a storage room at Mar-a-Lago.

But the inventory unsealed on Friday showed FBI agents retrieved about 1,500 documents from his office as well as folders labelled with classified banners that were empty.

The court filing also confirms previous reports that many records were mixed with personal effects, including clothes, books and newspapers.

Taylor Budowich, a spokesman for Mr Trump, said the unsealed document showed the government’s actions were “not some surgical, confined search and retrieval” but “a SMASH AND GRAB”.

The more detailed inventory of the classified material seized by the justice department in its Mar-a-Lago search doesn’t shed much light on what exactly was in the documents.

What it does reveal, however, is where they were located.

This suggests that these highly classified items were not just gathering dust in boxes in the bowels of Mar-a-Lago, they were at the former president’s fingertips – and that he may have had them accessible for a reason.

The government list does not go into further detail about where in the president’s office these documents were located, although in a court filing earlier this week the justice department said three classified items were found in his office’s desks.

Mr Trump has also publicly complained that the FBI accessed his safe, so that could be another possible location.

The inventory also shows that many classified documents, in the storage room and in Mr Trump’s office, were intermixed with photographs, newspaper clippings, “clothing/gift items” and empty folders – underlying the apparently haphazard method of boxing and removing material in the final days the Trump presidency.

Separately, District Court Judge Aileen Cannon – who ordered the inventory to be unsealed – is expected to soon rule on a request by Mr Trump’s legal team for an independent expert to review the seized documents.

Lawyers for the former president argue that the outside legal expert, known as a special master, is needed to determine whether the files are covered by executive privilege, which allows presidents to keep certain communications under wraps, or by attorney-client privilege.

In a filing on Wednesday, they claimed that, without neutral oversight, the justice department would “impugn, leak, and publicise selective aspects” of its investigation.

The department earlier opposed the move as unnecessary, claiming its review of the retrieved records was already complete. It also said the appointment could delay its investigation as the special master would likely need to obtain security clearance as well as authorisation from the intelligence agencies to view the materials.

At a hearing on Thursday, Judge Cannon indicated that she may grant Mr Trump’s request.