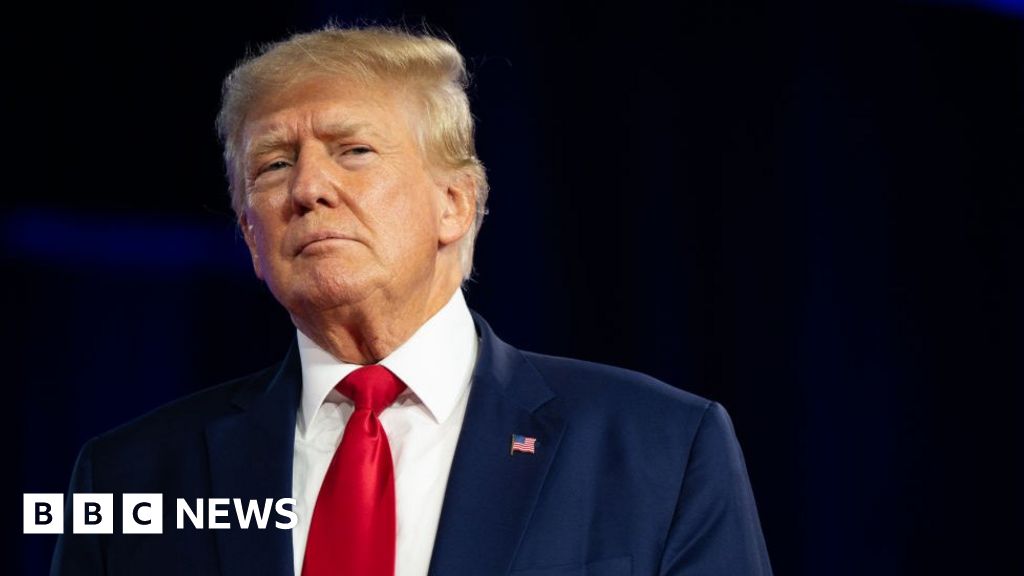 The FBI told a judge they expected to find “evidence of obstruction” of justice in a search of former President Donald Trump’s Florida home, according to newly released court papers.

Investigators said top secret files had been stored at Mar-a-Lago along with assorted newspapers and magazines.

The justice department said it censored the affidavit to protect “a significant number of civilian witnesses”.

Mr Trump said the inquiry was being led by “political Hacks and Thugs”.

On Friday, the US Department of Justice released a version of the affidavit used to justify the FBI’s incursion into Mr Trump’s Mar-a-Lago estate on 8 August, but it has been heavily redacted.

Given that the court papers were filed before the search of the Palm Beach estate, they contain no new details on the 11 sets of classified documents that the justice department has said were recovered from the exclusive golf club.

The FBI agent who drafted the affidavit wrote they had “probable cause” to believe that “evidence, contraband, fruits of crimes or other items illegally possessed” would be discovered.

“There is also probable cause to believe that evidence of obstruction will be found at the premises,” the agent added.

The document shows that the unprecedented criminal investigation into a former president began after the National Archives, which maintains historic White House records, identified “a lot” of classified files among 15 boxes that it had recovered from Mar-a-Lago in January this year.

An FBI review of those materials uncovered 184 classified documents, including 25 marked as “Top Secret”.

A serious investigation not just about mementoes

The curtain of secrecy has been pulled back ever so slightly on the justice department’s investigation into the handling of classified documents and presidential records at Mar-a-Lago.

Even with all the redactions, the picture revealed should be concerning to Donald Trump and his associates.

This is a serious criminal investigation.

It’s not just about who gets to keep some presidential mementoes and souvenirs – it concerns the security of closely guarded US government secrets – ones involving human intelligence gathering, foreign surveillance and perhaps even court-authorised surveillance of US citizens.

Mr Trump has had an assortment of legal headaches since his chaotic departure from the White House in January 2021.

After the Mar-a-Lago search, and these subsequent revelations, this investigation may have moved up to the top of the list.

The cache included information from highly sensitive US intelligence human sources. Some items were also marked “Noforn” – meaning they must not be released to foreign nationals.

The files – some of which appeared to show Mr Trump’s handwritten notes – were interspersed with newspapers, magazines, notes and other documents, according to the affidavit.

“Of most significant concern was that highly classified records were unfoldered, intermixed with other records and otherwise unproperly identified,” the document said.

The discovery led investigators to believe that Mr Trump may have been in violation of three separate federal laws, including the Espionage Act that governs classified information.

Of the 38 pages in the unsealed affidavit, 21 are mostly or entirely blacked out. There are several pages in which not a single word is visible.

A separate document explaining the proposed redactions noted that some parts of the affidavit must remain under seal to “protect the safety and privacy of civilian witnesses, in addition to law enforcement personnel, as well as to protect the integrity of the ongoing investigation”.

Revealing the identities of witnesses, the document added, could potentially lead to them being subjected to harms including “retaliation, intimidation, or harassment and even threats to their physical safety”.

It also said that a release of an unredacted copy might “chill” potential witnesses from future co-operation.

He said that Judge Bruce Reinhart, who signed off on the search, should never have allowed the “break-in of my home”. Mr Trump also accused the judge of “animosity” towards him.

He has maintained that he had already ordered all the documents to be declassified.

The justice department’s investigation is now expected to continue behind closed doors as it continues to review the documents and – potentially – call in more witnesses.

The public may not hear from prosecutors about the investigation until a decision has been made on whether it will result in any criminal charges.

Earlier in the week, Mr Trump’s legal team asked that the investigation be frozen and that an independent third-party attorney be appointed to oversee the documents taken during the search.

Mr Trump’s team was given a deadline of 26 August to elaborate on the legal justification for such a move.