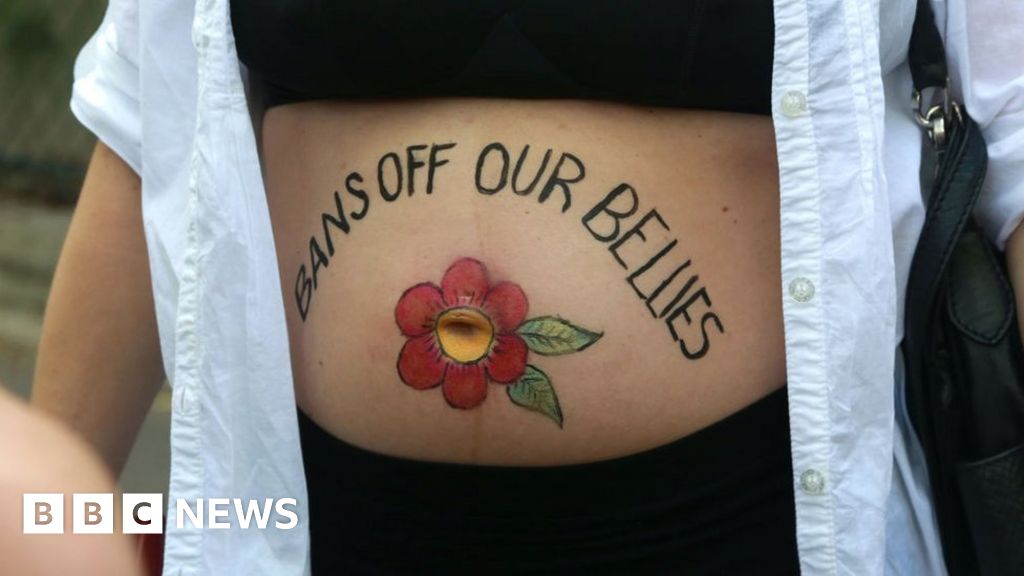 Anna*, 23, knew that she could not have another child.

She also knew that she wouldn’t get an abortion in Texas, where she lives, as the state has one of the strictest abortion laws in the United States.

So the mother of a four-month-old turned to social media to search for solutions. She found a number online, and sent a desperate text on WhatsApp: “I need an abortion”.

Across the border in Monterrey, Mexico, Sandra Cardona received the message.

Six years ago, Ms Cardona, 54, founded the Red Necesito Abortar (I Need an Abortion Network) to help Mexican women get access to abortion pills, because terminating an abortion was severely restricted in the country at the time.

She chose the name so that women who needed an abortion could find it easily online.

The group sends misoprostol, a medication that induces abortion, to women who ask for it, and helps house some of them when undergoing the procedure at their headquarters in the northern state of Nuevo Leon.

Some come to Ms Cardona to get the medicines “and we explain (the procedure) to them,” she said. “And some want to stay and we ‘accompany’ them,” – meaning to sit with them and take them through a protocol established by the World Health Organization that lays out how to use the pill when there is not a doctor present.

While in the past, they have largely helped women in Monterrey and migrants heading north, the number of Americans has steadily increased over the past year.

“A year or so ago I attended to the first woman,” Ms Cardona told BBC. “I do not speak English, but with the help of Google we understood each other.”

Anna arrived in Monterrey one afternoon in October. That night, she had her abortion and left the next morning.

She has not been the only one, Ms Cardona said. “The demand from Texas has grown a lot” – a reflection of the divergent paths Mexico and its northern neighbour have taken on abortion.

In September 2021, a historic ruling was handed down in Mexico, when the country’s Supreme Court of Justice unanimously struck down a law punishing abortion in the northern state of Coahuila, effectively decriminalising it across the country.

That same month, the US state of Texas just across the border put into effect what was one of the most restrictive abortion bills in the US at the time. Texas Senate Bill 8 (SB8) prohibited abortions after the sixth week of conception, a point at which many women still do not know that they are pregnant.

The law permits citizens – whether they be in the state or not – to file a lawsuit against anyone who helps a woman get an abortion past that date.

And with the US Supreme Court’s 2022 decision to overturn Roe v Wade – which had guaranteed women’s right to abortion nationwide for almost 50 years – abortion access is becoming even more restricted.

On 25 August, a law further limiting abortions triggered by the overthrow of Roe goes into effect in Texas.

But even before the Roe decision, the number of registered abortions in Texas was falling. According to government figures, there were about half as many abortions in Texas during the six months ending in February 2022, compared to the same time period the previous year.

“If you want to know how post-Roe America will look like, (Texas) is a good testing ground for it,” Jackie Dilworth, an activist for Whole Women’s Health, one of the state’s largest abortion providers, told BBC.

Fewer abortions registered in Texas does not necessarily mean that fewer abortions are being carried out. Many are being done in states with less restrictive abortion laws, or across the southern US border, in Mexico.

Ms Cardona said she has received so many messages from women in the US, she is turning her second-floor study into a place for them to stay.

“Earlier, we were letting them borrow our bedroom but we saw the need to open up more space,” she said. “It will be called the ‘aborteria’ (the abortion house)”.

And Red Necesito Abortar are not the only ones preparing to expand their work. There is an entire network of groups and activists along the US-Mexico border who also offer services, said Mariela Castro, who works for Marea Verde (Green Tide) Chihuahua, another Mexican organisation that helps women access abortions.

According to Ms Castro, women also go to Mexico because the states they live in do not have enough reproductive health services or financing.

Some women buy pills on their own at Mexican pharmacies. Others are put in contact with people who can go with them to the chemist.

The service these networks offer operates in a grey area.

In the US, abortion pills are supposed to be prescribed by healthcare providers to a patient in jurisdictions where the procedure is allowed by law.

The first works by blocking progesterone. Without that hormone, the uterine lining will thin and an embryo will not stay attached.

The second drug, misoprostol, is taken 24 to 48 hours later. Originally developed in the 1970s primarily to treat stomach ulcers, it was quickly discovered to also induce abortion and has been accepted for that use by the World Health Organization (WHO).

Within hours of ingestion, the drug causes the uterus to contract and expel the embryo. The process causes pain and bleeding, however, and in very rare cases, serious complications like sepsis and uterine damage.

The two-pill regime is approved for use up to 10 weeks of pregnancy in the US, and is now the most common method for abortion in the country.

Mexican abortion networks like Red Necesito Abortar only send misoprostol, because mifepristone is not readily available.

The WHO says misoprostol-only abortions are acceptable when mifepristone cannot be obtained, but it is not the method approved by the US Food and Drug Administration.

Moreover, sending the pills to places where medication abortion is restricted or banned “could potentially be considered a crime,” said Grace Howard, Assistant Professor of Justice Studies at San Jose State University, California.

Even before the Supreme Court Roe reversal, in the first five months of 2022, lawmakers proposed 117 restrictions across 22 states specifically on medication abortion, including outright bans.

In recent days, abortion – including medication abortion – has been prohibited in at least 10 states, and nearly a dozen more are expected to follow.

“Generally speaking, the law is going to be applied in the location where the pills are delivered to and where the person takes them,” said Prof Howard. “But they’re unlikely to extradite people from Mexico.”

The limits of their responsibilities are also unclear. Ms Castro says that Marea Verde’s role ends when “the person who requested the service is totally satisfied” and that the group trains its volunteers on first aid and emotional support, and consults doctors if complications occur.

But anti-abortion activists argue that these semi-clandestine networks put women at risk because they don’t provide medical services like health screening. They also say these medicines that are dangerous.

“Mailing drugs that can cause injury, infertility, and even death in women when there are no health and safety standards applied is reckless and deadly policy,” Kristi Hamrick, Students For Life’s spokesperson – one of the largest anti-abortion organisations in the US – told BBC.

Her group is looking into how to stop access to abortion pills from abroad, she said.

Medical experts point out that women who seek help from foreign activists to access abortion pills do so out of desperation, and reject the claim that abortion pills are medically unsafe.

“However, it is important that people taking medications at home have access to safe, non-judgmental, and supportive care within the formal medical system if they need it at any point,” said Dr Nisha Verma, a specialist in Obstetrics/Gynaecology in Atlanta and member of the American College of Obstetricians and Gynecologists.

Jane*, a 22-year-old artist from San Antonio, Texas, ended a pregnancy early with tablets from Mexico. It was her second abortion.

To help her in the process, the group that she had contacted assigned her a “caseworker”.

“She FaceTime, Skype or Zoom me and we would talk,” she told BBC. “She walked me through all my options, and when I decided to do the self-managed abortion, she called me and told everything that going to happen to me, like if I bled more than two Maxi [sanitation] pads in an hour, then that’s a dangerous amount of blood and I should go to the hospital,” she said.

“I had her phone number and I was texting her all day (the day of the abortion). (She acted) like a caseworker should do, just helping me feel safe and making sure I had everything I needed,” Jane explained.

A self-managed abortion with pills “is very painful: it causes nausea, diarrhoea, vomiting,” she said. “It’s very hard on your body”.

But Jane turned to the Mexican network for reasons of cost – the same medication from the US is much more expensive than getting misoprostol from across the border, she said.

She has helped other women seeking abortions by putting them in contact with the organisation that helped her, Jane said.

“I think there’s a lot of women who wish that they could talk but are unfortunately scared and being silenced by everything that’s going on in Texas right now,” she said.

Mexico-based pro-choice activists say they want to do more to help get abortion pills to Americans who want them.

Veronica Cruz, of Las Libres, a pioneer in the defence of medication abortion in Mexico, said Mexican abortion networks are working with US-based counterparts to distribute the pills to women on the US side of the border.

“It is a crazy thing. We always saw the United States like an example country on this matter,” said Ms Cruz, of Las Libres. “Now the world is in reverse.”

*Some names of women who received abortions have been changed to protect their privacy.