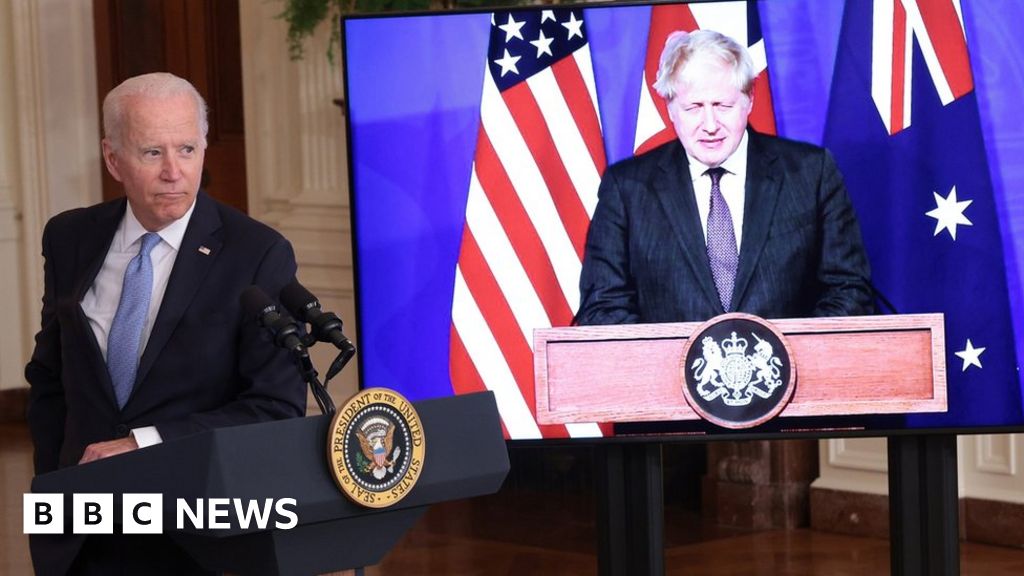 The US and UK are facing growing international criticism over a new security pact signed with Australia.

The deal – seen as an effort to counter China – will see the US and UK give Australia the technology to build nuclear-powered submarines.

But the move angered France, which said it had been “stabbed in the back”, while China accused the three powers of having a “Cold War mentality”.

And the pact has raised fears that it could provoke China into a war.

The alliance, known as Aukus, was announced by US President Joe Biden, UK Prime Minister Boris Johnson and his Australian counterpart Scott Morrison on Wednesday.

While they did not mention China, Aukus is being widely viewed as an effort to counter Beijing’s influence in the contested South China Sea.

Mr Johnson later told MPs that the agreement was “not intended to be adversarial” to China.

But the prime minister was questioned by his predecessor, Theresa May, about whether the deal could lead to Britain being dragged into war with China.

She asked the prime minister about the “implications” of the partnership in the event of a Chinese invasion of Taiwan.

Democratic Taiwan sees itself as a sovereign state, but Beijing has increased pressure on the island which it views as a breakaway province.

Meanwhile Washington has sought to quell anger in Paris at the pact, which has scuppered a multibillion-dollar submarine deal France had signed with Australia.

France’s Foreign Minister Jean-Yves Le Drian called the announcement a “stab in the back”.

He called it a “brutal, unilateral and unpredictable decision” that reminded him of former president Donald Trump.

French diplomats in Washington cancelled a gala to celebrate ties between the US and France in retaliation.

“It’s a very low moment,” France’s former ambassador to the US, Gérard Araud, told the BBC’s World Tonight programme. “The US knew that this contract and this strategic contract were essential French national interests, and the US didn’t care.”

The pact, which will also see the allies share cyber capabilities, artificial intelligence and other undersea technologies, was described as showing “profound strategic shifts” by the UK’s national security adviser Stephen Lovegrove.

It means Australia will become just the seventh nation in the world to operate nuclear-powered submarines.

Mr Lovegrove said the pact was “perhaps the most significant capability collaboration in the world anywhere in the past six decades”.

China, meanwhile, has accused the allies of having a “Cold War mentality” that would hurt their own interests.

The Chinese state-run Global Times warned of an arms race for nuclear submarines, adding that Australian soldiers were likely to be the “first to die” in a Chinese “counterattack”.

“This is not the first time that we’ve seen different outbursts from China in terms of Australia’s position,” he said.

“We are a proud democracy in our region. We stand with our neighbours in the Indo-Pacific to ensure enduring peace, and this collaboration makes it a safer region. That’s the reality and no amount of propaganda can dismiss the facts.”