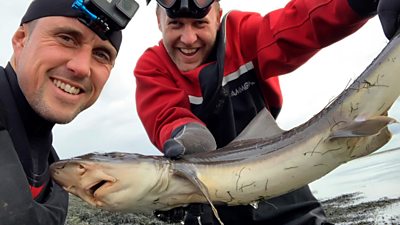 Three small sharks, dubbed “baby sharks” after the popular children’s song, had to be rescued when they became trapped in shallow water.

The smooth-hound sharks, often found in UK waters, were thought to have squeezed through a tidal flap in Burnham-on-Crouch, Essex, leading to a shallow dyke just 1ft (30cm) deep.

Ben Norrington and Andrew Ward, fisheries officers for the Environment Agency, were called to rescue the fish and release them back into the nearby river.

“It’s a fish really getting itself into somewhere that it’s not designed to be and we’re there to save them,” said Mr Norrington.

“We still don’t know how it was possible that they got in there.”