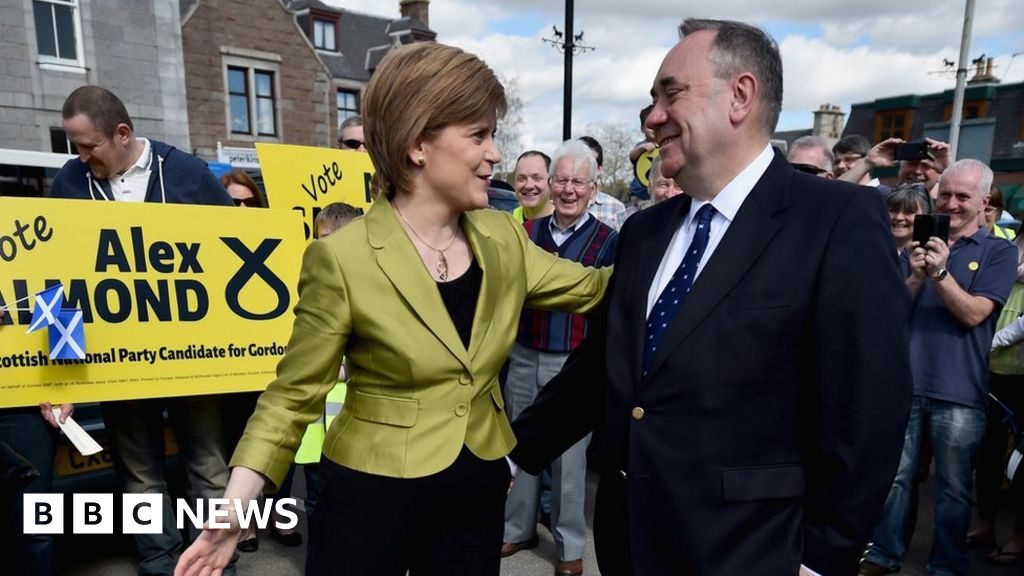 Nicola Sturgeon says Alex Salmond may be angry with her because she refused to “collude” to make sexual misconduct allegations against him “go away”.

Speaking to Sky News, the first minister also read out messages between the two after claims they had been withheld from an inquiry.

Mr Salmond was acquitted of sexual assault charges after a trial in March.

His lawyer has since suggested the Scottish government may be trying to “malign his reputation”.

The Scottish government had to pay the former first minister more than £500,000 in legal costs after accepting that its own investigation into allegations of misconduct against Mr Salmond was unlawful.

Nicola Sturgeon has previously said that she has not spoken with her former friend and mentor since July 2018 and has faced accusations that she has been less than forthcoming with the Holyrood inquiry.

In an interview with Sophy Ridge on Sunday, Ms Sturgeon said: “I think the reason perhaps he [Mr Salmond] is angry with me – and he clearly is angry with me – is that I didn’t cover it up, I didn’t collude with him to make these allegations go away and perhaps that is at the root of why he is as annoyed as he appears to be.”

Ms Sturgeon said much of the criticism she has taken over the issue was the “age-old” situation where “a man is accused of misconduct against women and often it’s a woman that ends up sitting answering for them”.

A committee of MSPs at the Scottish Parliament is looking at the government’s botched handling of complaints against Mr Salmond.

Its convener, SNP MSP Linda Fabiani, said it had been “completely frustrated” by the lack of evidence being handed over.

She said the committee was still awaiting responses from the government, Mr Salmond and SNP chief executive Peter Murrell.

Mr Salmond’s lawyers have written to the committee, claiming the Scottish government was trying to have “unlawful” documents produced by the courts – including the report from the original investigation.

Lawyer David McKie wrote that it was “extraordinary” that the government intended to produce “material that has been reduced as unlawful by court order“.

He said: “The only possible explanation for seeking to take such a step appears to our client to be a desire unjustifiably to malign his reputation, rather than account for their own unlawful actions.”

Ms Sturgeon has repeatedly rejected claims that she has withheld information from the inquiry.

She insisted that “every day I’ve tried to do the right thing and not cover it up”.

The first minister has faced accusations that she withheld some WhatsApp exchanges with Mr Salmond, but insisted they were “not a big revelation”.

She acknowledged that the messages did make “an oblique reference” to claims of inappropriate conduct by Mr Salmond – despite saying she released all relevant evidence to the Holyrood investigation.

Challenged about the claims on the programme, Ms Sturgeon offered to read out the messages.

She said she was “setting up a conversation” to discuss an inquiry by Sky News in 2017 about Mr Salmond allegedly behaving inappropriately.

Ms Sturgeon said the messages were sent during the week of 5 November 2017, and Mr Salmond had not previously told her he was to start hosting a show on Kremlin-backed broadcaster Russia Today.

Asked about the undisclosed messages, Ms Sturgeon said: “Around about the time I spoke to [Mr Salmond] about the Sky News query, I sent him a message on 5 November saying, ‘Hi, when you free to speak this morning?’. He replies saying ’10am’.

“That’s when I asked him, ‘What is this Sky thing?’

“I go back to him later that day to say, ‘Any developments?’

“So I was setting up a conversation that I have told the parliamentary inquiry about, it’s hardly a big revelation.

“Later that week, incidentally, I messaged him to say, ‘No wonder you didn’t want to tell me’. That’s just after I find out that he’s agreed to host a regular show on Russia Today, and it reflects my incredulity at that decision.

“I think his response to me then makes an oblique reference to the Sky News query, so that may be what he’s talking about.”

Pressed as to why Mr Salmond could want these messages to be released to the parliamentary inquiry, Ms Sturgeon suggested the former first minister might want people to believe the allegations were “all a big conspiracy” to deflect from his conduct.