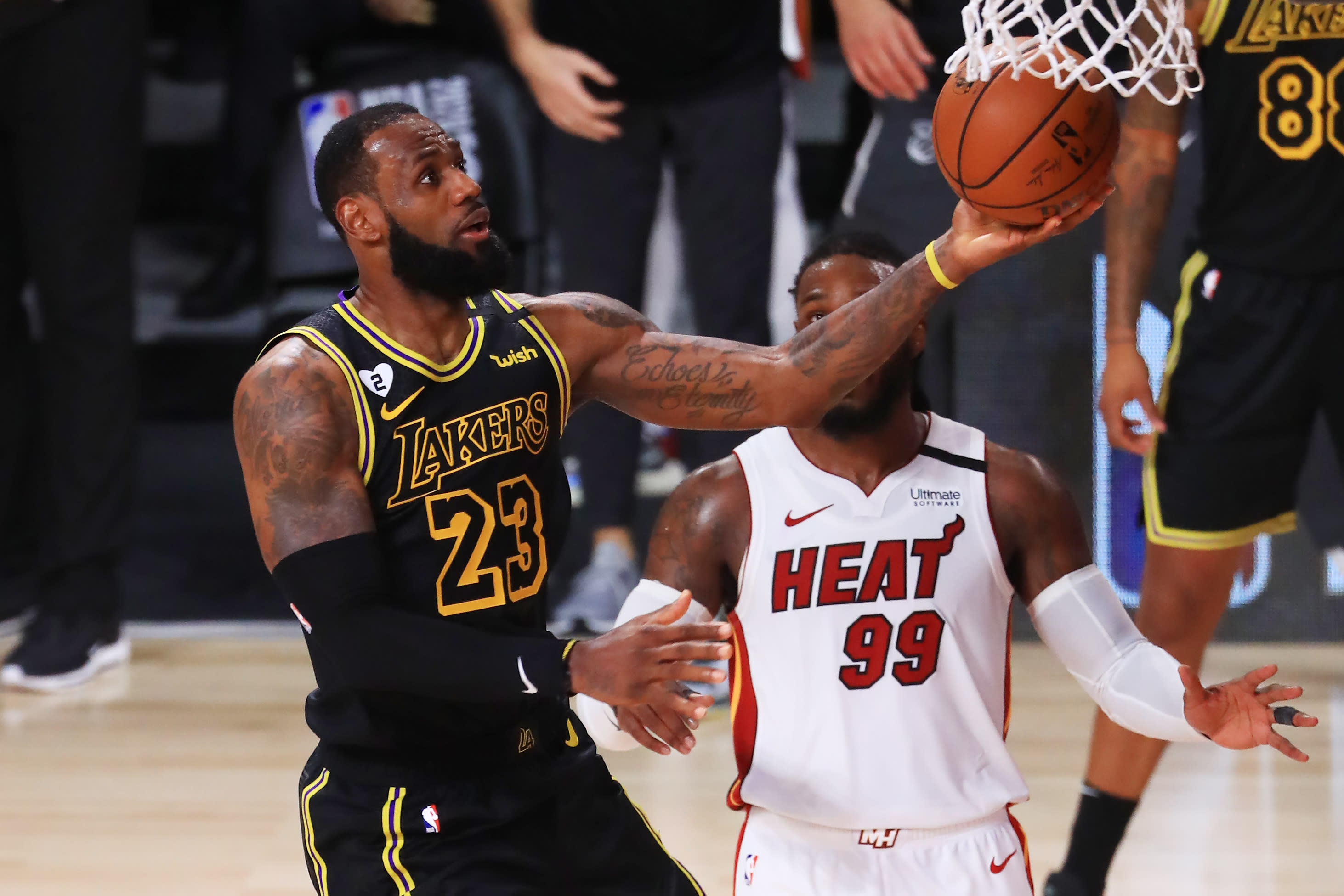 Nobody takes LeBron James’ biggest haymaker and lives to tell about it.

When LeBron decides it’s time for a series to be over, for a championship to be won, for a bubble to burst, it happens. You shake his hand, acknowledge his greatness and add yourself to the list of victims that feels like a who’s who of NBA stars past and present.

LeBron James’ best playoff performance since a 50-piece he gave to the dynastic Golden State Warriors in Game 1 of the 2018 Finals produced a similar result, even if no one expected the Miami Heat to gamely come away with a win to push these Finals to a sixth game.

In that unforgettable contest, James may have played his most focused game as a pro until J.R. Smith lost focus, losing track of the score in regulation, leading to a social media frenzy and a largely forgettable sweep.

Here, James made sure Danny Green was as wide open as possible, and at about mid-flight it felt certain Green’s shot had too much air and not enough aim, essentially sealing the Lakers’ fate and giving the Heat a little more life in a 111-108 Game 5 win.

“I mean, if you just look at the play, I was able to draw two defenders below the free-throw line and find one of our shooters at the top of the key for a wide-open three to win a championship,” James said. “I trusted him, we trusted him, and it just didn’t go. You live with that.”

James’ 40-point masterpiece was so many things: Urgent, but not rushed. Controlled, but fierce. There was no need for an asterisk had this gone the way we all expected, the way historic performances usually end.

He’s lost more than he’s won in the Finals, even as he’s performed well. But he’s never put up a performance like this, as the favorite, and it not be enough.

In some ways, it has to be a little more than demoralizing to the ego, and concern probably isn’t far behind. The Lakers didn’t take the Heat lightly, they took advantage of Miami mistakes and got out on the break, attacked the rim and relied on their best player to do what he set out to do from the moment he entered this Orlando campus. Close this thing out for a championship.

He didn’t run from the moment, he made the right play out of aggression, but it wasn’t enough.

Watching James through the years, there are very few athletes across any sport who have the sense of theater that he does. He knows where the cameras are, he knows the history, he knows the moment.

It’s not to say he puts on, but he’s as aware as anyone and as much as he tries to claim otherwise, he knows the value of history in the present.

To have a game like this, to cap off the bubble experience, with his co-star hobbled after an early injury, would give him and his legions of supporters across all mediums the fuel they needed to claim his place at the top of the mountain.

To put it more practically, when his long-range jumper is on automatic, as it was from tip-off, it was closing time. Erik Spoelstra helped fine-tune that sense of the moment from James, pushing him out of his nail-biting comfort zone and into a place where he’s so comfortable being uncomfortable the game will always move at his pace and his will.

And the longer this series goes, James knows Anthony Davis’ lower body will take more and more hits. It behooved him to finish off this opponent before something unforeseen happened — we all remember last year’s Finals.

Everything signaled for an improbable Laker victory, even with Davis’ injury. They kept stalking the Heat, like an aggressive boxer going after a wounded opponent. Miami, true to a man, would play textbook basketball for possessions at a time, working to a seven-point lead or nine-point advantage.

Three or four minutes of basketball perfection undone in about 45 seconds, a lead evaporated thanks to James’ extended right hand, a 3-point jab or flick to an open shooter to keep themselves within striking distance.

It was only a matter of time before Miami’s reservoir of resilience would expire and James would take his rightful place as new king of Los Angeles. But James found a frequent combatant being more gritty and desperate than the players he’s usually dispatched over the last decade in Jimmy Butler. For the second time in three games, Butler’s will was greater than the game’s best player, using the stage to legitimize his own place in the league, using James’ standing to have everyone look across the way at the other determined superstar.

“I mean, if you’re the best player in the world, you’re supposed to be able to do that. We keep our head high knowing that he’s going to hit some tough ones,” Butler said. “But we ain’t backing down. We ain’t shying away. We can go on the other end and do what we do. I think he had a hell of a performance tonight, along with AD.”

Butler is doing to James what James did in the 2015 Finals against the Golden State Warriors, but with a twist. Butler is guarding James, too, earning a measure of respect from those who didn’t view him in the elite category before now.

Miami is now dangerous, in part because the Heat didn’t muck up the game to get a win. While it took another otherworldly performance from Butler, they’re still without Goran Dragic and Bam Adebayo doesn’t look close to himself.

And Spoelstra almost seemed happy to take James’ best shot, almost to prove to his team that they’re worthy, that buckling is ok as long as you keep your legs—that this is probably the best game James will have and the punch didn’t feel so bad.

“Look, great players are going to make big-time plays and that’s what this level of the Finals is all about, can you continue to stay with it and find a way to get the win at the end,” he said. “We’re not expecting those guys to have ‘C’ games. You got to beat them, you have to expect to beat teams when they’re at their best. We’re not running from that.”

Someone’s running toward history, the vision is just too hazy to figure out which team, which player, is driving this thing in this moment.

Texas synagogue siege: Teens held in UK as Briton named as hostage-taker
Ukraine tension: Biden says he thinks Putin will ‘move in’
Working-from-home guidance shift ‘may not save my shop’
Do Ukrainians and Russians believe a full-scale war is possible?
In the name of God go, MP tells Boris Johnson