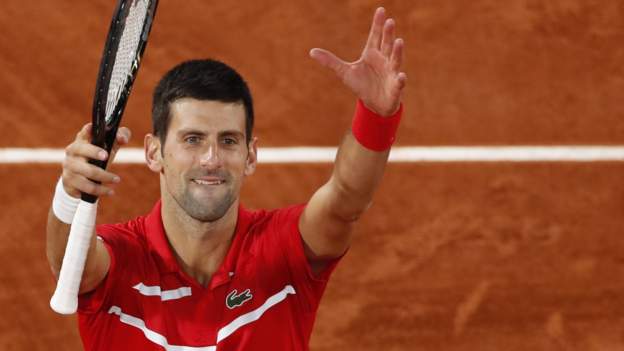 The Serb could not take a second match point in what was the final game before cracking a forehand winner to seal it.

Nadal, who is going for a 13th title, beat Argentina’s Diego Schwartzman.

The top two seeds in the men’s draw will face each other for the 56th time in their careers – no two men have played each other more – and the ninth time in a Grand Slam final.

The match could also be pivotal in the long-running battle between Djokovic, Nadal and Swiss rival Roger Federer in determining which man finishes with the most Grand Slam titles.

If Nadal lifts the Coupe des Mousquetaires trophy yet again, it will see him equal Federer’s all-time leading record of 20 men’s majors.

Djokovic, whose only triumph at Roland Garros came in 2016, knows a victory will move him to 18 – within one more of Nadal and two adrift of 39-year-old Federer.

“I’m not feeling exhausted physically so much after the match,” said Djokovic, whose victory in three hours and 54 minutes was only 45 minutes longer than Nadal’s semi-final.

“It was a great battle. But I feel fine. I think a day and a half will be plenty of time for me to recover. I’m really looking forward to a great battle with Rafa.”

Better late than never for Djokovic

When Djokovic first served for the match against Tsitsipas, nobody would have predicted the drama which followed.

It looked set to be another clinical win for the world number one by virtue of keeping his nerve in the bigger points and executing his shots perfectly.

Despite trailing by two sets to love, Tsitsipas had not played badly and the evenly matched statistics – in terms of serving, unforced errors and winners – backed that up.

The major problem for the Greek was not taking his opportunities on Djokovic’s serve. He was unable to convert any of seven break points across the first two sets.

After not being able to make three more count, he finally rectified that – crucially – by taking his 11th chance when Djokovic served for the match.

That sparked a shift in momentum. Tsitsipas broke in Djokovic’s next service game to claim the set and again at the start of the fourth.

Suddenly Djokovic became edgy – illustrated by his complaints about movement and noise in the sparse crowd – and could only take one of his 11 break points as a tense set wore on.

The Serb tightened up again and lost serve from 40-15 up in the 10th game, ensuring a gripping match went the full distance.

Tsitsipas won from two sets down for the first time in his career in a first-round match against Spain’s Jaume Munar 10 days earlier, while Djokovic had only previously lost only one of the 216 Grand Slam matches where he had won the first two sets.

With Tsitsipas looking spent after his physical exertions in fighting back, Djokovic ensured he would not fall from that position again by taking control of the decider.

Tsitsipas rallied again from saving a second match point before Djokovic whacked away a forehand winner to seal victory at the third attempt – one hour and 47 minutes after his first match point.

“I was very pleased with the way I kept my composure mentally throughout the entire match,” said Djokovic, who showed no signs of the neck and shoulder problems which bothered him in the quarter-finals.

“I did feel that even though I lost the third and fourth, I still felt like I was the better player on the court.

“Credit to him for fighting back. He just played terrific tennis, especially in the fourth set when he was facing break points.

“He’s a fighter. He’s one of the best players in the world.”

The case for making Djokovic favourite for the final

While Nadal has the unparalleled history at Roland Garros, there is justification in suggesting Djokovic has the superior form going into Sunday’s final.

Even though Djokovic has dropped three sets over the fortnight in Paris – unlike Nadal, who has not dropped any – he has regularly played at a high level which even the Spaniard would struggle to contain.

The manner of Nadal’s wins have not been quite as impressive, while Djokovic has overcome tougher opponents in Russian 15th seed Karen Khachanov, Spanish 17th seed Pablo Carreno Busta and now Tsitsipas.

In addition, Djokovic has the benefit of the extra momentum he has garnered over the past couple of months.

Djokovic has won all 37 of his completed matches in 2020, with his only loss coming when he was defaulted from that infamous US Open fourth-round match against Carreno Busta.

Nadal did not go to New York because of concerns about the coronavirus pandemic and has only played nine matches since March as a result.

Crucially, there seems to be an extra sharpness and steeliness in Djokovic’s game.

Even though he was not as clinical against Tsitsipas as it seemed he would be, the way in which he remained composed to check the Greek’s fightback and win the decider adds further weight to the thought he will win a second French Open title on Sunday.

Another worry for Nadal fans might be the way Djokovic swatted the Spaniard aside in the 2019 Australian Open final – in similar circumstances to this tournament.

Nadal had not dropped a set on his way to that final but, like now, went into the tournament without much competitive action and ended up being nowhere near the level required to cause problems for an in-form Djokovic.

Despite all of that, few would be keen to write off Nadal at the place where he has only lost twice in 15 years.