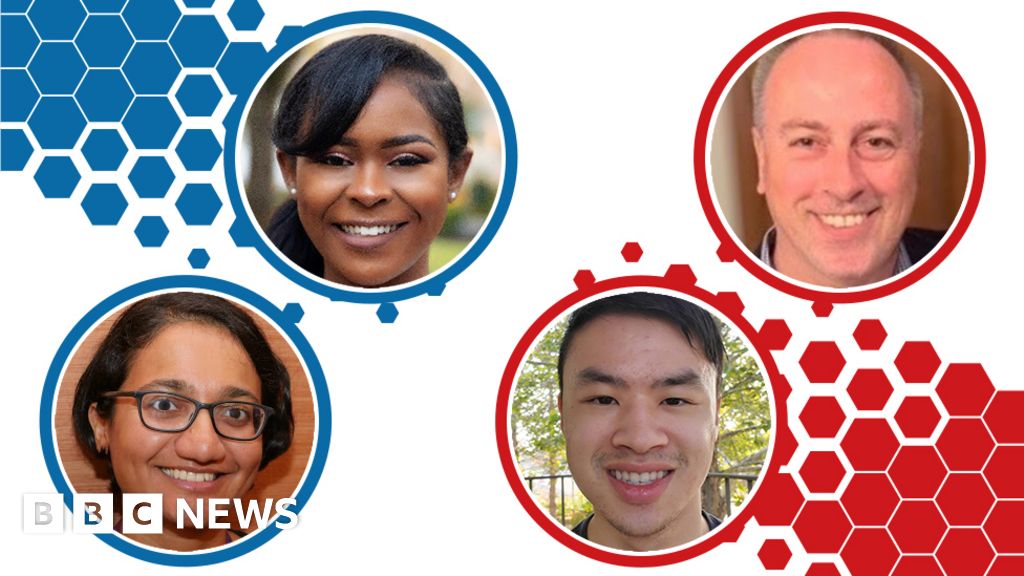 Vice-President Mike Pence and Democratic challenger Kamala Harris were under the microscope in Wednesday’s vice-presidential debate.

Many voters were frustrated by last week’s chaotic presidential debate, and were pleased with tonight’s calmer exchange between Pence and Harris.

Here’s what members of the voter panel thought about the vice-presidential debate.

Shloka Ananthanarayanan, 33, is a progressive voter from New York City who works for an international bank. She is backing Joe Biden but more enthusiastically supporting Kamala Harris as the second on the ticket.

I wouldn’t necessarily say there was one moment that stood out, but what stood out was the tone and the fact that no one was yelling at each other during this debate. The last question felt particularly impactful – it ended on such a note of civility. We can agree to disagree, but at the end of the day we are all just Americans.

The winner is based completely on where you were coming at to begin with. Ultimately I don’t think there was one person who came out as dominating the debate over the other, but they both got the chance to make their case and now it’s up to the voters to decide.

The question [on election integrity] was very interesting. [The moderator] kept pushing them and the question did not get answered. I don’t think Kamala Harris had a plan for what would happen if Trump refused to leave the White House and Pence just said we’re going to win, so it was a non-starter. That is a significant concern for a lot of people because there is a continuing rhetoric [from Trump] of ‘we won’t leave’ [the White House] or ‘even if we lose, it’s because it’s rigged’.

Jim Sullivan is a fiscal conservative who “holds his nose” to vote Trump but finds the leftward tilt of the Democrats too “radical and jolting”. He considers Mike Pence more conservative than him, but a decent man who would make a good president.

It was a lot more civil and flowed much better than the last debate. In the very beginning, Pence’s defence of the Trump administration’s efforts on coronavirus stood out to me. With regard to what Vice-President Pence said to Kamala Harris later about packing the court, I feel like that was an important question and did not feel like that was answered.

This was such an amazing leap forward and it is to the benefit of the country, re-instilling some confidence that we aren’t completely broken, can have a functioning government and can have a civil conversation hashed out in a respectful way. Both candidates did really well, but I’m going to go with Pence. He had a very good way of addressing things and the way he presents things will resonate across the country. I think it may have made some people think again if they were going in another direction.

Pence asked about packing the court and Democrats have talked about adding DC and Puerto Rico as states, and abolishing the electoral college. I would have liked to hear what Harris’ thoughts were on those things. Healthcare also is still an important issue and they did not dive into that enough. With Pence, I would have liked to hear more what the plans were for the economy going forward.

I am a Republican who is going to support the president, but there’s been times in this season I’ve felt a little undecided. Vice-President Pence gave me a certain sense of assurance about my decision, reaffirming that it’s a good choice. Given the age of the two candidates, the vice-presidential pick this time around is pretty significant. Last week was just distressing, so this was a real breath of fresh air. I don’t agree with Kamala Harris on a lot of things, but they both handled themselves well and I liked the format.

Akayla Sellers is a Democratic college student at the University of Charleston studying public health and pre-med. She is enthusiastically behind the Biden/Harris ticket and excited to see Harris bring the issues of black America to the table.

At the very end, the eighth grader posed a great question because the image typically shown in the American media is of a polarised country. At the end of the day, whether Democrat or Republican, liberal or conservative, we need a presidency that exercises compassion, empathy and love. We need leaders that respect individual human life and strive for the best in humanity.

Pence has a strategic way of saying a lot while oddly saying nothing. Harris’ direct, eloquent and stern way of answering questions provided knowledge and information, and that’s what I think is a successful debate – actually talking about policies, answering the questions wholeheartedly and [tackling] her controversial past. I feel like she won as a whole because she has a more intersectional approach that’s going to help everyone.

I didn’t see a lot of things that [young people] are passionate about. They could have discussed a lot more in depth about healthcare, education and the racial uproar. You see a lot of people crowding the streets, they are the younger generation and they didn’t discuss that in depth.

It brought back a sense of tranquillity after the circus last week made a lot of us feel that, if the Trump administration were to have another term, it would be chaotic. So it matters because I wanted to hear, in an eloquent way, what Pence’s stances were on certain issues, as well as Kamala’s, so that I can have knowledge, be aware and not be fearful, so I can spread that information on to others.

Gordon Kou is a Christian engineering graduate student at the University of Utah, where Wednesday’s debate is being held. He is still undecided in who to vote for and is considering voting third party, as he did in 2016.

The fly on Mike Pence’s head was pretty memorable, but the last question [about why the country is so polarised] was probably the brightest part of the debate. It reminded me of one of the debates in 2016, where the moderator asked Hillary Clinton and Donald Trump to compliment each other.

Both presidential candidates chose very well in their VP picks. They did a better job of defending their candidates than the actual candidates did. Overall, the winner was America because we somewhat saved face after the debacle last week.

It’s better when America hears what the actual policy stances are and we actually have something to base our votes on rather than sheer political partisanship. The debate actually makes it harder for me to decide who to vote for. I am a conservative person turned off by Trump and his conduct, but Vice-President Pence made a very good argument for a Trump presidency because he does speak to a lot of things conservatives care about.

What questions do you have for our voters?

Voters across the country will go to the polls in four weeks. What questions do you have for our voter panel? What questions can BBC journalists help answer about the US election?

In some cases, your question will be published, displaying your name, age and location as you provide it, unless you state otherwise. Your contact details will never be published. Please ensure you have read our terms & conditions and privacy policy.

Taliban break up rare protest by Afghan women in Kabul
‘Starbucks fired me for being three minutes late’
Keir Starmer calls for extra tax on oil and gas producers
Thousands more NHS beds to be created in England this winter
Afghan contractors: ‘I wish I’d never worked for the UK government’