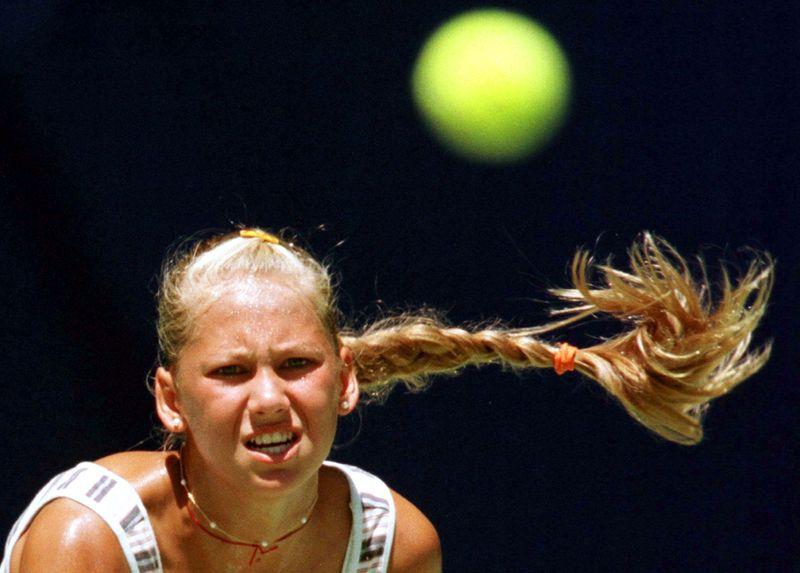 (Reuters) – For a tennis player who failed to win even one singles title on the WTA Tour, the frenzy surrounding Anna Kournikova’s relatively short career is still unparalleled.

The blonde Russian was listed among People Magazine’s 50 most beautiful people in 1998, voted the hottest female athlete on ESPN and her pictures adorned the covers of publications from Forbes to Sports Illustrated.

Kournikova’s popularity could be gauged by the fact that a fast-spreading virus, disguised as a digital photo of the tennis star, infected millions of computers in 2001 and slowed electronic mail systems and caused some servers to be shut down.

She earned millions from endorsements and modelling and her celebrity status grew due to her romance with pop star Enrique Iglesias, with whom she has three children.

Having also played a minor role in the 2000 film ‘Me, Myself & Irene’, Kournikova joined the U.S. television weight loss contest ‘The Biggest Loser’ as a trainer in 2011.

While her detractors would never consider the Russian as a serious singles player due to lack of titles, Kournikova was widely acclaimed as a child prodigy.

She picked up a racket and started playing at the age of five in Moscow at a children’s sports programme before leaving Russia to train at Nick Bollettieri’s tennis academy in Florida.

She made her debut on the WTA Tour in 1995 as a 14-year-old and the following year she went through the qualifiers to reach the fourth round of the U.S. Open in her Grand Slam debut.

She fell to top-ranked Steffi Graf but did enough at the hardcourt major which earned her the WTA Newcomer of the Year award in 1996.

The following year, the Russian made the semi-finals at Wimbledon, which ended up being her best Grand Slam showing in singles.

Despite a barren trophy cabinet, Kournikova reached a career-high singles ranking of eight in 2000. Recurring injuries, however, forced her to retire early and she did not play on the WTA Tour after 2003.

While she failed to make her mark in singles, Kournikova won 16 doubles titles, including two Australian Open crowns with Martina Hingis, and reached the top ranking in doubles in 1999.

The Swiss, who reigned as world No.1 in both singles and doubles, is among many who consider Kournikova as a trailblazer in Russian tennis.

“She was a great player, a team player, and we had great times for those two years,” said Hingis. “She kind of was the one who started this Russian Armada – or Russian generation – along with Elena Likhovtseva.

“She was definitely the one who you could aim for and be like, go around the world and live the ‘Russian-American dream.’ I loved playing with her.”

Former French Open and U.S. Open champion Svetlana Kuznetsova said Kournikova would top her list if she penned a book on the history of Russian women’s tennis.

“For me, she brought really big popularity to Russian tennis, women’s tennis. Everyone after her was just after her. For me, she was a big huge push,” Kuznetsova told the WTA Insider in 2017.

“I always defend her when they say ‘Oh, she never won a tournament’. So what? She was a Top 10 player. It’s not just about winning tournaments. I think she was great.”