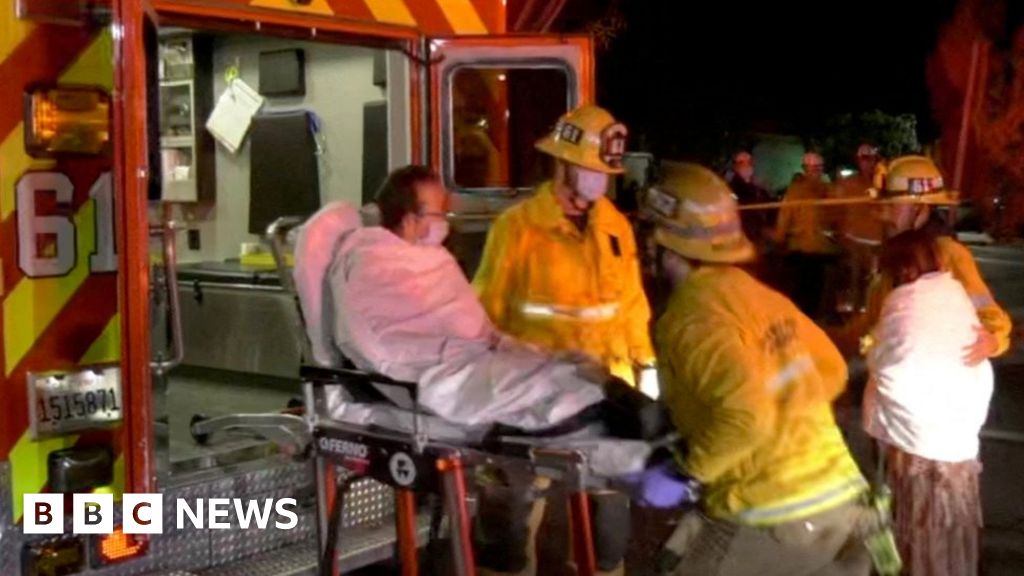 Local residents are expressing their shock after a mass shooting in Monterey Park, California, that left at least 10 people dead and at least 10 others wounded.

The incident on Saturday night happened as thousands were gathered downtown in the majority Asian-American city to mark the Lunar New Year state holiday.

The gunman is said to have entered Star Ballroom Dance Studio, a popular dance hall, and fired multiple rounds at patrons before fleeing the scene.

Wong Wei told the Los Angeles Times that his friend was at the club but had been in the bathroom when the shooting began.

He said that when she came out, she saw the gunman firing indiscriminately from a long gun, and she also saw three people lying dead, including a boss of the club. She escaped to Mr Wei’s nearby home, he said.

The gunman remains on the loose after the attack, which took place on Garvey Avenue, home to several Asian-owned businesses.

Seung Won Choi, the owner of a seafood barbecue restaurant across the street from the club, told the newspaper that three pedestrians had run inside and asked him to lock the door.

They said they had seen a man with a semi-automatic gun and multiple rounds of ammunition, he said.

A nearby resident by the name of John claimed he was home when he heard several gunshots ring out, followed by the sound of police cruisers arriving.

He said he saw at least two people with injuries at the scene.

Los Angeles County supervisor Hilda Solis told CBS Los Angeles that she was at Lunar New Year celebrations in Monterey Park but left before the shooting.

“It was a beautiful, festive occasion because, [for] two and a half years of the pandemic, they had to postpone [it]. You could see the smiles and everyone just so happy… that they could come out and celebrate,” she said.

“We pray for those that are still recovering. It’s tragic.”

Monterey Park is home to about 60,000 people, of which roughly two-thirds are of Asian descent.

Representative Judy Chu, who chairs the Congressional Asian Pacific American Caucus and is a former mayor of the city, tweeted: “My heart is broken for the victims, their families, and the people of my hometown Monterey Park.”

The state’s governor Gavin Newsom wrote: “Monterey Park should have had a night of joyful celebration of the Lunar New Year. Instead, they were the victims of a horrific and heartless act of gun violence.”

Why would China use a spy balloon when it has satellites?
Tyre Nichols: Sixth police officer fired
Liz Truss: I was never given realistic chance to enact tax cuts
Alec Baldwin charged with involuntary manslaughter in Rust shooting
Republicans oust Ilhan Omar from powerful House committee