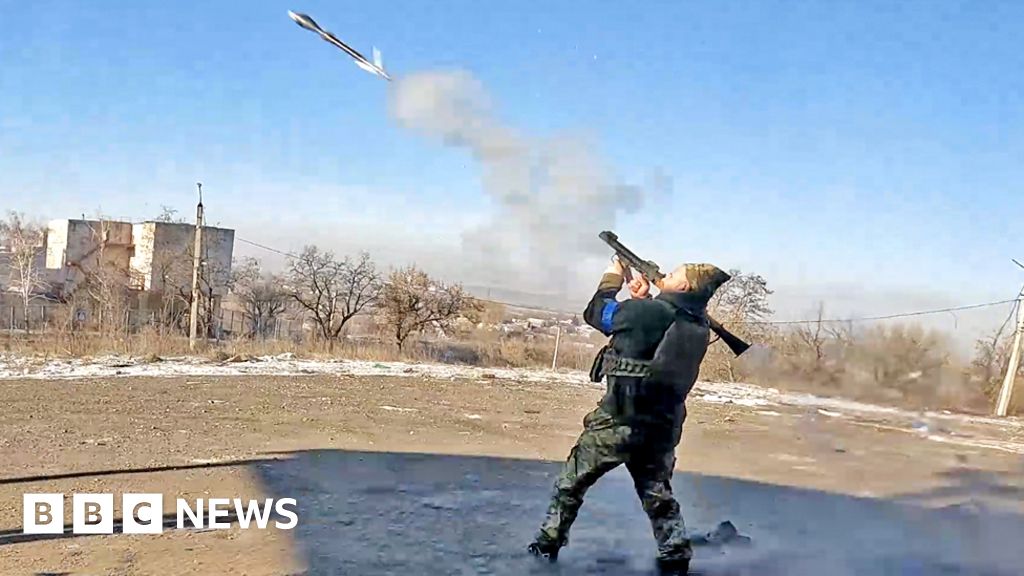 Ukrainian forces have acknowledged “stepping back” from the bitterly contested Donbas town of Soledar, captured by Russian forces last week in their first significant victory after many months in retreat. But soldiers have told the BBC they’ve pulled back in a controlled and tactical move before a planned counter-attack.

Long bursts of automatic gunfire rattled across the grey, stubbled fields on the front line between Soledar and the neighbouring town of Bakhmut, during an intense gun and artillery battle.

“It’s quite close. One kilometre,” said a tall Ukrainian unit commander named Andriy, peering around the corner of a ruined cottage and towards a dark line of trees to the east.

It was impossible to be sure what was happening. But the sound of automatic gunfire, zinging overhead, in addition to the constant boom of rockets and artillery, suggested that Russian infantry were close. A press officer for the 46th Air Assault Brigade, who was accompanying us on a visit to the area, said the front lines were constantly shifting, unpredictably, sometimes by several kilometres a day.

“We have a tough situation here,” Andriy acknowledged, before slipping into a well-disguised command bunker hidden amid the ruins. His team had just received detailed information about a Russian armoured personnel carrier (APC), spotted by a Ukrainian drone. Moments later, there were three loud outgoing blasts from a nearby UK-supplied light artillery piece, used here by Ukrainian forces, and aimed at the vehicle.

The fighting in and around Soledar has been some of the heaviest of the war, with Russian forces – spearheaded by the mercenaries and convicts of the Kremlin’s Wagner group – reportedly suffering heavy losses but finally succeeding in taking control of the small hill-top town, now a wasteland of flattened buildings and rubble.

Privately, some Ukrainian soldiers have blamed poor co-ordination between different units for the loss of Soledar and have acknowledged that Russia may now be better placed to encircle the far bigger and strategically more important neighbouring town of Bakhmut, to the south.

But the mood among front line units in villages like Paraskoviivka, now just a few hundred metres from Russian positions, appears to be quietly confident. Furious Ukrainian air and artillery bombardments appear to be blocking Russian attempts to move forward both from the north and from the south-western outskirts of Bakhmut.

“It’s a controlled situation. I believe in my commander. Sometimes it’s really better to take a step back… then after that to make a [counter] attack and crush the enemy. Each day we’re destroying enemy positions,” said Andriy.

On a grey morning this week, a light thaw turned the snowbound country lanes on the northern edge of Bakhmut into muddy tracks. During winter there is precious little cover from trees and bushes, leaving many roads visible and vehicles exposed to Russian artillery fire.

As we took cover behind a small cottage, a shell crashed into the road 300m behind us. Our military escort said the fighting had reached a new pitch of intensity, with the boom of rockets and artillery fire coming every few seconds, amid the wail of sirens from Ukrainian ambulances whisking the wounded back to a field hospital.

“We have gun(shot) wounds, we have shrapnel wounds. The fighting here seems to be particularly intense. We also have (cases of) frostbite and flu. And people are tired,” said Dr Andriy Zholob, the commander of the 46th Brigade’s medical unit. But he insisted morale among the soldiers remained high.

“They’re tired, they’re cold, they’re wounded. But they ask me, ‘Doc, when can I return?’ They don’t want to say – ‘I’m wounded, now I can relax.’ Their hearts are burning still. We have work to do,” said Dr Zholob, scrolling through a video showing him removing mortar shrapnel from a soldier’s shoulder.