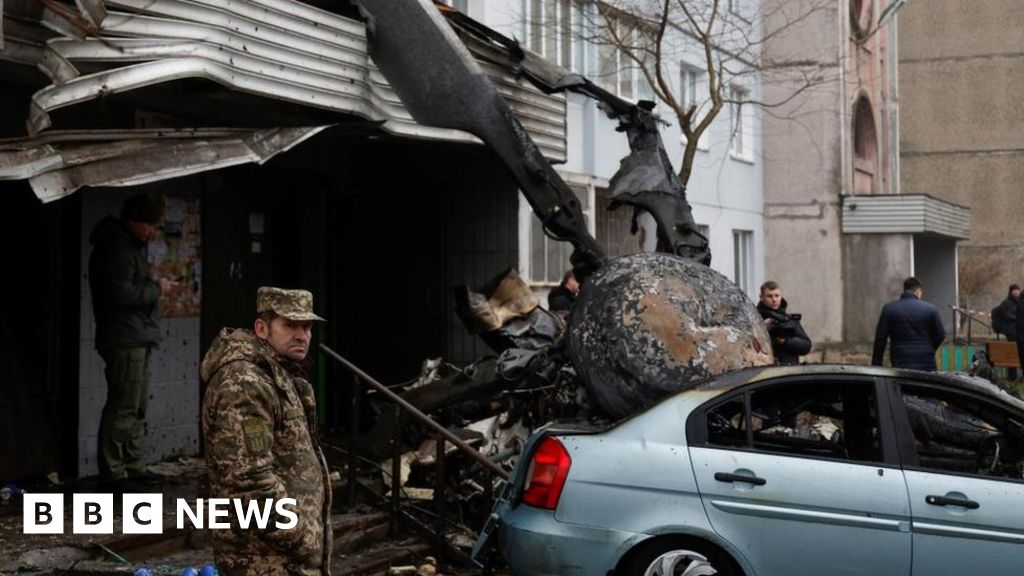 The three main figures in Ukraine’s interior ministry have been killed in a helicopter crash beside a nursery in an eastern suburb of the capital Kyiv.

Nine people were killed when the helicopter came down in Brovary and another nine died on the ground, including three children.

Mr Monastyrsky is the highest profile Ukrainian casualty since the war began.

The deputy head of Ukraine’s presidential office, Kyrylo Tymoshenko, said the minister had been en route to a war “hot spot” when his helicopter went down.

There is no indication the crash was anything other than an accident, although witnesses said Russia’s war was to blame for the disaster.

“It was very foggy and there was no electricity, and when there’s no electricity there are no lights on the buildings,” local resident Volodymyr told the BBC.

The 42-year-old interior minister was a prominent member of President Volodymy Zelensky’s cabinet. He played a key role in updating the public on casualties caused by Russian missile strikes since Ukraine was invaded in February 2022.

Ukrainian reports said those on board the helicopter included six ministry officials and three crew.

First deputy minister Yevhen Yenin died along with state secretary Yurii Lubkovich, whose task was to organise the work of the ministry.

Mr Tymoshenko said the interior ministry’s work would not be affected by the loss of its leaders.

His friend and MP Mariia Mezentseva said it was a tragedy for everyone as Mr Monastyrsky’s ministry had a significant role in Ukraine’s response to the invasion.

“He responded 24/7 to his colleagues, friends and family. He was very close to President Zelensky from day one of his presidential campaign,” she told the BBC.

National police chief Ihor Klymenko wrote on Facebook that the helicopter belonged to Ukraine’s state emergency service, while other officials said it appeared to a be a French Super Puma aircraft.

“There was a huge flash,” said a woman described as a teacher at the kindergarten.

“Before that there was the sound of something flying in the air, and we all went quiet. Then, after the flash, we heard an explosion. We lay down, and then quickly evacuated to a shelter.”

After the crash a fire broke out close to the kindergarten and children and staff were moved from the building. Wreckage from the helicopter was visible outside a burning building.

Interior ministry adviser Anton Herashchenko said all three men were friends and statesmen who had worked to make Ukraine stronger.

“We will always remember you. Your families will be cared for,” he said on Facebook.

Ms Mezentseva said she had initially thought that the disaster was fake news: “But unfortunately it’s true.”

Inside the Happy Valley house
Dangerous ice storm sweeps parts of southern US
Why would China use a spy balloon when it has satellites?
FBI search President Biden’s Delaware home over classified documents
Dominic Raab bullying probe another ticking time bomb under PM