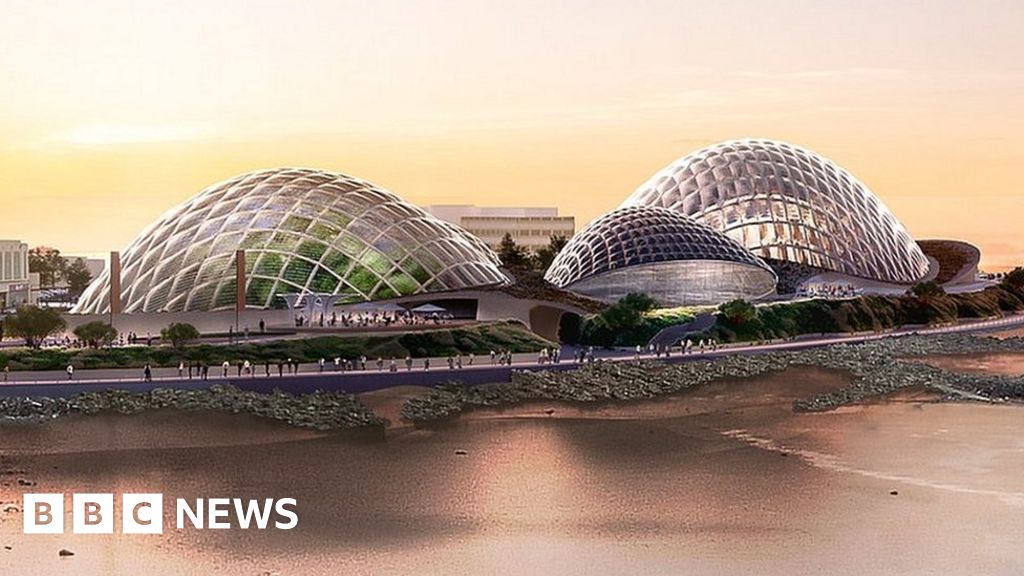 The government has set out more than 100 projects which will get a share of £2.1bn of levelling up funding.

The Eden Project in Morecambe, train services in Cornwall and a number of town centres are among the projects set to get funding.

But Labour said it was “a partial refund” on what the Tories “have stripped out of our communities”.

The idea of “levelling up” – or reducing regional inequality – was a key part of Mr Johnson’s 2019 election campaign. Its aim was to close the gap between rich and poor parts of the country by improving services such as education, broadband and transport.

A total of 111 areas across the UK have been awarded money from the second round of the government’s Levelling Up Fund.

The Eden Project in Morecambe, Lancashire, will get £50m to help regenerate a derelict site on the seafront into an eco-tourism attraction.

There will also be a £50m grant to build a new direct train service linking Cornwall’s largest urban areas.

Mr Sunak’s own constituency of Richmond, in North Yorkshire, will get £19m to develop the Catterick Garrison town centre.

Other projects set to get funding include:

Rishi Sunak will attempt to get some national bang for his regional buck.

In other words, when a prime minister fronts a series of local announcements about spending, they generate attention locally.

But unless an overarching message is attached, the big picture message, or vision, from the centre, might get lost.

Mr Sunak is attempting to own the idea of “levelling up” – a Boris Johnson-era catchphrase focused on geographical inequality.

And there is more than a hint of the earliest skirmishes of a general election campaign in his day of dashing around various parts of the north-west and north-east of England.

There are plenty of keenly fought electoral battlegrounds nearby – and those battles are under way.

The political challenge for the government is the desire to “‘level up” as they put it, is a project whose timeframe is longer than an electoral cycle.

How quickly can you prove you have made a difference?

Intent counts for something. Delivery for much more.

Conservative party campaign headquarters have denied reports they have told MPs in marginal seats to stop using the phrase “levelling up” due to concerns the public do not know what it means.

A Conservative source told the BBC that MPs had “been told the precise opposite” and had instead been told how best to use the phrase based on the party’s opinion research.

The BBC has been told that, for example, MPs have been told not just to talk to constituents about how much money has been spent, but instead to talk about specific things that have changed for their area.

“By reaching even more parts of the country than before, we will build a future of optimism and pride in people’s lives and the places they call home,” he added.

Levelling Up Secretary Michael Gove said the investment would “revitalise communities that have historically been overlooked but are bursting with potential”.

But Labour’s shadow levelling up secretary Lisa Nandy said the fund had been “beset by delays and allegations of favouritism”.

“And despite today’s announcement, communities across the country are still paying a Tory premium for the last 13 years,” she said.

“It takes an extraordinary arrogance to expect us to be grateful for a partial refund on the money they have stripped out of our communities, which has decimated vital local services like childcare, buses and social care.

“It is time to end this Hunger Games-style contest where communities are pitted against one another and Whitehall ministers pick winners and losers.”

Kevin Bentley, from the Local Government Association, said: “Levelling up should be locally led by evidence of where crucial investment needs to go to, not based on costly competitive bids between areas.”

He also warned fulfilling projects had become more challenging due to rising inflation and costs.