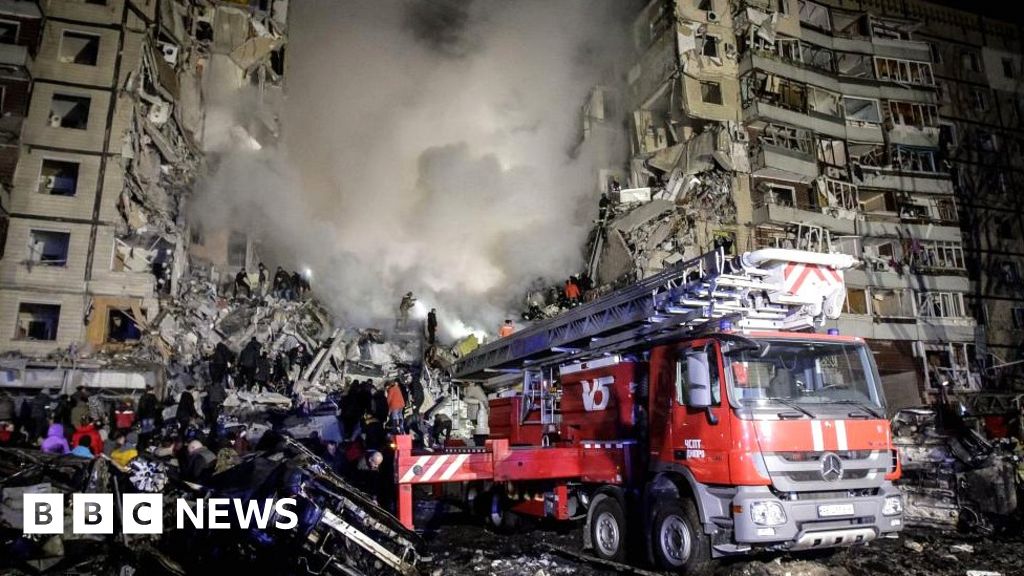 Russia launched fresh waves of missile attacks across Ukraine on Saturday, killing at least five people in a strike on an apartment block in the eastern city of Dnipro.

A number of other cities, including Kyiv, Kharkiv and Odesa, were also hit.

Much of Ukraine is now under an emergency blackout after missiles hit power infrastructure in several cities.

Earlier, the UK said it would send Challenger 2 tanks to Ukraine to help the country’s defence.

Russia responded by saying that providing more weapons to Ukraine would lead to intensified Russian operations and more civilian casualties.

“What is needed for this? Those weapons which are in the depots of our partners and which our soldiers are waiting for so much”, he said in his nightly video address, adding that his forces shot down more than 20 out of 30 Russian missiles fired at Ukraine.

The strike in Dnipro hit the entrance of a nine-storey building, turning several floors into smouldering rubble, and leaving nearly 40 injured , including seven children, Ukrainian officials said, in what is likely to be the worst attack in months.

A sizeable crowd gathered to watch the rescue effort at the site of the strike, while others joined rescue workers in a desperate search for survivors. There were urgent calls, human chains of volunteers clearing rubble and torch beams piercing thick clouds of dust and smoke.

In his address, Mr Zelensky said debris clearance in Dnipro would continue all night: “We are fighting for every person, every life.”

There is no information yet on why the apartment block was the object of such devastation, as it is some distance from the nearest power facility.

On a day when Russia seemed intent, once again, on targeting Ukraine’s energy grid, this could have been one of the less accurate missiles in Russia’s arsenal, or something brought down by Ukraine’s air defences – although on the face of it, this seems a less likely explanation.

It has been two weeks since the last wave of Russian attacks on Ukraine’s power grid. Mr Zelensky said of the energy infrastructure facilities hit on Saturday that the most difficult situation was in the Kharkiv and Kyiv regions.

Officials, in the West and in Ukraine, had begun to wonder if Russia’s “energy war” might be coming to an end, due to a possible shortage of suitable missiles and the evident fact the strategy has yet to break Ukraine’s spirit.

Saturday’s attacks suggest Moscow still thinks it is a tactic worth pursuing.