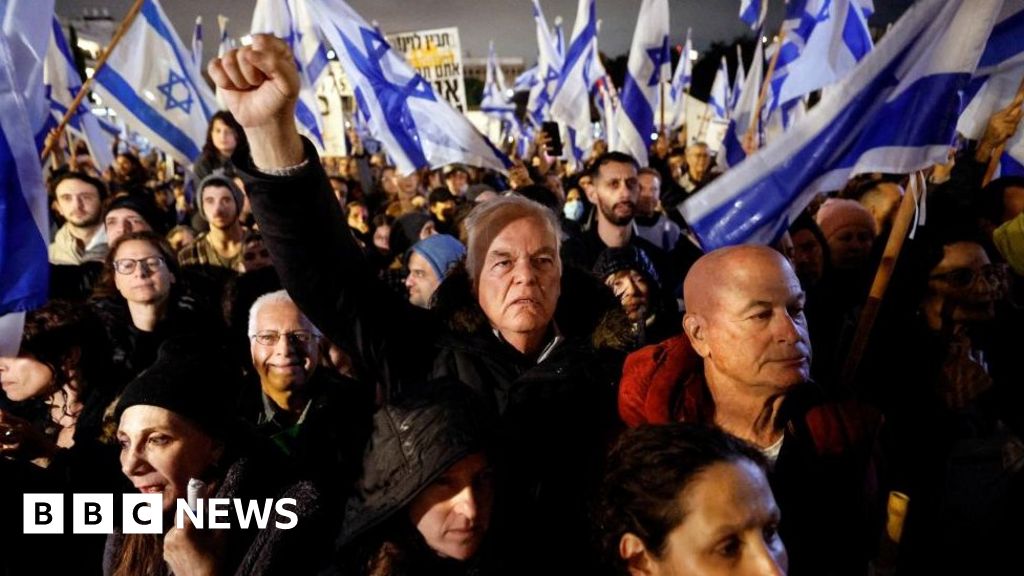 More than 80,000 Israeli protesters have rallied in Tel Aviv against plans by the new right-wing coalition government to overhaul the judiciary.

The reforms would make it easier for parliament to overturn Supreme Court rulings, among other things.

It follows the instalment of the most religious and hardline government in Israeli history.

Rallies were also held outside the prime minister’s residence in Jerusalem and in the northern city of Haifa, local media reported.

One group of protesters clashed with police while attempting to block a major road, Ayalon highway, in Tel Aviv.

Banners referred to the new coalition led by Mr Netanyahu as a government of shame.

Among those opposed are Israel’s Supreme Court chief justice, Esther Hayat, and the country’s attorney-general.

The BBC’s Samantha Granville in Tel Aviv saw protesters draped in Israeli flags, carrying posters in Hebrew, and pictures of Mr Netanyahu with X’s over his mouth.

There was a group of young girls with red-painted hand prints over their mouths. They wanted to tell the government they won’t be quiet.

One woman, who asked not to use her name, said through her tears she was a second-generation Holocaust survivor.

“My parents immigrated from non-democratic regimes to live in a democracy,” she said. “They came from the totalitarian regime to live freely. So seeing that destroyed is heart-breaking.”

She and her friend said they expected Mr Netanyahu to try radical changes, but never thought they would come so fast.

These are the largest demonstrations since Mr Netanyahu’s new coalition government was sworn in, in December.

Opposition parties had called on Israelis to join the rallies to “save democracy” and in protest at the planned judicial overhaul.

Under the plans announced by Justice Minister Yariv Levin earlier this month, a simple majority in the Knesset (parliament) would have the power to effectively annul Supreme Court rulings. This could enable the government of the day to pass legislation without fear of it being struck down.

Critics fear the new government could use this to scrap Mr Netanyahu’s ongoing criminal trial, although the government has not said it would do that.

Mr Netanyahu is being tried on charges of bribery, fraud and breach of trust – something he strongly denies.

The reforms would also give politicians more influence over the appointment of judges, with most members of the selection committee coming from the ruling coalition.

If it passes into law, the plan could make it easier for the government to legislate in favour of Jewish settlements in the occupied West Bank without worrying about challenges in the Supreme Court.

Israel has previously highlighted the power of the court to rule against it, as a way of blunting international criticism of such moves.