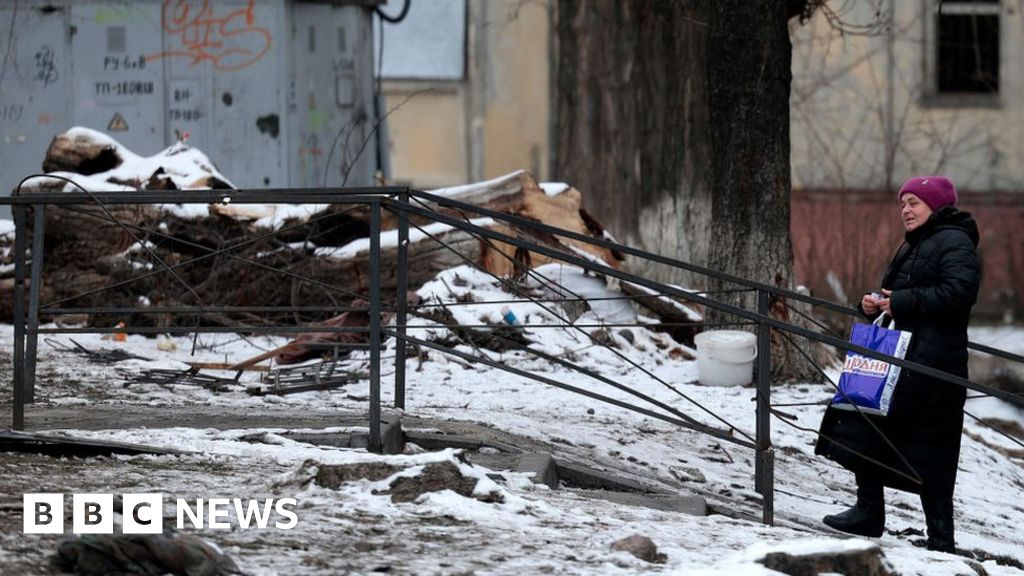 He said many regions were affected, and the local authorities warned that about half of the Kyiv region would remain without electricity in the coming days.

No casualties were reported.

Ukraine is now seeing snow and sub-zero temperatures in many regions, and millions are without electricity and running water. There are fears that a number of people may die of hypothermia.

In a separate development on Tuesday, the governor of Russia’s Kursk region said a drone attack on an airfield set ablaze an oil storage tank.

There were no casualties, said Roman Starovoyt. He did not say who could be behind the attack in the region that borders Ukraine.

In his video address late on Monday, President Zelensky said 70 Russian missiles were fired on Monday, and “most of them were shot down”.

The Russian defence ministry said it hit all 17 of its intended targets during its “massive strike using high-precision weapons”.

He said “the biggest number of shutdowns is in Vinnytsia, Kyiv, Zhytomyr, Dnipropetrovsk, Odesa, Khmelnytskyi and Cherkasy regions”, referring to the regions spanning the length and breadth of the country.

But he pledged that the authorities “will do everything to restore stability”.

Mr Zelensky said electricity supplies were also affected in neighbouring Moldova, proving that Russia’s actions were “a threat not only to Ukraine, but also to our entire region”.

Warnings that Russia was planning a fresh wave of hits have been circulating for several days. They eventually arrived just hours after a series of explosions at two military airfields deep inside Russia, which Moscow blamed on Ukrainian drones intercepted by Russian air-defences.

Three servicemen were killed and two aircraft were lightly damaged at the airfields in the Ryazan and Saratov region, the Russian defence ministry said.

Ukraine has not publicly commented on the issue.

The two airfields – hundreds of kilometres from Ukraine’s border – house Russian strategic bombers that have been used to carry out missile attacks since Moscow’s full-scale invasion of Ukraine began on 24 February.

Before the latest Russian strikes, officials in Kyiv were talking about moving from highly disruptive emergency blackouts, which often last for many hours, to more manageable scheduled power cuts which offer civilians some badly needed predictability.

Moscow has been battering Ukraine’s power grid since 10 October, following a string of heavy military defeats on the battlefield.

Some Western leaders have called the strategy a war crime, because of the huge amount of damage caused to civilian infrastructure.

Experts have told the BBC that Russia’s tactic of hitting energy infrastructure is most likely designed to demoralise and terrorise the population, rather than gain any concrete military advantage.

Moscow has repeatedly denied the allegations.