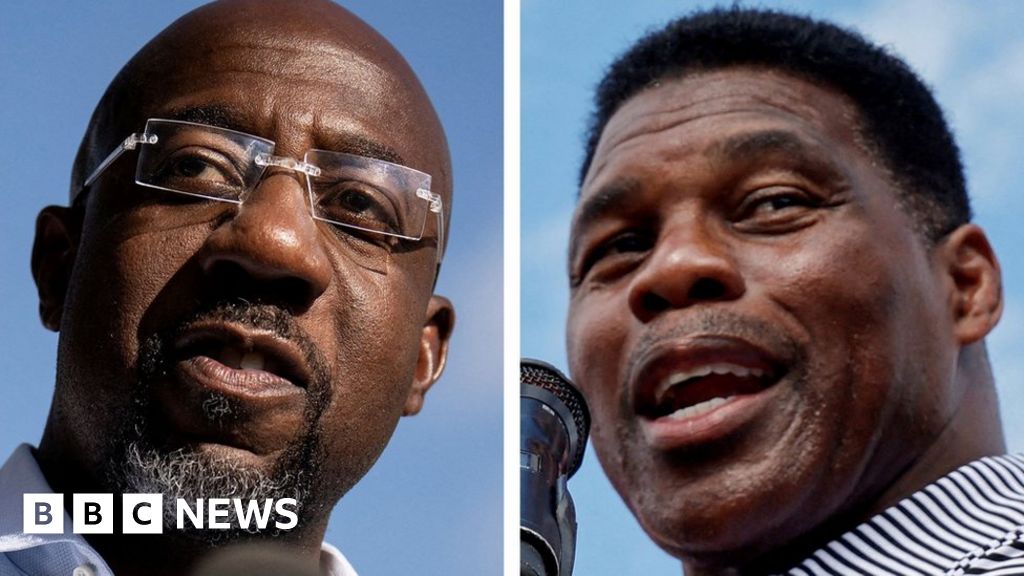 On Tuesday, Georgia’s seven million registered voters will go to the polls for the fifth time in four years.

That’s thanks to a quirk in the state’s election law that requires winning candidates for state-wide posts in general elections not just to get more votes than everyone else, but to get fifty percent of the votes cast.

Twice in the past four years candidates from both parties have fallen short of that mark. Hence the need for a run-off election in 2021 for both Georgia’s US Senate seats and another one this time around.

Incumbent Democrat Raphael Warnock, a southern Baptist preacher from Dr Martin Luther King Jr’s old church in downtown Atlanta, will face the Republican former football star Herschel Walker, a man backed by former President Donald Trump who has faced accusations that he paid for wives and girlfriends to get abortions despite avowing a profoundly anti-abortion stance.

The pair will go head to head for the chance to represent a state that’s been at the epicentre of political upheaval in recent times.

True, the midterm elections have already decided 99 of the 100 seats in the Senate and the Democrats have 50 to the Republicans 49. Given the constitutional rule that the vice-president can break a tied vote in the chamber, Georgia’s run-off will not change who has control.

So, you might wonder, why does Georgia’s run-off matter? On the most basic level of course, having 51 senators is better than having 50.

It means you can lose one supporter over a thorny issue and still get your way. That’s going to be a factor in the case of senators like Joe Manchin, a conservative-minded Democrat from a thoroughly Republican state, West Virginia, who is up for election in 2024.

Senator Manchin has already shown how he holds enormous sway in the detail of legislative negotiations in the current Congress, and to defend his seat in 2024, he’ll need to demonstrate to his conservative-minded constituents he’s no Joe Biden groupie.

Having 51 senators also means you have more control over the arcane workings of the chamber’s committee structures. And you can more easily get your way when it comes to one of the Senate’s key jobs – to approve nominations of judges to the federal bench – a deeply political process in this deeply political country.

Which all means that while the big motivating factor, Senate control, is already decided, the parties have still been pouring tens of millions of dollars into this race and the television advertising is at a fever pitch.

There is a direct correlation between the tightness of the race and the viciousness of the advertising.

The two men are separated by at most a percentage point or two, so every vote counts. Both sides have been slugging it out over the airwaves, spending an estimated $70m (£57m) in the process. Both have targeted one another’s character and personal lives.

The Walker camp have screened clips supposedly showing Raphael Warnock’s ex-wife in tears after a domestic disagreement. They’ve accused him of overseeing a camp for disadvantaged young people where “urine was thrown at the children” and of being in charge of apartments for poorer people “full of human faeces and even rotting corpses”.

As for the Warnock camp, his ads have accused Herschel Walker of “wearing lies like a badge of honour”. They allege he lied about his education, his charitable giving, his business career and a bizarre episode involving the former football star appearing to claim he’d worked in law enforcement when he had not.

Associated political surrogates and action committees have gone after Mr Walker over troubling claims of abuse and the alleged hypocrisy over abortion. In many ways, it’s astonishing he’s still polling so close in the race given the amount of negative stories floating around. It’s a sign of just how tribal such races can be that supporters can stick with him.

However, there are worrying signs for Mr Walker when you look at the numbers. He was the only Republican running state-wide on 8 November not to get more than fifty percent of the vote. That means significant numbers of Republicans explicitly chose not to support him.

His problem with more moderate Republicans was rather publicly illustrated after the outgoing Republican Lieutenant-Governor Geoff Duncan announced to the world that he’d stood in line for an hour in early voting this week and then – at the ballot box – couldn’t bring himself to vote for Mr Walker.

But Raphael Warnock cannot rest on his laurels. Both he and fellow Democrat John Ossoff may have won their run-offs at the beginning of 2021, but those victories bucked the historical trend which has seen Republicans improve their vote in a majority of run-offs since the 1960s in Georgia, according to analysis by Five Thirty Eight.

Conversely of course, having no other Republicans on the ballot this time may make it harder for Mr Walker to persuade party members to come out to vote at all, and he may not have done himself any favours by taking five days off over Thanksgiving in the crucial final push.

He has also struggled to attract significant big hitters to campaign for him; former Secretary of State Mike Pompeo passing for a sprinkle of stardust this week. Whereas Raphael Warnock has managed to get former President Barack Obama out for him and the former first lady Michelle Obama has also appeared in campaign ads.

Donald Trump, despite being a vocal backer of Mr Walker, even mentioning him in his Mar-a-Lago presidential bid announcement, has not travelled to support the candidate in person and many will scrutinise the final numbers to see what message there could be for the prospects of his presidential run.

Most of all, after Tuesday’s vote, Georgians will be able to breathe a sigh of relief and savour the fact that, for almost two years, they won’t have to fill in ballot forms, stand in line or endure the relentless, pugilistic scrap that passes for politics in the Peach State.