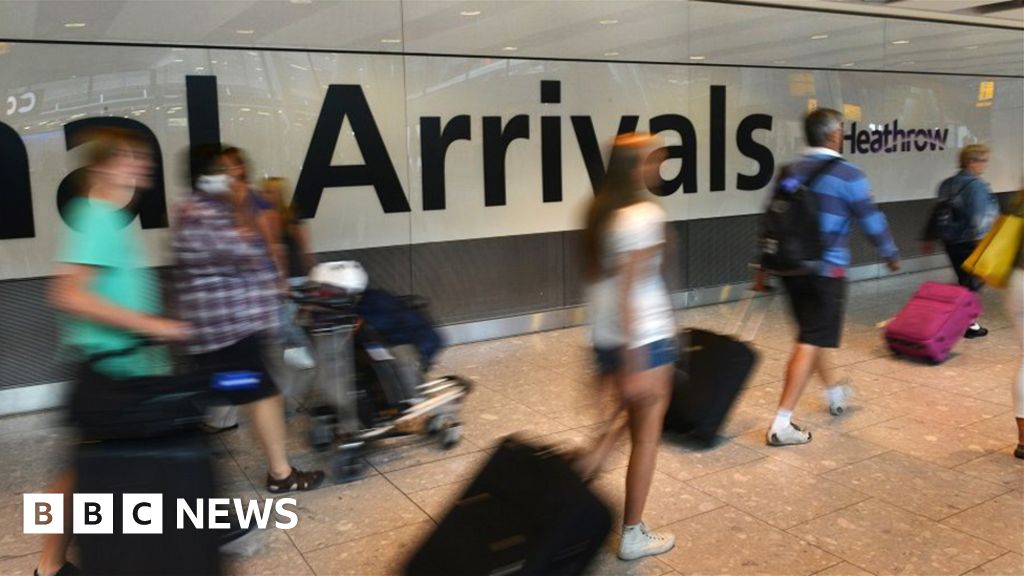 UK net migration hit 504,000 in the year to June – the highest figure ever recorded, The Office for National Statistics (ONS) estimates.

The rise is driven by people arriving legally from outside the EU and the resumption of post-pandemic travel.

Reception of Afghan and Ukrainian refugees and people from Hong Kong are other factors.

The government has promised to cut net migration – the difference between the numbers entering and leaving the UK.

Today’s figures will intensify debates over the role of overseas workers into the UK economy and wider labour market – weeks after Home Secretary Suella Braverman said she wanted to resurrect a repeatedly missed government target to reduce net migration to below 100,000.

That aim, set by former prime minister David Cameron and supported by Theresa May, was dropped by Boris Johnson who said he would reduce the level while ensuring businesses had access to the skills they needed.

Home Secretary Suella Braverman said the record numbers were “understandable” given the circumstances in Ukraine, Afghanistan and Hong Kong, and the “generosity of the British people”.

“But the public rightly expect us to control our borders and we remain committed to reducing migration over time,” she said.

Ms Braverman said the current level of migration was putting pressure on accommodation and housing supply, as well as health, education and other public services.

Shadow Home Secretary Yvette Cooper acknowledged there were some unique factors behind this year’s figures, but said there was also “real evidence of Conservative mismanagement of both the asylum and immigration systems”.

She said the Conservatives “just don’t have a grip” of the skills shortage or small-boat asylum cases, saying: “We need action on that, and instead we are not seeing it from the Conservatives.”

Overall, an estimated 1.1m people migrated to the UK in the year to June. After subtracting those who emigrated, the UK population has risen by 504,000 – the net migration total. That is a record – a jump from a high of more than 330,000 seen in 2016, the year of the Brexit vote.

Asylum applications, including those arriving in small boats over the English Channel, reached 73,000 in the year to September – a figure that underlines that those migrants represent a very small proportion of all those who arrive in the country in any given period.

The rise in migration has been influenced by people from outside the European Union – including 170,000 people from Ukraine and 76,000 from Hong Kong under a scheme to resettle people who count as British citizens.

Some 277,000 people came to study – with the rate of student visas almost doubling on the previous year.

The ONS said that the lifting of travel restrictions may have triggered a bump in the number of students – and it was too early to say whether the rise was a long-term trend. The figures are also partially experimental as experts refine more sophisticated ways of counting people.

Madeleine Sumption, director of Oxford University’s politically independent Migration Observatory research unit, said: “All the forecasts suggested that migration would fall as a result of the post-Brexit immigration scheme, which greatly restricted the options for EU citizens to move to the UK – and indeed, EU net migration remains negative.

“But non-EU migration has risen, primarily not because of the policies designed to replace EU free movement.

“The humanitarian routes for Ukraine and Hong Kong and a rebound in international students have played the largest role in boosting immigration levels.

“These unusually high levels of net migration result from a unique set of circumstances following the war in Ukraine and the recovery from the Covid-19 crisis.

“We cannot assume they represent a ‘new normal’, and it would be rash to take major policy decisions based only on these numbers.”

Separate figures published by the Home Office reveal that a record 143,000 people are now awaiting an outcome on their asylum claim, thanks to delays to decision-making.

Around 41,000 of them have been waiting for between one and three years for a decision, according to separate research.

In one example of delays, new figures show that just 50 of 7,219 Albanians who arrived by small boats have received a decision on their claim for asylum.

Enver Solomon, head of the Refugee Council, said the figures underlined the urgent need for action from the government to make the system work.

“These statistics underline yet again the government’s neglect and mismanagement of the asylum system due to a failure to invest in creating an orderly, efficient and effective system,” he said.

“The number of men, women and children now living in limbo has risen by 20,000 in just three months.

“Ministers must set up a dedicated and well-resourced task force to improve the processing of asylum claims, both to reduce the human misery … but also the spiralling costs of accommodating those on the waiting list.”