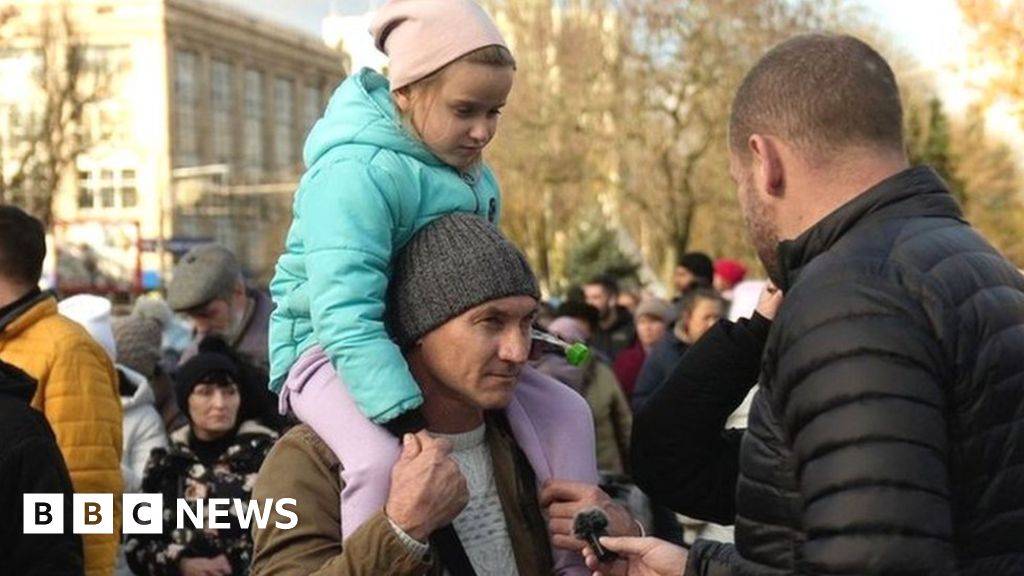 In the week since Russia pulled out of the southern city of Kherson, visceral relief has been replaced with an optimistic busyness.

As an acoustic band plays Western covers, queues of people snake around the city’s main square.

There are tents where residents can get a hot drink or first aid. Many gather at mobile phone masts like bees around honey.

“We’re calm now,” Kostiantyn tells me as he queues for food donations with his daughter on his shoulders. “No water or power is fine.”

The port city was captured by Russia in March, just days after forces invaded Ukraine. It was the only regional capital Russia managed to seize since February, but its military was forced to withdraw last week.

Also happy to chat was Olena, who admits to getting used to the Russian occupation.

“Now we can tell who is shelling and from where. If it’s the Ukrainians that makes us happy, we’re free now.”

“We have no light, no water but we have freedom!” exclaims Hryhorii Mykolayovych, who works in his local community kitchen.

He’s frying sliced courgette over a log stove outside a block of flats.

After I ask him how he is, he takes a deep swallow and says: “The shelling is a bit of a problem, but things will get better. All of this is temporary.”

The city’s governor hopes so too. Yaroslav Yanushevych says his priority is “making everyone feel safer”. He also wants every Russian collaborator to be “punished”.

In a picture of “cause and effect”, bread is handed out under pro-Moscow billboards which read “Together with Russia”.

They were plastered across the city by Russian occupiers. Most have been torn down, but not all.

These humanitarian efforts are being gratefully received. It’s clear they’re desperately needed after Kherson was cut off by Russia’s grasp for eight months.

However, for the estimated 75,000 people who chose to stay in Kherson, a lot more is needed for this city to get back on its feet.

It is, though, slowly reconnecting with Ukraine.

Lorries instead of tanks now move into the city along damaged roads. Train services between Kyiv and Kherson have also resumed.

While there is relief Kherson wasn’t destroyed like other occupied cities, such as Mariupol, no one is thinking the danger has gone away.

The sandy banks of the Dnipro River in Kherson are now the front line in this part of Ukraine.

Six hundred metres across is territory occupied by Russia. The thuds of artillery and whistling shells overhead illustrate how dangerous this part of the city has become.

Despite its appearance, this boundary is far from clear. In pulling out, the Russians left thousands of soldiers and collaborators behind.

It’s also not clear whether Ukraine’s counteroffensives will stop here, despite winter being round the corner.

For Kherson, liberation has not brought calm. But for the majority, it is “better than before”.