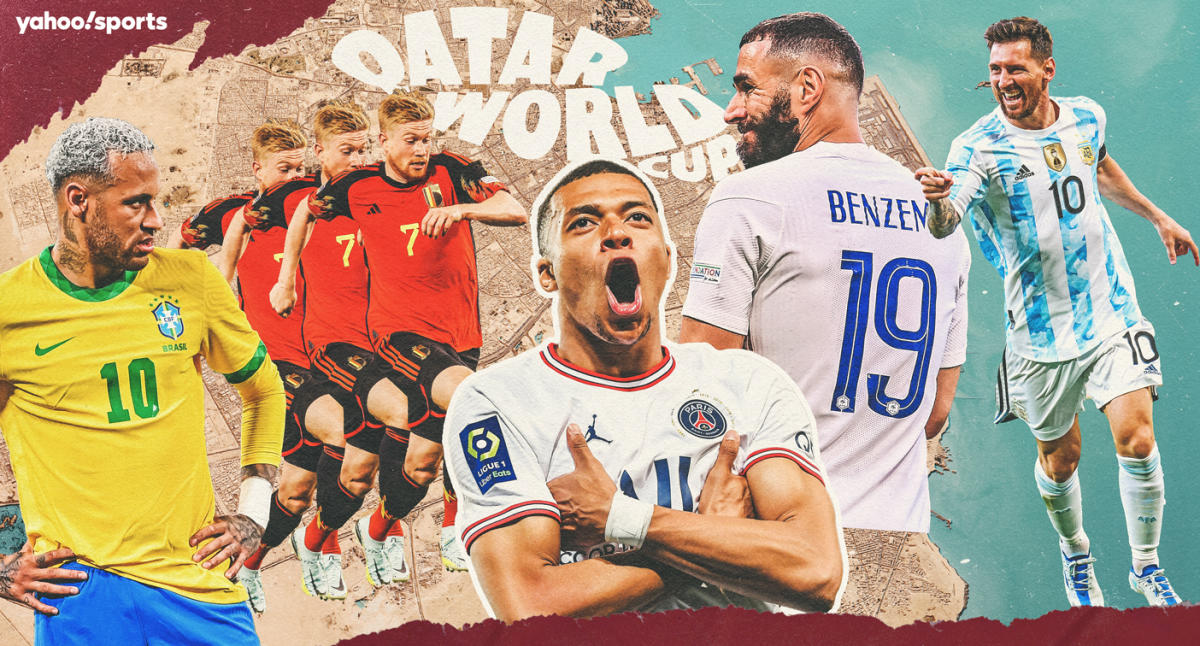 The World Cup is officially underway in Qatar. The first game was Sunday as Ecuador spoiled Qatar’s debut in the international tournament. As you get prepared for this awkwardly timed tourney, here are 30 of the best players in the world to keep an eye on in November and December.

(Note: This list has been updated since it was first published to reflect the announcements that Sadio Mane (No. 13) and Karim Benzema (No. 3) would miss the World Cup due to injury.)

The 22-year-old may seem like a surprise entry into this list but he’s set to play a massively important role for his country with Paul Pogba and N’Golo Kante out of the squad. His arrival ahead of the 2022 season along with Camavinga’s emergence made Real Madrid comfortable with selling Casemiro to Manchester United. If France makes a run through the knockout rounds despite all its injuries, Tchouameni will likely be a big reason why.

Eriksen and Denmark can reasonably be considered the co-favorites to win Group D given all of France’s injiury issues. And Eriksen’s return to international soccer is easily the best story at the World Cup after his cardiac arrest at Euro 2020 last summer. Eriksen is the leader and midfield maestro of a Danish squad that may no longer be considered a dark horse given all of the attention it’s received as a sleeper pick to win the World Cup.

The reigning Serie A MVP has been awesome for AC Milan … and mostly a non-factor for Portugal. Surely, with Diogo Jota injured and Cristiano Ronaldo fading, that has to change at the World Cup.

The Manchester United vice-captain hasn’t been in the best club form so far this season. But he’ll play an important role for Portugal pulling the strings in midfield whether or not Cristiano Ronaldo starts up top. Fernandes is good enough to be Portugal’s best attacking player. It’s just a matter of if he can find his form.

Born in Germany to a Nigerian father, then raised in England, Musiala left Chelsea to join Bayern Munich at age 16. He also opted to play for the German national team. And both club and country are glad he did. An attacking midfielder who can score, dribble and create, he’s been the breakout star of the past 24 months in the Bundesliga, and could announce himself to a broader audience in Qatar.

Koulibaly missed nearly the whole month of September due to injury, but has played in five games for Chelsea since the start of October. The 31-year-old is a rock on the back line and a towering presence at 6-5. Senegal won the 2021 Africa Cup of Nations and gave up just two goals during the whole tournament.

The PSG captain has made 71 appearances for the Brazilian national team and is their top defender. Brazil will be a nightmare for opposing teams going forward but will also be very good in defense thanks to Casemiro and Marquinhos through the middle. He may be overshadowed in Brazil’s lineup, but don’t discount his importance to the team’s favorite status.

Sané has been phenomenal for Bayern Munich so far this season with nine goals in 16 games. He suffered a hamstring injury in October but is back on the field and should be at full fitness for the World Cup. Sané made just one start for Germany in the 2020 Euros but should be an integral part of the team this fall and could easily be Germany’s leading goal-scorer.

Not only a stalwart defender at right back, but one of Morocco’s best ball-progressors and creators. He isn’t asked to carry much of an attacking burden at PSG; he will be in Qatar, and he’s capable of handling it.

Four years ago, when it wasn’t quite coming home yet, Foden was a primary reason it might someday. He’d won the Golden Ball at the U-17 World Cup. He hadn’t yet started a single game for Manchester City, but since, he’s become a rare homegrown killer on the wing. Now, if only Gareth Southgate could figure out how to get the best out of him …

Cancelo is a serviceable defender. He’s an absolute magician with the ball at his feet, and that’s why he’s ranked here. He can play on the left or the right, as an overlapper or an inverter, for Man City or Portugal. The question is whether Portugal can cover his defensive frailties and accentuate his attacking qualities like City does.

Lautaro is the perfect Messi partner. Quick and incisive, he’s also become a penalty-box savant, and upped his Serie A goal tally every season since moving to Inter Milan as a 20-year-old.

Rüdiger has fit right in at Real Madrid after moving over for Chelsea in the offseason on a free transfer. Rüdiger has made over 50 appearances since being called up to the German national team in 2014 and is now the team’s most indispensable central defender.

Alisson has established himself as one of the best goalies in the world in his time at Liverpool and enters as Brazil’s top keeper for the second straight World Cup. A fantastic distributor of the ball, Alisson will be relied on to start quick attacking plays against teams that are likely going to sit back against Brazil as much as possible.

The 19-year-old could find himself as the most important midfielder in England’s squad after he played a bit part in the team’s run to the Euro 2020 final. Bellingham has been fantastic for Borussia Dortmund in 2022 so far and it’s only a matter of time before an English team pays an exorbitant fee for him. He’s scored nine goals in 21 appearances across all competitions this season.

A diminutive, ingenious, mononymous midfielder is a key player for Spain; sound familiar? Pedri is not Xavi, of course — in fact, Xavi now coaches him at Barcelona, and has compared the 19-year-old to Andres Iniesta — but Pedri’s smarts, vision and tidiness on the ball are similar, and well beyond his years.

The fifth Real Madrid player on this list has arguably been Los Blancos’ best player so far this season. He has always been a powerful and technical player capable of driving a team forward from midfield; now he’s added bangers to his arsenal.

The shakiness of Courtois’ younger years has dissipated, and given way to a relatively undisputed truth: The 6-foot-7 Belgian is the sport’s best shot-stopper. (And he’ll need to be in Qatar. Belgium’s back three could crumble at any moment.)

Van Dijk and Liverpool have struggled so far this season but he’s still one of the best central defenders in the world and a massively important player to the Netherlands’ chances of advancing to the quarterfinals and beyond in the World Cup. He missed Euro 2020 while recovering from a torn ACL he suffered playing for the Reds.

Son has declared himself fit after suffering a fractured eye socket in Tottenham’s final Champions League group stage game in early November. Son hasn’t been as good this season as he was a season ago for Spurs, but he’s the key for a South Korea team that could get out of a group that includes Uruguay, Ghana and Portugal. Son has scored 35 times in 104 national team appearances.

This is likely the last World Cup for Croatia’s midfield maestro and he’ll once again play an integral role for his national team. Modric was fantastic in Real Madrid’s run to the Champions League title this spring and will be the man who everything revolves around for a Croatia team that appears weaker than the one that made a run to the final of the 2018 World Cup. But if Modric has one more stellar World Cup in him, then who can rule out another knockout round run?

Dias has established himself as one of the best center backs in the world at Manchester City, though Portugal will be playing a much different style than Pep Guardiola’s squad does. Dias is also even more important now that Pepe will likely miss the tournament because of a knee injury. If Portugal makes a run in the World Cup, it’ll be because of a strong defense anchored by Dias.

Very few players have simultaneously created as many marvelous goals and scored as many s***ty ones as Kane has. He is actually quite boring, especially off the field and often on it. But he is clever and clinical in the penalty box; he pops up in perfect positions, and also consistently outperforms Expected Goal metrics. He’s also adept when dropping into midfield, and if his name were Javier Caña, perhaps he’d be sufficiently celebrated as the visionary passer he is.

Soccer’s least flamboyant superstar is missable to the untrained eye but integral to Germany and Bayern Munich. He is, at once, a conductor and a protector, a progressive passer and an aggressive presser. He can excel in a frenzied game or a tactical one, and should excel in Qatar.

Neymar’s eventual heir has, in his fourth and fifth seasons at Real Madrid, begun to fulfill impossibly lofty expectations. His pace has always been lethal, and his dribbling audacious. Over the past 15 months, at age 21 and 22, he added goal creation and ascended into the sport’s elite. The challenge now is finding his footing in a stacked Brazil team that’s been built around others.

How much help will the Barcelona forward get in the 2022 World Cup? Poland finished last in its group and scored just two goals in 2018. Lewandowski is the team’s only reliable attacking threat and opposing defenses will be keying in on him to make sure that one of the best strikers in the world doesn’t beat them. If Lewandowski can single-handedly get Poland to the knockout rounds, he’ll only cement his status as one of the best strikers of the 2000s.

Perhaps his politics, tax payments and theatrics are all problematic. His soccer, though, remains stunning. I mean, just look at this:

Messi and Cristiano Ronaldo, the two greatest players ever, both seemed to be falling off cliffs last year … and then, as Ronaldo stayed fallen, Messi climbed back toward greatness. Through 18 games at PSG this season, he’s averaging 1.51 non-penalty goals plus assists per 90 minutes, on pace for the second-best mark of his sparkling career. He’s once again dazzling in an undefined creative role for both club and country, and finally has a coherent Argentine structure surrounding him. So, all things considered, his (likely) last crack at a World Cup might be his best.

The 23-year-old PSG star burst onto the scene as France won the 2018 World Cup. He’ll play a similar role on the outside and drifting into the middle of the field in 2022 but France’s strategy and tactics as a whole may have to change. France has tended to play a very defensive style under Didier Deschamps — a style that allows Mbappé to sprint past defenders on the counter attack — but Paul Pogba and N’Golo Kanté are set to miss the World Cup and stalwart defender Raphael Varane is also an injury doubt. Mbappe and Benzema could play more with the ball in 2022 out of necessity. And that may not be a bad thing at all.

There is so much about De Bruyne, from his ginger hair to his extreme shyness, that suggests he’s anything but the best soccer player on the planet. But there is so much about his game that suggests he is. He’s a goalscorer and an engine and a creative wizard and a Belgian Beckham all wrapped up into one. The national team around him is fading. But if there’s a player at this World Cup who can single-handedly propel a fading team to the semis, it’s this guy.