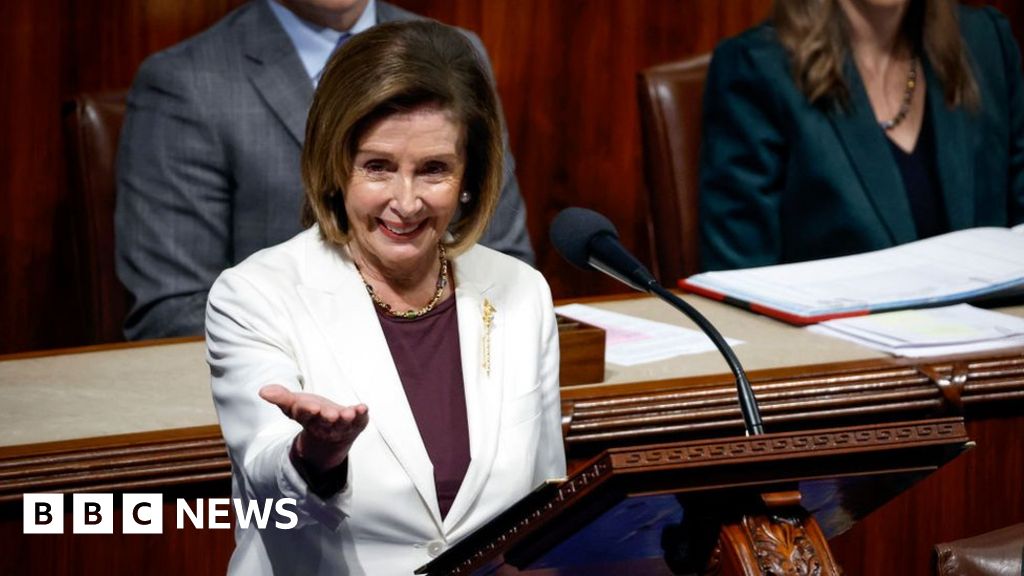 Nancy Pelosi, who has led Democrats in the US House of Representatives for almost two decades, has announced she is standing down from the role.

The 82-year-old is the most powerful Democrat in Congress and the first woman to serve as speaker of the House.

She will continue to represent her California district in the lower chamber of Congress.

It comes as Republicans are projected to take back control of the House following the midterm elections.

Republican Kevin McCarthy has won the party’s nomination to be speaker in the new Congress and is likely to succeed Mrs Pelosi.

“I never would have thought that someday I would go from homemaker to House speaker,” Mrs Pelosi said in a statement in the chamber on Thursday.

“I will not seek re-election to Democratic leadership in the next Congress. The hour has come for a new generation to lead the Democratic caucus,” she said.

Mrs Pelosi will serve as speaker until January when a new Congress takes over, and will remain in the seat she first took up in 1987 until January 2025.

New York congressman Hakeem Jeffries is widely expected to take up the top Democratic leadership post in the House, which would make him the first black congressional leader in US history.

Speaker of the House is the one congressional job detailed in the US Constitution. After the vice-president, it is next in line to the presidency.

The speaker and their deputies and committee chairs determine what bills are considered and voted on. They set the agenda and decide the rules governing debate.

Mrs Pelosi became minority leader, the title held by the person leading the opposition in the House, in 2003. The Democrats then took control of the House for the first time in more than a decade in 2006, and she became the first woman to lead a major party in either chamber of Congress.

An invaluable asset and a lightning rod

The first woman to lead a major party in either chamber of the US Congress, Nancy Pelosi will also go down in history as one of the most effective – an invaluable asset for Democrats and a formidable opponent for Republicans.

Her legislative acumen, her ability to keep a restless party united when it matters, and her instinct for political theatre have made her a force on Capitol Hill, as well as a lightning rod for criticism from her detractors.

Her speeches and press conference were hardly inspirational. But her ability to keep her fractious and often slim majority in the chamber together on key votes had few rivals.

Her political instincts were invariably sound, and her sense of legislative timing – when to push and when to wait and what it would take to win a vote – was impeccable. And she did it in an era where the House leadership had incentives, such as earmarked spending authorisations, to keep recalcitrant back-benchers in line.

Her strength has come at a price, however. It is in part because of these abilities that she became a hobgoblin of the right – a villain whose name or image headlined countless fundraising pitches and political adverts.

During the Capitol riot on 6 January 2021, supporters of President Donald Trump stormed through the Capitol building in search of the speaker and were photographed trashing her office and placing their feet on her desk.

The duration and depth of her grip on House Democrats, stretching over two decades, has also stunted the growth of younger leaders within the chamber, who have waited years to have their chance to move up in the party’s command structure. Now, at last, they may get their chance. But they will have large shoes to fill.

As speaker, Mrs Pelosi played a critical role in advancing – or thwarting – the agendas of multiple presidents.

She is widely credited with marshalling the passage of former President Barack Obama’s signature healthcare legislation, as well as bills to address infrastructure and climate change under incumbent President Joe Biden.

Mrs Pelosi also directly challenged Donald Trump throughout his presidency, famously ripping up a copy of his State of the Union address behind his back.

Rumours around her future had swirled in the aftermath of a violent break-in at her home last month that left her husband Paul, 82, in need of skull surgery.

Lawmakers gave her a standing ovation on Thursday as she thanked them for their prayers and spoke of her “beloved partner in life and my pillar of support”.

John Lawrence, a former chief of staff to Mrs Pelosi, told the BBC he expected her to play an important role in counselling new members of Congress and working with the White House now that Democrats were in the minority again.

“There’s never really a good time to leave,” he said. “When you’re in the ascendancy, you want to accomplish a great deal, and when things are going against you, you want to fight back.”

In a statement on Thursday, President Biden called Mrs Pelosi “the most consequential speaker of the House of Representatives in our history”.