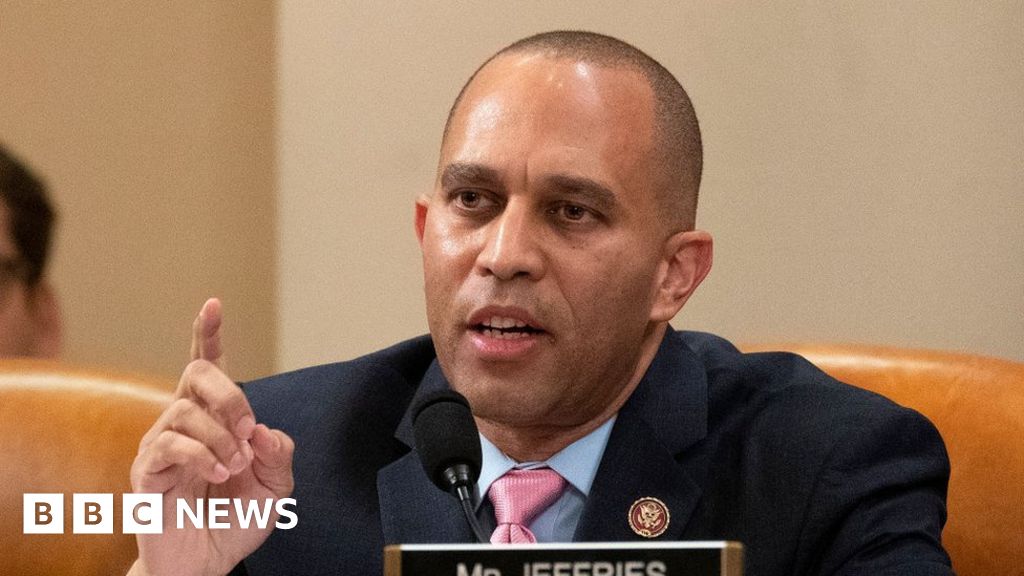 Nancy Pelosi, the most powerful Democrat in Congress, has stepped down. The man most likely to succeed her is New York lawmaker Hakeem Jeffries.

The 52-year-old has served in the fifth-highest rank of Democratic leadership since 2019.

Mr Jeffries’ widely expected ascent to the top spot would see him become the first black person to lead a party in the US Congress.

But he would be minority leader, not speaker.

Republicans regained a slim majority in the House of Representatives, the lower chamber of Congress, in last week’s midterm elections.

California Republican Kevin McCarthy, who currently serves as minority leader, has been nominated as the party’s choice to be House speaker.

But all eyes on Thursday were on Mrs Pelosi, 82, who took to the chamber floor and stood down from her post.

“The hour has come for a new generation to lead the Democratic caucus,” she said.

The move appeared to be co-ordinated with Mrs Pelosi’s top two deputies – Steny Hoyer, 83, and Jim Clyburn, 82 – who quickly followed suit by releasing statements on their future plans.

Both men offered endorsements for Mr Jeffries, with Mr Clyburn writing that his focus was “doing whatever I can to assist our new generation of Democratic Leaders, which I hope to be Hakeem Jeffries, Katherine Clark, and Pete Aguilar”.

Congresswoman Katherine Clark, 59, of Massachusetts is tipped to run for the post of whip, the number two Democratic leadership job. Pete Aguilar, 43, of California, currently vice-chairman of the caucus, is being talked about as successor to Mr Jeffries for caucus chairman.

The leadership shuffle may help quell complaints from some Democratic voters that their party’s leaders are too old.

But the trio of young up-and-comers is closely aligned with the party’s establishment wing, and Mr Jeffries in particular has been known to clash on occasion with his party’s left flank.

A lawyer who was born and raised in the Brooklyn borough of New York, he has represented the state’s eighth congressional district in the House since 2013.

He once paid tribute on the House floor to rapper The Notorious B.I.G., who was born as Christopher Wallace in Mr Jeffries’ district and gunned down in Los Angeles.

On the 20th anniversary of his death, the congressman said in 2017 that the hip hop artist represented “the classic embodiment of the American Dream” and rapped some lyrics from his 1994 hit single Juicy.

In a statement on Thursday, he lauded Mrs Pelosi as “the most accomplished Speaker in American history”.

“She has been the steady hand on the gavel during some of the most turbulent times the nation has ever confronted,” he wrote.

With Democrats retaining power in the upper chamber of Congress, Senate majority leader Chuck Schumer is likely to remain at his post. That could mean the Democratic leaders in both chambers of Congress will hail from the state of New York.