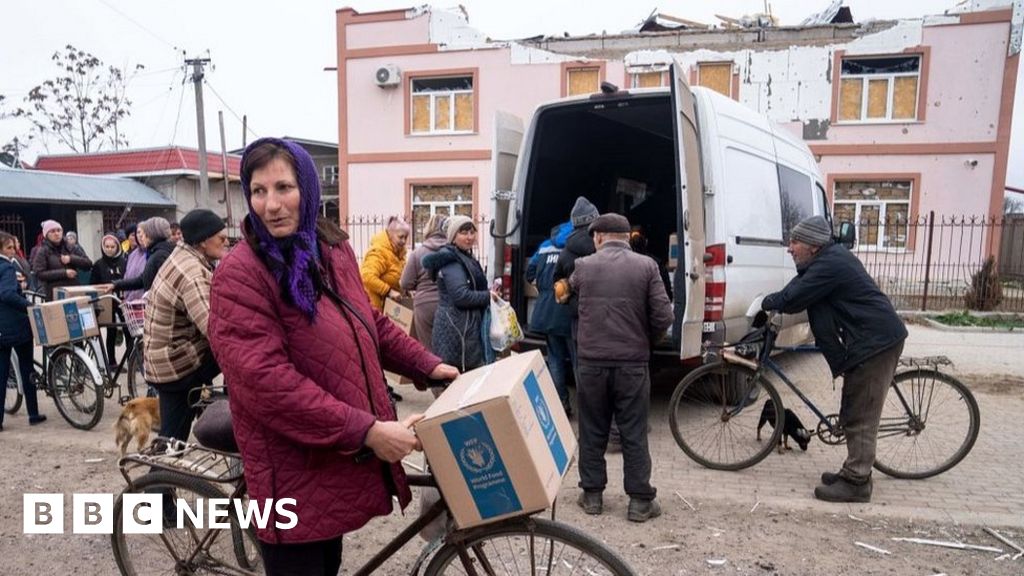 After scenes of joy in newly liberated Kherson the Ukrainian authorities have imposed a curfew and restricted travel in and out of the city, as the security situation remains tense.

There are fears that Russian troops, now digging in on the opposite bank of the Dnipro river, may resume shelling.

Kherson officials have banned use of river transport from 13 to 19 November.

Locals who fled have been warned not to return until their homes have been checked for mines or booby traps.

He has told citizens to avoid crowded places and stay away from the city centre on Monday because the military will be de-mining there.

There are also fears that some Russian soldiers may have remained behind in disguise, while collaborators who helped the Russians during the occupation are now liable to be prosecuted.

In a reminder of the continuing threat, a volley of artillery fire hit the area of Kherson airport on Sunday.

President Volodymyr Zelensky said the Russians had destroyed all critical infrastructure in Kherson, depriving the city of heat, electricity, water and communications.

Governor Yanushevych has announced a distribution of firewood to residents of Kherson and nearby areas, instructing them to request it with their ID and contact details. The city council also plans to hand out 6,000 small stoves to local residents.

“Most houses have no electricity, no water and problems with gas supplies,” said Yuriy Sobolevskiy, a senior council official.

Kherson’s liberation on Friday was marked by crowds of flag-waving Ukrainians greeting Kyiv’s soldiers with hugs and kisses. The celebrations continued on Saturday.

Ukrainians see it as a major national victory and humiliation for the Kremlin, on a par with the Russian withdrawal from the Kyiv suburbs in March.

Ukrainian officials say there was widespread looting by the Russian army. The level of theft has triggered mockery by Ukrainians since a video clip surfaced showing a Russian soldier picking up a raccoon by its tail and throwing it into a cage inside an enclosure – reportedly in Kherson zoo.

The raccoon meme has gone viral on social media, with Ukrainians turning the raccoon – allegedly a prisoner of the Russians – into a war hero.

Ukrainians joked about a message on Telegram by a Russian blogger, Anna Dolgareva, which said: “I was begged to provide some good news about Kherson, but really the only good news is that my friend managed to steal a raccoon from Kherson zoo.”

According to Oleksandr Todorchuk, founder of the animal welfare charity UAnimals, “the raccoon from Kherson zoo was stolen not just by some stupid soldier, but by the Russian command”. In a Facebook post, he said: “They took most of the zoo’s collection to Crimea: from llamas and wolves to donkeys and squirrels.”

Kherson was the only regional capital to be captured by Russia since the February invasion of Ukraine.

The region, along with three others, was proclaimed by President Vladimir Putin to be part of Russia, at a ceremony in the Kremlin in September.

Among the Russian forces fighting in Ukraine is the mercenary group Wagner, whose founder Yevgeny Prigozhin praised the brutal killing of a so-called “traitor”, shown being attacked with a sledgehammer in a video which went viral on Sunday. It has not been independently verified.

The victim identified himself as Yevgeny Nuzhin and the video – titled “the Hammer of Revenge” – was released on a Telegram channel called Grey Zone, reportedly linked to Wagner.

Seconds before the hammer blows, Nuzhin appeared with his head taped to a brick and said he had deserted to the Ukrainian side “to fight the Russians”, but had been kidnapped in Kyiv on 11 November.

In an earlier YouTube video, Nuzhin described to Ukrainian journalist Yuriy Butusov how Wagner had recruited him in a Russian prison, along with other inmates.

Commenting on the video, Mr Prigozhin called it “a dog’s death for a dog” and said Nuzhin was a “traitor” who “didn’t surrender, but planned his own escape”.