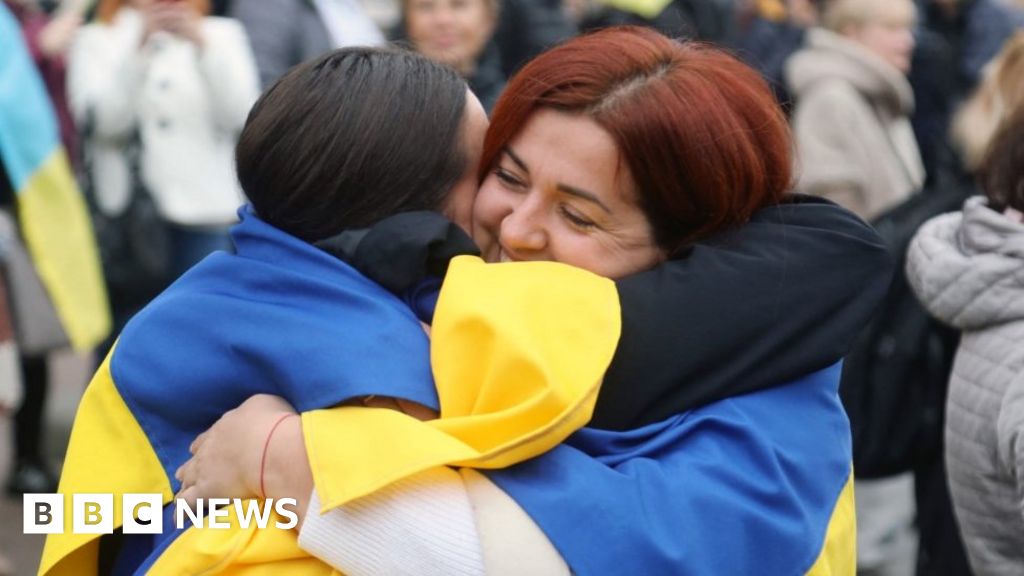 Ukrainian officials have warned “the war is not over” after Russia’s withdrawal from Kherson, even as celebrations continue over the weekend.

Cheering crowds welcomed Ukrainian troops to the city – the only regional capital taken by Moscow since February – on Friday.

Similarly jubilant scenes were reported in other regions across Ukraine, including the capital, Kyiv, and Odesa.

But despite the blow to Moscow’s ambitions, officials remain cautious.

Yuriy Sak, an adviser to the Ukrainian defence minister, warned the BBC it was “too early to relax”.

“But of course, this is a very important moment, but… this war is far from over.”

Kherson lacks running water, medicines and food, but emergency supplies are starting to arrive from nearby Mykolaiv, an aide to the city’s mayor says.

It is not yet clear when electricity will be restored to the city – nearby areas are expected to get it back in a few days’ time. The power cuts prevented Kherson’s bakeries from making bread.

Mr Sak warned of the continuing risk of missile attacks – as did Oleksiy Kuleba, head of the Kyiv region’s military administration. Russia has been firing missiles at Ukraine’s energy infrastructure in recent weeks, severely damaging the country’s output.

Mr Kuleba told the BBC: “Over the past month… we have seen massive shelling of peaceful settlements in Ukraine. Now I want to say that the threat of rocket attacks on the Kyiv region remains high.”

Meanwhile, the former head of Ukraine’s National Security Council, Oleksandr Danylyuk, has warned that the Russian troops who have retreated from Kherson will have crossed the Dnipro river to “go into deep defence on the left bank”, telling the BBC “it will put them [at an] advantageous position”.

Moscow said some 30,000 personnel had been taken out of the area – as well as around 5,000 pieces of military hardware, weaponry and other assets.

As BBC international editor Jeremy Bowen points out, the decision to pull out “has preserved the lives of soldiers who might have died fighting a battle they could not win” and allowed them to be deployed elsewhere in the country.

The UK’s Ministry of Defence noted on Saturday that it was “highly likely” Russian troops destroyed road and rail bridges over the Dnipro river as part of their retreat. Images emerged on Friday of the main river crossing – the Antonivsky Bridge – having partially collapsed. It remains unclear how the damage was caused.

On Saturday morning, other images emerged showing damage to the Nova Kakhovka dam, some 58km (36 miles) north-east of Kherson city.

US satellite imagery firm Maxar tweeted that “sections of the dam and sluice gates” had been destroyed. A road and railway line both run across the dam and Maxar’s photos show that they have been severed. It is not clear what caused the damage, which the BBC has not independently assessed.

New video footage, verified by the BBC, shows a huge explosion at one end of the dam.

Ukraine and Russia have accused each other of planning to breach the dam with explosives, raising the threat of flooding in the Kherson region.

The withdrawal – which the UK’s Ministry of Defence suggests could have started as early as 22 October under the cover of the civilian evacuation – means Russia has lost the administrative capital of one of the four regions it illegally annexed in September.

On Saturday, Moscow announced its temporary replacement capital would be a port city called Henichesk, more than 200km (125 miles) south-east of Kherson, near Russian-occupied Crimea.

Russia’s Interfax news agency says the authorities evacuated all the regional offices, as well as “statues and historic artefacts”, from the west bank of the Dnipro river – that is, from Kherson city and its surroundings. More than 115,000 people were evacuated from that area, it reports.

“In February, Russia failed to take any of its major objectives except Kherson,” he said in a statement.

“Now with that also being surrendered, ordinary people of Russia must surely ask themselves: ‘What was it all for?'”