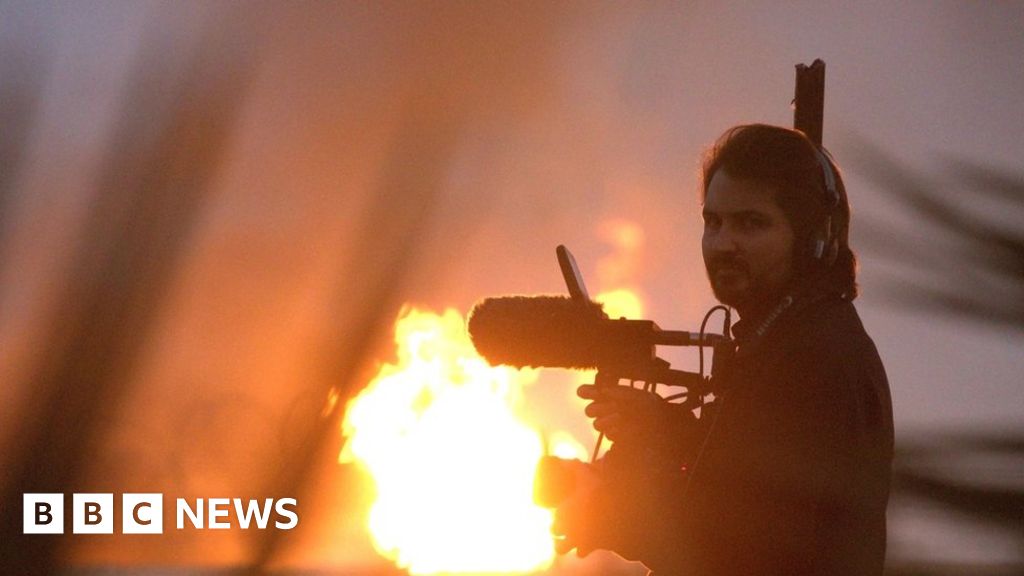 Far removed from the world leaders making climate pledges at COP, are people like Ali Hussein Julood, a young leukaemia survivor living on an Iraqi oil field co-managed by BP. When the BBC discovered BP was not declaring the field’s gas flaring, Ali helped us to reveal the truth about the poisonous air the local community has to breathe.

I first saw videos shared on Twitter of burning skies and clouds of black smoke over people’s houses in Iraq’s oil fields in 2019, and learned that this was a common procedure known as gas flaring – burning off the toxic excess gas that is a by-product of oil drilling.

We discovered through satellite data that Rumaila in Basra, southern Iraq, is the world’s worst offender for gas flaring. Gas flaring is not only a significant source of greenhouse gas emissions, it is also known to emit benzene – which heightens the risk of cancer, particularly childhood leukaemia.

Dozens of people we spoke to living in five different communities near oil fields like Rumaila, told the same story – that they had a close relative or a friend who was suffering from cancer, often leukaemia.

One of those was Ali, then 18 years old, whose father had sold everything in his house to raise money for his son’s cancer treatment in Turkey. Ali said that the cancer hospital in Basra was full of people like him who lived near oil fields. Rumaila, home to several thousand people, has been given the nickname “the shadow town” by locals, because it is cut off and lacking in basic services. Ali and his friends call it “the cemetery”.

“We’d be playing football, then we’d have to run inside, because of the clouds of smoke suffocating us and oil raining from the sky,” Ali told us.

“When I told the doctor [in Basra Children’s Cancer Hospital] I lived in this area he said: ‘This is the main reason for your illness.'”

But there had been no studies published on cancer rates in these communities. We later found out that data on this subject was being actively suppressed by the Iraqi government – a Basra health department document leaked to us revealed cancer rates were three times higher in Basra than official records claimed.

People living and working in Rumaila sent us videos which gave us a glimpse of what life was like there, but we were struggling to be allowed in to film for ourselves. Our official requests were turned down on at least five occasions, and the oil field – which at 1,800 sq km is bigger than some small countries – is guarded by several checkpoints. Beyond those checkpoints, the area is patrolled by the Iraqi oil police and private security firms working for the oil companies. And behind all of this are the armed militia groups that dominate Iraqi politics in the south – and are profiting from the oil operations on their doorstep.

So the only option remaining for us was to go into Rumaila undercover.

The deadly impact of the oil giants’ toxic air pollution on children and the planet is revealed in this BBC News Arabic investigation from the front line of climate change in Iraq.

The documentary is available to watch now on BBC iPlayer (UK only) and internationally on the BBC website.

We wanted to film an experiment to monitor the pollution ourselves, which we had devised with leading global pollution experts. We practised before we went on the roof of BBC Broadcasting House in London. The experts had advised us to use what are known as diffusion tubes – small brass cylinders with a filter inside that absorbs pollutants.

We worked with one of the region’s only environmental scientists, Prof Shukri Al-Hassan, to carry out tests over a two-week period in communities neighbouring four different oil fields within 10km of the gas flaring, including Rumaila. We also took urine samples from children to see if there were detectable toxins linked to gas flaring exposure.

Our test results indicated that all the 52 children we tested had high levels in their urine of metabolised naphthalene, a possible carcinogen. Our air pollution monitoring also found benzene levels to be three times higher than the national limit – and in all places it was much higher than the safe level, which the World Health Organization (WHO) says is zero.

What is gas flaring?

After the BBC’s film was released, Iraq’s Oil Minister Ihsan Abdul Jabbar Ismail, pledged that all flaring from the Rumaila oil field would be eliminated by 2026. But he made the statement on his last day in office, and previous targets to eliminate flaring have been repeatedly missed.

It is not clear with whom the accountability lies for phasing out flaring. The Iraqi government owns the oil field but BP manages it alongside their partner companies. The then oil minister Mr Abdul Jabbar Ismail told the BBC it was therefore BP’s responsibility to reduce flaring. BP, however, says the obligation lies with the operator of the oil field – the Rumaila Operating Organisation [Roo] – which BP co-founded and in which it owns a 48% stake.

And a number of whistleblowers from BP have approached us to tell us how bad they claim the situation is on the ground.

One BP Rumaila ex-employee, Robert (not his real name), told us: “As the lead contractor, BP’s obligation [to the Iraqi government] was to implement best international practices in the operation and maintenance of Rumaila.” But, he went on to say, gas flaring “is just the start” of what he describes as “appalling practices in Rumaila that would not be acceptable in any of BP’s operations nor uphold the international standard that BP is contracted to implement”.

He said that the failure to maintain and upgrade systems and infrastructure at the field caused systemic issues, leading to “frequent oil spills, unplanned flaring and gas leaks”. This claim has been made by other BP employees too, and the BBC has seen video evidence of major oil leaks at Rumaila oil field.

Two other former BP employees have told us there is insufficient pollution monitoring carried out on site, making them feel worried about their safety.

A spokesperson for BP said it “would like to strongly refute the claims you raise with regards to operational safety at Rumaila. Since BP began working in Iraq along with our partners, significant improvements have been made. Following years of conflict and underinvestment, there is more to do; and we are fully committed to supporting further improvements at Rumaila, as a matter of urgency.”

As for Ali, he is in remission from his leukaemia, but his immune system is still weak – his education was cut short and he can no longer play sport, having previously represented his school in regional football competitions. Many of the other children suffering from cancer who we met have since died – including 13-year-olds Fatima and Mustafa who lived near other oil fields in the area, and five-year-old Benin who lived in Rumaila, and who had already lost her older brother to the disease.

Ali has repeatedly approached BP for compensation to pay for his missed education. He says an employee from Roo – its Rumaila operator – visited him a day after the BBC investigation was broadcast, and Ali again asked for compensation.

“I told him how sick I got from the pollution and asked if BP could compensate me for the damage done to my health. But I have not heard from them since.”

BP said it was not appropriate to comment on private conversations between Rumaila staff and individuals, but added that immediately after first being contacted by the BBC, “BP started working with the Rumaila partners to look at the issues raised and, where necessary, how to address them. This includes a review of processes and procedures to support the community and understand any concerns – this is ongoing.”

Ahead of our initial investigation, BP told us that “in line with standard practice” it reports flaring emissions from activities only where it is the operator – “[Rumaila’s] flaring and operational data are therefore not included in our reporting.”

Insiders we spoke to estimated that improvements to reduce the flaring at Rumaila would cost in the range of $3-$5m (£2.6m-£4.4m) – a fraction of the £7bn ($8bn) quarterly record profit BP announced last week.