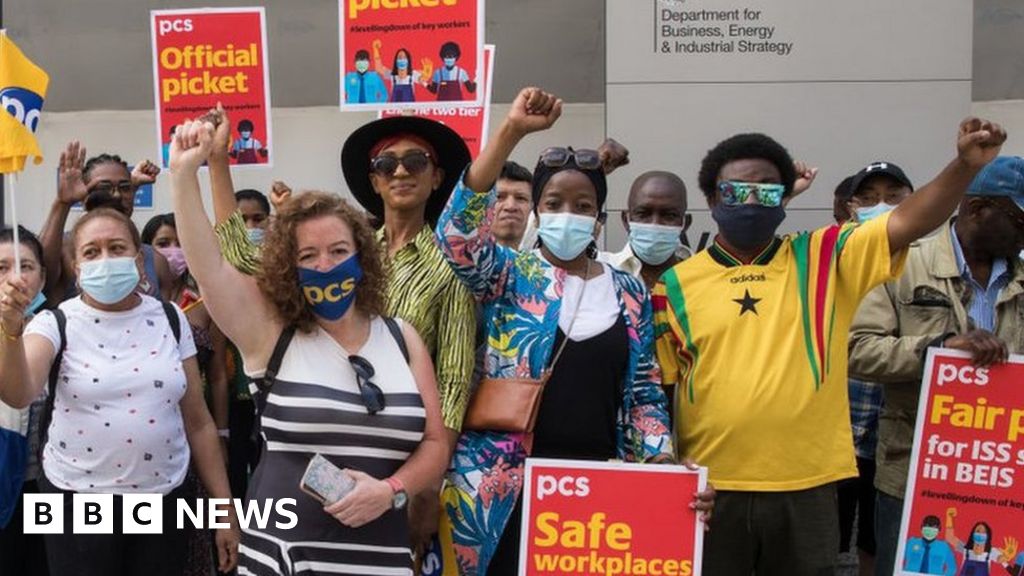 Around 100,000 civil servants have voted to strike over pay and conditions, the Public and Commercial Services Union has announced.

The threshold for strike action was met in 126 areas, from border force officials to driving test examiners.

The PCS is calling for a 10% pay rise, better pensions, job security and no cuts to redundancy terms.

Details will be announced on 18 November if there are no “substantial” government proposals, the PCS said.

In a statement, PCS General Secretary Mark Serwotka said: “Our members have spoken and if the government fails to listen to them, we’ll have no option than to launch a prolonged programme of industrial action reaching into every corner of public life.”

The civil service helps develop and implement government policy, as well as providing services to people across the UK, including running prisons, employment services and paying benefits and pensions.

Mr Serwotka said that the pressure of the cost-of-living crisis, job cuts and office closures had meant workers had “reached the end of their tethers”.

The government said it regretted the decision and remained in “regular discussion with unions and staff”, adding that plans were in place to minimise potential disruption if strikes go ahead.

“The public sector pay awards are a careful balance between delivering value for money for the taxpayer and recognising the importance of public sector workers,” a spokesperson said.

The PCS, which represents workers employed by several British government departments, said an average of 86.2% of its balloted members voted for industrial action – the highest percentage vote in the union’s history.

It comes after government announced plans to reduces civil servant jobs by 91,000 and proposals to cut redundancy pay by an estimated 25.9%.

A string of unions have voted for industrial action in recent months, bringing disruption to industries including transport and the legal profession.

The Associated Society of Locomotive Engineers and Firemen (ASLEF) union also announced on Thursday that train drivers working for 12 British operators will go on strike on 26 November in an ongoing dispute over pay.

Teachers in Scotland have also voted to strike, the country’s largest teaching union announced on Thursday.

It follows an announcement by the Royal College of Nursing, on Wednesday, that nurses have voted to walk out over pay, marking the first time UK-wide strike action has been taken by RCN members in its 106-year history.

Labour leader Sir Keir Starmer said he didn’t want to see industrial action but understands “why people are going down that route”.

Speaking to BBC Look North’s Peter Levy, Sir Keir claimed a Labour government would “resolve” issues over pay and staffing in the NHS, promising “the cavalry is coming”.