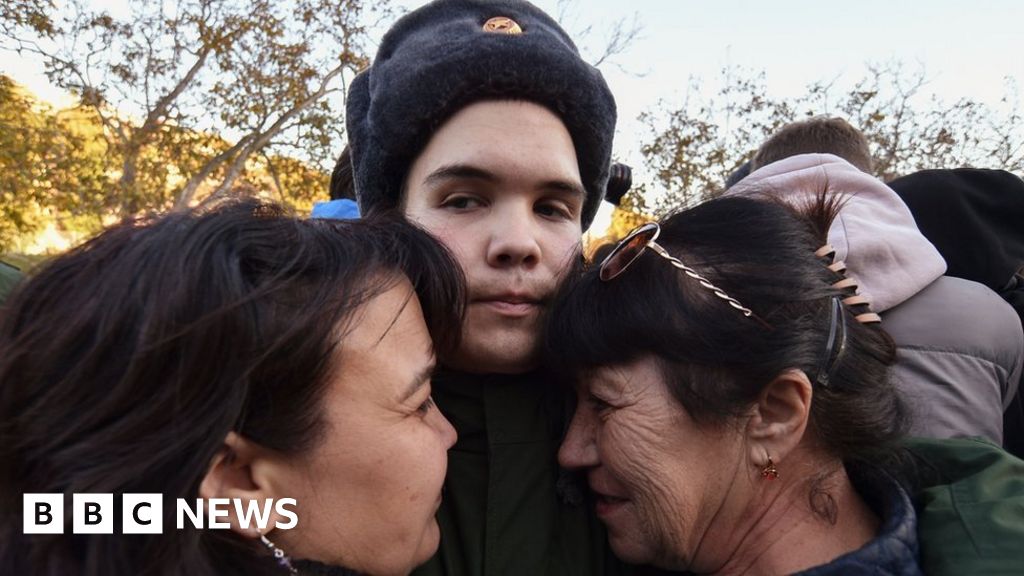 US President Joe Biden has said Russia’s decision to withdraw from the Ukrainian city of Kherson shows its military has “some real problems”.

Mr Biden said he had been expecting the move for “some time” and that it would allow both sides to “recalibrate their positions” over the winter.

Kherson is the only major Ukrainian city to fall to Russian forces.

But earlier on Wednesday, Russia’s commander in Ukraine said it was no longer possible to supply the city.

Gen Sergei Surovikin, who was given command just weeks ago, made the announcement accompanied by the military top brass on Russian state TV. He confirmed Russian troops would withdraw entirely from the western bank of the River Dnipro.

It is a significant blow to Russia’s military ambitions as it faces a Ukrainian counter-offensive.

Mr Biden was speaking from the White House after midterm elections in which his Democratic Party looked likely to lose control of the House of Representatives to the opposition Republican Party.

The president’s political rivals previously vowed to review US military and humanitarian aid to Ukraine, and Mr Biden observed that it was “interesting” that Moscow had “waited until after the election” to announce the withdrawal.

But he said he hoped the “bipartisan approach of confronting Russia’s aggression in Ukraine” would continue.

The decision to pull back across the Dnipro was treated with caution by Ukraine.

“The enemy does not give us gifts, does not make ‘goodwill gestures’, we win it all,” he told Ukrainians in his nightly address.

After Russia’s announcement, civilians inside Kherson said Chechen troops from the Russian military were in the city, in cafes, and moving around the streets.

And at a Ukrainian position on the perimeter around the city, soldiers said the enemy might be trying to draw them into a trap and were proceeding cautiously.

A city about to change hands?

Since October, some Kherson residents loyal to Kyiv have felt change in the air.

With Russian-appointed officials starting to evacuate civilians, the city’s liberation seemed to be getting closer.

One of the most symbolic – and perhaps telling – moments came when a Russian team arrived at the city’s 18th Century Cathedral of St Catherine to remove the bones of Prince Grigory Potemkin, the man responsible for colonising southern Ukraine on behalf of his lover, Catherine the Great.

But there has been a mounting sense of dread too. If Russian forces were compelled to withdraw, what would they do as they left?

Rumours are rife: that Russia is planning to blow up the nearby Nova Kakhovka dam; that Russian troops have donned civilian clothing and are hiding in private homes; or that Russian artillery will simply try to level the city from across the Dnipro, after troops finally leave.

Whatever happens, this feels like a critical moment. A city seen as a jewel in the crown of Russia’s occupation may be about to change hands.

President Vladimir Putin did not take part in the announcement of the withdrawal.

But two of his major allies – previously critical of Russia’s war effort – welcomed the move.

Yevgeny Prigozhin, founder of the Wagner mercenary group and a long-time Putin associate, said that while the decision was “not a victorious step” it was important “not to agonise, not to get paranoidal, but to draw conclusions and work on mistakes”.

Chechen leader Ramzan Kadyrov – who Mr Putin picked to rule the autonomous republic in 2007 – said Gen Surovikin had acted “like a real military general, not afraid of criticism”.

Although the Ukrainian advance had slowed in recent weeks, Russia’s supply lines across the Dnipro had become increasingly difficult after the few bridges across were destroyed by Ukrainian missiles.

Before the withdrawal, Russia moved thousands of civilians out of the city by boat, in what Ukraine described as a deportation.