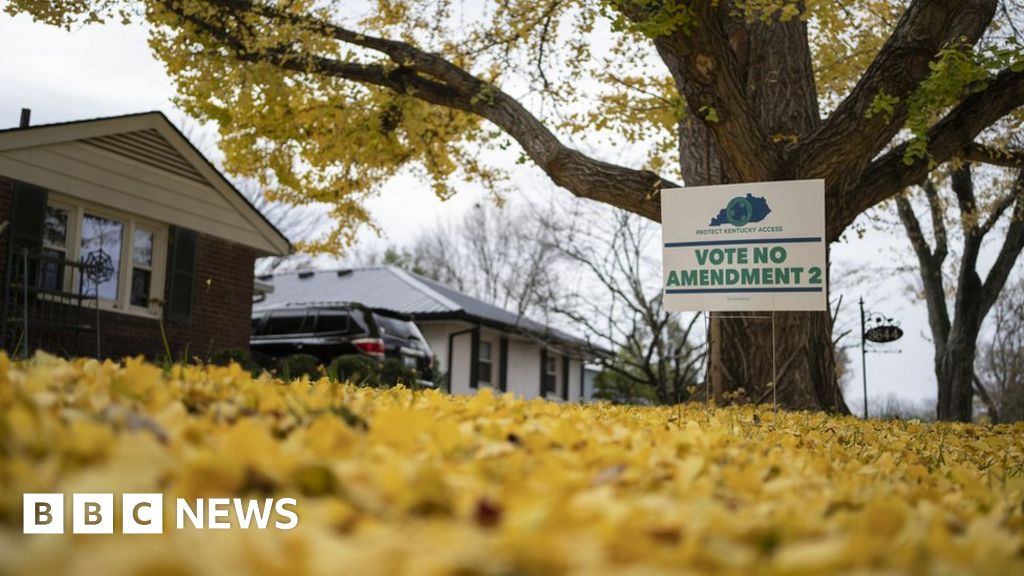 The high-stakes battle over abortion in the US is unfolding in Kentucky, where voters will decide whether the state constitution should remove all protection for abortion rights. The vote, like measures in Michigan, California, Montana and Vermont, will signal Americans’ attitudes toward abortion after the country’s Supreme Court overturned Roe v Wade rights.

Three days before the midterm elections, Deann Allen is among pro-choice volunteers gathering in a public library in Louisville, Kentucky’s largest city, for a day of canvassing.

Wearing glasses and a tentative smile, Ms Allen hung towards the back. “It’s my first time canvassing,” she said, in a lilting southern accent. “I have two progressive daughters,” she added, by way of explanation.

For most of her life, Ms Allen, 62, was not a progressive. She grew up in the state’s southeast Clay County, one of the poorest communities in the nation. From her family home she could see the family graveyard – generations of Republicans.

“That was the joke growing up,” said her daughter, Carolyn Allen, 31. “Our grandparents would roll over in their graves if you were anything less than Republican.”

But like Carolyn, Ms Allen is now a Democrat herself. In June, on the day that the US Supreme Court overturned Roe v Wade – ending the nationwide guarantee to abortion access – she sat down and cried.

“I remember the sixties and the seventies, the horror stories of the coat hangers and the illegal abortions. And so I left the Republican party.” Then she paused. “No, they left me.”

On Tuesday, voters in Kentucky will decide whether the constitution should be altered to say explicitly there is no protection for abortion rights. The ballot measure – a single sentence called Amendment 2 – is nearly identical to the one roundly rejected in Kansas three months ago.

Kentucky, a conservative state in the country’s south, is already enforcing a near-total ban on the procedure, except for life-saving reasons. The state’s two abortion clinics have – at least temporarily – closed their doors.

With the exception of Governor Andy Beshear, a Democrat, the state is run mainly by committed anti-abortion Republicans, including Attorney General Daniel Cameron. Mr Cameron, who campaigned in part on protecting the “unborn”, has vigorously defended the state’s abortion ban.

“I come from a big Catholic family – that plays a big role in why I am pro-life,” said Helene Senn, 20, who works with Louisville Right to Life. “Human life begins at conception, and I firmly believe that.”

If the amendment is passed, it will contribute towards ensuring abortion remains illegal state-wide. If the vote rejects it, that could open the door for legal challenges to abortion bans.

The vote here will be a crucial test of Americans’ support for abortion access, like the Kansas vote before it. Democrats hope abortion rights can be a winning issue even in the country’s conservative half.

“Abortion is now a major election issue in ways we haven’t seen in decades, if ever,” said Elizabeth Nash, a policy analyst with the Guttmacher Institute, a pro-choice research group. “And we’re going to learn a lot out of Kentucky.”

There has been no public polling on the vote to offer a clue to Tuesday’s returns. But pro-choice campaigners seemed to have momentum on their side – buoyed by the Kansas victory and a multi-million dollar fundraising advantage.

Even on streets peppered with signs supporting Republican candidates, voters stood in their doorways and listened, over the sounds of barking dogs and gusting winds, as advocates with Protect Kentucky Access (PKA) gave their spiel in favour of abortion rights.

“Back in the day, women died having abortions. I would hate to think that now, in 2022, we would have women dying in back alley abortions,” said Becca Brown on Saturday, standing outside of her Louisville home after opening the door to a PKA volunteer. “Why would we go backwards?”

Kentucky’s maternal mortality rate is one of the worst in the country and many raised that as a concern. Some physicians and patients say the bans have impeded the care of pregnant women experiencing complications.

One young woman, who was 13 weeks pregnant, told the BBC she and her partner had made tentative plans to travel to Chicago for care after test results showed there was a “95% chance something was extremely wrong with our baby”.

“I just saw the light leave my husband’s eyes,” she said of the news. “But the next question is: where are we going to go?” She asked not to be named for privacy.

But there were also houses – at least a few on every block – with proud “Yes on Amendment 2” posters. Here, pro-choice volunteers would gingerly back away, skipping those doors altogether.

One woman, Debra, told pro-choice volunteers at her home on Saturday that the idea of abortion broke her heart. Health complications in her early twenties had left her unable to have children, she said. And it made her resent other women who got pregnant, only to “throw that baby away”.

Marina Mason, 27, a Louisville native and regional coordinator for anti-abortion group Students for Life of America (SFLA), said the amendment was a simple step to keep abortion bans in place, without interference from the state Supreme Court.

The majority of Americans (61%) believe abortion should be legal in all or most cases. But sitting in the offices of Louisville Right to Life on Sunday evening, Ms Mason articulated the position of millions of Americans: abortion is equivalent to murder.

“It’s a straightforward matter of right and wrong,” she said. “I care about justice, and I care about people who are weaker, more innocent.”

“We know we’re on the right side of history,” said Helen Senn. “We’re here to save lives.”

Just how broadly that perspective is shared will be measured on Tuesday.

“This is a real test for them [anti-abortion campaigners] too,” said Guttmacher’s Ms Nash. “And they are pulling out all the stops.”