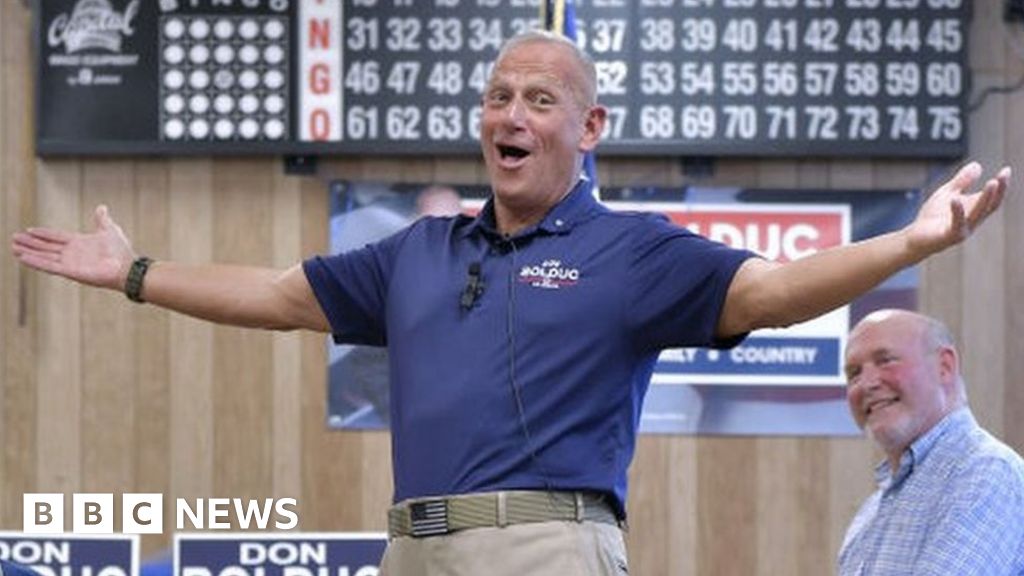 With a razor-thin majority to protect in the Senate, Democrats will be looking to hold seats like New Hampshire in the midterm elections. So why did they boost the candidacy of the Republican challenger there?

When Don Bolduc won the Republican primary in New Hampshire to become the party’s candidate for the US Senate, Democrats were relieved.

Democratic Senator Maggie Hassan was facing a tough fight for re-election and most people (including many Republicans) thought she’d easily win against Bolduc – a retired one-star general with a history of denying the results of the 2020 election.

Most recently he suggested that children at a New Hampshire school were being allowed to behave like cats and use litter trays. The bizarre hoax has been echoed by other Republican candidates in their states, part of a conservative response to the debate over gender identity in schools.

In fact, the Democratic party was so convinced Bolduc couldn’t beat Hassan, it paid for ads attacking a more moderate Republican candidate in order to help Bolduc win the primary.

But with just two days to go before the election, Hassan has lost her initial double-digit lead and the race is virtually tied. There is a real possibility that Bolduc could win in New Hampshire and help Republicans take back control of the Senate.

“We played with fire and we’re going to end up with some real loony tunes in Washington because we thought we could pull this off and it was a dreadful mistake,” says Democratic media consultant and strategist, Dane Strother of Strother-Nuckels Strategy.

“It’s very difficult to choose your opponent and far more often than not when you try to do that it fails.”

Anita Burroughs, a New Hampshire state representative who is also running for re-election, says: “I thought that financing any Republican candidate was a risky move and we may see this as a prime example of why not to do it. We may live to see the ill effects of this strategy.”

“I think they increased his name recognition among Republicans and gave him a more positive view that helped propel him… to potentially beat Senator Hassan.”

At the start of his campaign, some big Republican donors also believed Bolduc had little chance of beating Hassan and withdrew funding. New Hampshire’s Republican Governor, Chris Sununu dismissed him as “not a serious candidate”.

“That actually helped, in my view,” says Ager. “It showed he’s not reliant on the big Washington money. He’s listening to us.”

New Hampshire has a reputation for political independence and voters often split their ballots – voting for candidates from different parties in the same election. Joe Biden carried the state for the Democrats in the 2020 presidential election – but voters also returned Governor Sununu to office and the state government is controlled by Republicans.

Bolduc is now backed by both the Republican National Senatorial Campaign Committee and Governor Sununu. He was endorsed by President Trump last week.

“General Don Bolduc has run a great campaign to be the US senator from the beautiful state of New Hampshire. He was a strong and proud ‘Election Denier,’ a big reason that he won the nomination, but he then disavowed,” wrote Trump on his Truth Social platform.

“Nevertheless, Don Bolduc has asked for my endorsement, and he’s got it, Complete & total.”

But Ager thinks such late support has had little impact. “The president did not endorse him in the primary and so General Bolduc is not beholden to anyone. He hasn’t relied on any of them to get where he is. I think that’s what the people of New Hampshire are looking for.”

He said Bolduc was raising parent concerns when he claimed school children were identifying as cats. “He’s not afraid to bring up issues that people put on the table. And if it turns out that person was incorrect… you can walk it back if you need to.” The school has denied the allegation.

Both Senator Hassan and Don Bolduc have described each other’s views as extreme – particularly on abortion. She says he backs a national ban while he claims she supports abortion with no limits.

Hassan has also been criticised by some in her own party of being largely absent from the campaign trail while Bolduc has conducted countless town hall meetings and events in order to boost his profile.

He has also benefitted from the intensification of America’s partisan politics and Democrats’ low approval ratings nationally. Inflation, crime, energy and gas prices are the top concerns of voters.

“Every time you drive by a gas station and see a sign with the price per gallon – that’s a Republican billboard,” says the Democratic strategist Dane Strother. “And we drive by them daily.”

Ed Kelly is a Republican in New Hampshire’s Carroll County. He didn’t vote for Bolduc in the primary but plans to vote for him on Tuesday.

“Like so many things in politics you have to ask, what’s the best choice and what’s the choice you have? Is Bolduc my preferred candidate? No. But if you compare him to Hassan, it’s an easy choice,” he says.

“The country is a mess and the stupidity of the (Biden) administration has caught up with her. She went to Washington and became part of the establishment. Bolduc has done a better job of campaigning, he has momentum and he works hard.”