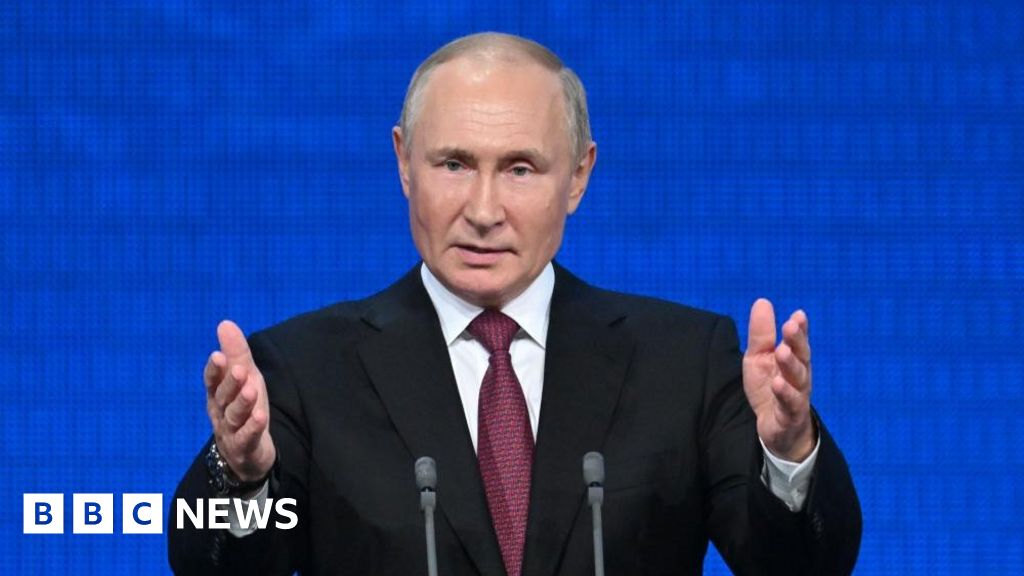 Western nations have condemned Moscow’s plans to hold urgent so-called referendums in parts of Ukraine that are currently under Russian control.

The votes have been called by Russian-backed officials in four Ukrainian regions to ask whether they should become part of Russia.

The US, Germany and France have said they would never recognise the results of such “sham” ballots.

The Nato military alliance said the plans spelt an escalation in the war.

Plans to run polls for five days, starting on Friday, have been announced in the eastern regions of Luhansk and Donetsk – as well as Zaporizhzhia and Kherson in the south.

The quartet represent around 15% of Ukrainian territory – or an area the size of Hungary, according to Reuters news agency.

The suggestion that legitimate and fair polls could be run in the middle of a war were immediately scorned by the West.

“If the Donbas referendum idea wasn’t so tragic it would be funny,” Mr Macron told reporters in New York, where he is attending the United Nations General Assembly.

He pleaded with neutral countries to change their stance to the war, saying silence or complicity was an “historic error”.

US National Security Advisor Jake Sullivan said the US would never recognise the votes, calling them “an affront to the principles of sovereignty and territorial integrity”.

Any referendum planned by invading forces contravenes international law and will have no legal force, the Organisation for Security and Cooperation in Europe (OSCE) said in a statement.

Sham referendums have no legitimacy & do not change the nature of #Russia’s war of aggression against #Ukraine. This is a further escalation in Putin’s war. The international community must condemn this blatant violation of international law & step up support for Ukraine. pic.twitter.com/NdcN3tO6Sy

Ukraine’s President Volodymyr Zelensky thanked his partners for their support in the face of Russia’s “noisy news”.

Mr Zelensky is expected to address the UN General Assembly by video-link later on Wednesday.

There were reports that Russia’s President Vladimir Putin would give his own, rare address on Tuesday evening – potentially discussing the planned votes, or a wider troop mobilisation in Ukraine. But no speech came, and speculation shifted to Wednesday.

The plans to hold votes within a matter of days is widely seen as a push by Mr Putin to accelerate Russia’s annexation of Ukraine.

It comes after a sweeping Ukrainian counter-offensive, in which Kyiv claims to have retaken 8,000 sq km (3,088 sq miles) this month, putting Russia on the back foot.

Cementing its control over Ukrainian land could enable Russia to make the claim that its territory – not just its army – was coming under attack from Western weapons as hostilities continue. This is because several western nations have been supplying Ukraine with weapons to help in its defence.

It is feared that this could lead to an intensification of the already-bloody conflict.

The head of the International Committee of the Red Cross has expressed fears the war could move into the long term.

Pro-Russian leaders in the four Ukrainian regions have supported the referendums.

The head of the Russian proxy administration in Luhansk, Leonid Pasechnik, said it was “our common dream and our common future”.

The deputy head of Russia’s Security Council, Dmitry Medvedev, said that the votes would restore “historical justice” and be irreversible.

Russian proxy administrations have operated in Donetsk and Luhansk since 2014. Both were controversially recognised as independent by Mr Putin three days before he launched his invasion on 24 February.

The subsequent onslaught saw Russia take full control of Luhansk for a time – although Ukraine has now reclaimed some territory.

The latest moves to call for “referendums” has echoes of Russia’s annexation of the southern peninsula of Crimea in 2014.

A vote was also called there in an attempt to legitimise Moscow’s rule, however that vote, too, was labelled illegal and condemned by the international community.