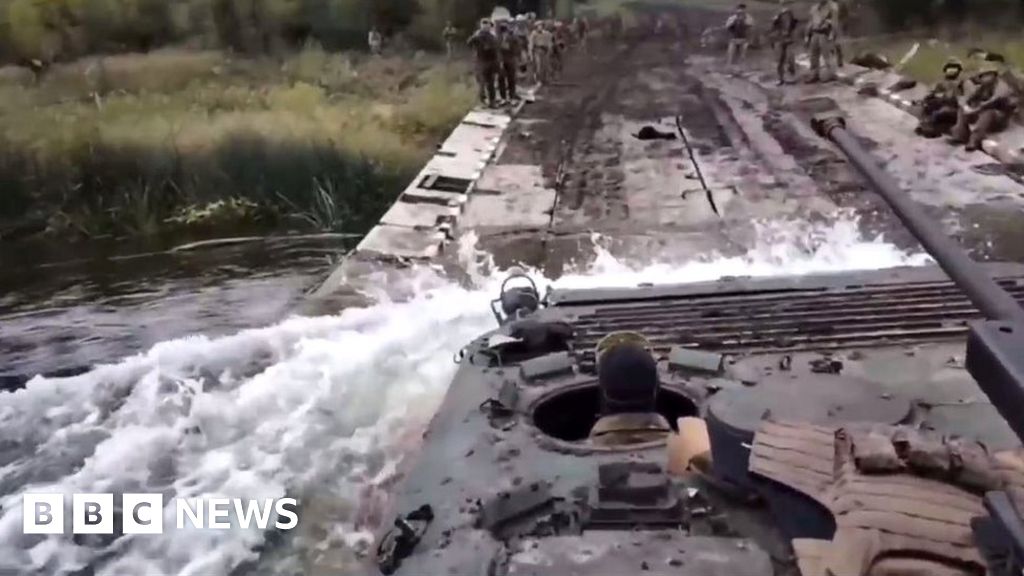 Ukrainian forces say they have regained control of the east bank of the River Oskil, seen as the front line with Russian troops in north-east Ukraine.

Russia’s army has been almost completely pushed out of the Kharkiv region and a regional leader said the next target would be neighbouring Luhansk.

President Volodymyr Zelensky said the next offensive was being prepared.

Meanwhile, Russia was accused of targeting a nuclear plant in the south.

Ukrainian nuclear operator Enerhoatom said a rocket landed 300m (1,000ft) from nuclear reactors at the the country’s second largest plant in Mykolayiv region, damaging buildings and shutting down part of a hydro-electric power station at the complex.

The attack has not been independently confirmed, although footage was posted online by the Ukrainian military.

Ukraine’s – and Europe’s – biggest nuclear plant at Zaporizhzhia has come under repeated fire since it was occupied by Russian forces at the start of the war and the UN has called for a safety zone to protect it.

Ukrainian forces have launched counter-offensives in the south as well as the north-east, but they have made dramatic progress this month in the northern Kharkiv region.

US President Joe Biden told US TV network CBS that Ukraine was paying a high price, but that Russia was “turning out not to be as competent and capable as many people thought they were going to be”.

The head of Luhansk region, Serhiy Haidai, shared video of a tank crossing a pontoon bridge, and said Ukraine now controlled the left bank of the Oskil river. “Luhansk region is right next door. De-occupation is not far away,” he claimed.

If Ukrainian forces are able to maintain a foothold on the eastern side of the Oskil, it will represent a breakthrough. Mr Haidai said the next target would be liberating the city of Lyman, which was seized by Russian forces in May.

Lyman lies to the south-east of Izyum, where Ukraine has uncovered some 450 bodies in hundreds of burial sites.

The discovery has prompted the European Union’s presidency, currently held by the Czech Republic, to call for an international tribunal into Russia’s invasion.

But Kremlin spokesman Dmitry Peskov said allegations of war crimes were “a lie, and of course we will defend the truth in this story”. He said the “scenario” was the same as in the town of Bucha near Kyiv, where local authorities say at least 458 civilians were murdered during Russia’s occupation.

President Vladimir Putin said on Friday that Ukrainian counter-offensives would not change Russia’s military plans in the east of Ukraine.

In his nightly address late on Sunday, President Zelensky said that recent days may have looked like a lull of sorts: “But there will be no lull. There is preparation for the next series… For Ukraine must be free. All of it.”

However, according to the UK’s defence intelligence update, it was “highly likely” that Russia had lost four combat jets in Ukraine in the past 10 days as its air force took greater risks to support ground forces under pressure from the Ukrainian advances.

The Institute for the Study of War says Russia is relying increasingly on “irregular volunteer and proxy forces” instead of its conventional military units.

Russia says it is fighting neo-Nazis in Ukraine – a claim widely dismissed – and that it is threatened by the Nato alliance’s strong relations with Ukraine.

Since the invasion on 24 February, the UN has recorded at least 5,718 civilian deaths, with 8,199 injured, and more than seven million Ukrainians have been recorded as refugees across Europe.

The actual civilian death toll is believed to be thousands higher. Tens of thousands of combatants have been killed or injured.

Russia, a global energy supplier, is locked in an economic struggle with the West which imposed sweeping sanctions in response to the invasion.