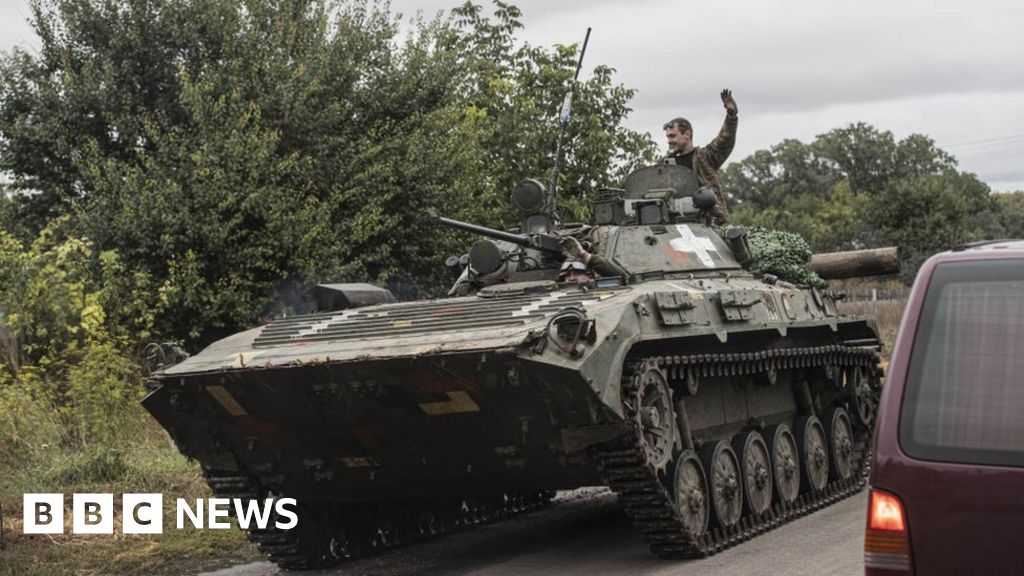 Ukrainian officials say they are targeting towns in the eastern Donbas region after making a series of gains in a rapid counter-offensive.

President Volodymyr Zelensky said his forces were fortifying their hold over 8,000 sq km (3,088 sq miles) of retaken territory in the Kharkiv region.

US President Joe Biden said Ukraine had made “significant” gains.

Mr Biden said it was “clear” that the advance had enjoyed success, but cautioned that the offensive “could be a long haul”.

While Russia still controls around a fifth of Ukraine’s territory, towns in the Donbas that fell early in the war are now under threat from Kyiv’s advancing forces.

After failing to capture cities across the country, including the capital Kyiv, Russia has been focusing on the Donbas, parts of which were already under the control of Russian-backed rebels before Russia launched its invasion this year.

Andrey Marochko, military commander of the self-declared Luhansk People’s Republic – one of two provinces that make up the Donbas – told Russian state media that fighting had reached the borders of the territory.

And Serhiy Hayday, the exiled Ukrainian head of the Luhansk region, said Ukrainian forces were engaging Russian troops on the outskirts of Lyman.

“There are fierce battles in Lyman now, which I think will last a few more days,” Mr Hayday said in a Telegram post.

Lyman fell to Russian forces after a protracted battle at the end of May. It sits less than 150 km (93 miles) away from the city of Donetsk, the capital of the self-declared Donetsk People’s Republic.

Its capture was a coup for Russian troops, giving Moscow control over a key east-west highway.

In other areas, Ukrainian forces are said to have reached the Russian border, and Mr Hayday said their capture of two towns – Izyum and Kupiansk – could see supply lines to the Russian-held cities of Severodonetsk and Lysychansk severed.

The precise scale of Ukraine’s gains has not been verified by the BBC, but on Wednesday Mr Zelensky visited Izyum, where he met Ukrainian troops taking part in the advance.

Locals in the town of Balakliya told the BBC that Russian troops had tortured civilians at the town’s police station during their occupation, and others recounted being electrocuted while in detention.

On Monday, Moscow insisted that it would press on with its invasion “until all the goals that were originally set are achieved”.

But the pace of the Ukrainian advance appears to have taken Russian forces by surprise, with reports of some of Moscow’s forces abandoning their uniforms to blend in with civilians.

In some areas, Russian teachers who moved to Ukrainian towns and cities after Moscow seized control were left behind by the retreating troops.

An unspecified number have now been detained by Ukrainian forces and Deputy Prime Minister Iryna Vereshchuk has warned that they will face charges.

A German government readout of the call said Mr Scholz urged Mr Putin “to find a diplomatic solution as soon as possible, based on a ceasefire, a complete withdrawal of Russian troops and respect for the territorial integrity and sovereignty of Ukraine”.