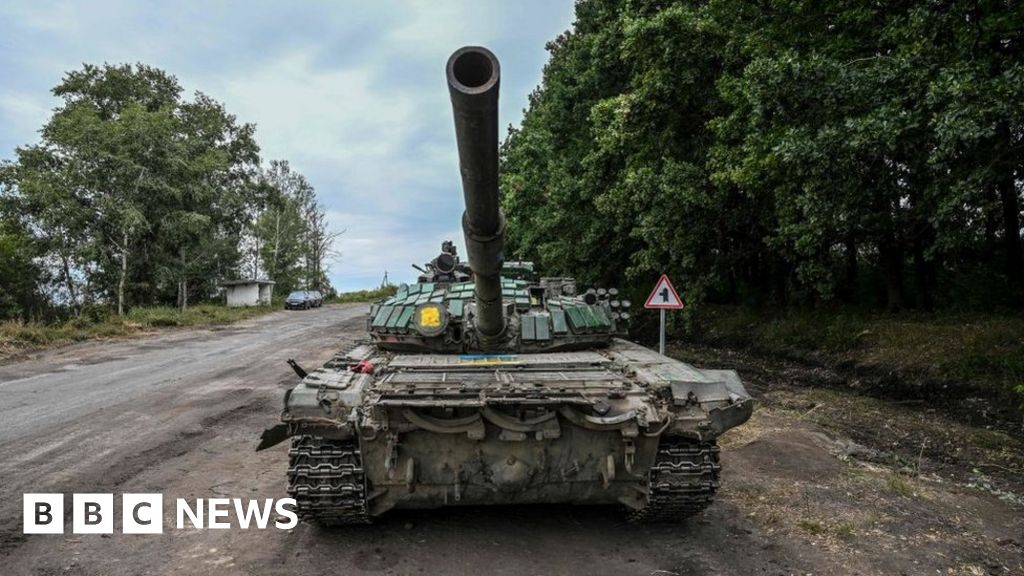 Ukraine’s military says its forces have retaken over 3,000 sq km (1,158 sq miles) during a rapid counter-offensive in eastern Ukraine.

The remarkable advance, if confirmed, means Kyiv’s forces have tripled their stated gains in little over 48 hours.

On Thursday evening, President Zelensky put the figure at 1,000 sq km, and then 2,000 sq km on Saturday evening.

The BBC cannot verify the Ukrainian figures, and journalists have been denied access to the frontlines.

But UK defence officials have warned that fighting has continued outside those towns. And officials in Kyiv said Ukrainian forces were still fighting to gain control of a number of settlements around Izyum.

Russia’s defence ministry confirmed its forces’ retreat from Izyum itself and Kupiansk, which it said would allow its forces “to regroup” in territory held by Moscow-backed separatists.

The Russian ministry also confirmed the withdrawal of troops from a third key town, Balaklyia, in order to “bolster efforts” on the Donetsk front. Ukrainian forces entered the town on Friday.

At the same time, the head of the Russia-installed administration in the Kharkiv region recommended that its people evacuate to Russia “to save lives”.

And the governor of the Belgorod border region in Russia said mobile catering, heating, and medical assistance would be available to people queuing.

The pace of the counter-attack has caught the Russians off guard, and Chechen leader Ramzan Kadyrov – a staunch supporter of President Vladimir Putin – appeared to question the Russian retreat.

In a message posted to Telegram, Mr Kadyrov said if there was not a change in Russian fortunes, he would be forced to question the country’s leadership to explain the situation.

But Russians still hold around a fifth of the country, and few imagine a swift end to the war. And Mr Kadyrov himself insisted “Russia will win” and “Nato weapons” would be “crushed”.

The Ukrainian advances – if held – would be the most significant frontline changes since Russia withdrew from areas around Kyiv in April.

Kupiansk served as Russia’s main eastern supply hub and the loss of Izyum – which Moscow spent over a month trying to take at the beginning of the war – would be seen as a major humiliation for President Vladimir Putin.

According to one military expert, the advance marks the first time since World War Two that whole Russian units have been lost.

The gains will also be seen as a sign that Ukraine’s army has the capacity to retake occupied territory – crucial as Kyiv continues to ask hard-pressed Western allies for military support.

On Saturday, UK defence officials suggested that much of the retaken area was only “lightly held”.

Ukraine launched its counter-offensive in the east earlier this week, while international attention was focused on an anticipated advance near the southern city of Kherson.

Analysts believe Russia redirected some of its most seasoned troops to defend the city.

But as well as gaining ground in the east, Ukraine is also making gains in the south, an official said.

Nataliya Gumenyuk, a spokesperson for the Ukrainian army’s southern command, said they had advanced “between two and several dozens of kilometres” along that front.

But Russian forces fighting on the southern front are said to have dug into defensive positions, and Ukraine’s troops have faced heavy resistance since the offensive began.

And in Kharkiv itself, one person was killed and several homes damaged on Saturday as Russian rocket fire hit the city, according to local officials.

Elsewhere, Ukraine’s energy regulator, Energoatom, says the last reactor at the Russian-occupied Zaporizhzhia nuclear power plant has been shut down, and is not generating electricity.

The reactor had been generating energy for the plant itself for three days – it was shut down when external power was restored.

The Ukrainian operator said that to prevent an emergency, it was essential that shelling of the power lines connecting the station to the national grid be halted.