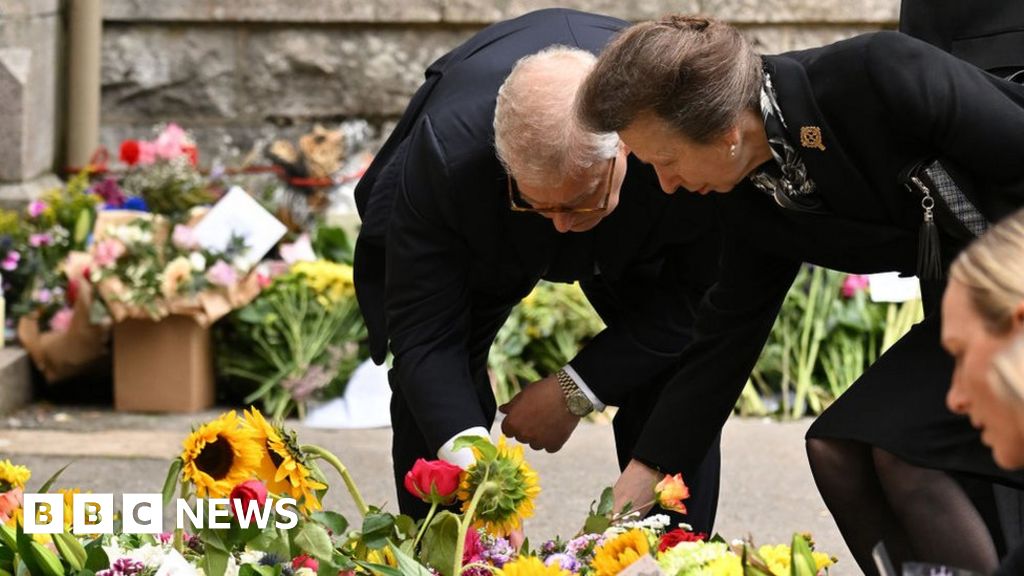 The Queen will lie in state for four days before her funeral at Westminster Abbey on Monday, 19 September.

The public will be allowed to view the coffin during that time.

Before this, the Queen will be at rest in St Giles Cathedral Edinburgh, for 24 hours from Monday 12 September, with people able to pay their respects.

Her family, politicians and world leaders will attend her state funeral at 11:00 BST. It will be a bank holiday.

The Queen’s final journey will begin on Sunday, with her oak coffin being carried by her Balmoral gamekeepers – her own staff bringing her to a hearse that will take her to Edinburgh.

It will drive slowly to the Palace of Holyroodhouse for 16:00 BST.

On Monday afternoon, it will process to St Giles’ Cathedral, Edinburgh, with members of the Royal Family. There will be a service and the coffin will rest here for 24 hours, for people to pay their respects.

The following day, Princess Anne will accompany her mother’s body as it is flown back to London. The Queen’s coffin will be taken from Edinburgh Airport to Buckingham Palace via RAF Northolt.

On Wednesday afternoon, it will be taken to Westminster Hall, arriving at 15:00 BST. Four clear days of lying in state will happen from Thursday, before the funeral.

Monday 19th’s state funeral will be followed by a procession from London to Windsor Castle. The Queen will be laid to rest at King George VI Memorial Chapel at Windsor.

Her journey, beginning in simplicity, will end with the sombre grandeur of the first state funeral that many people will have seen – the last being Sir Winston Churchill in 1965.

Ahead of the funeral the new King will visit Scotland, Northern Ireland and Wales. Prime Minister Liz Truss will accompany him.

A period of national mourning will last until the day of the state funeral, the government has announced. The Royal Family will observe a further period of mourning for seven days afterwards.

Westminster Abbey is the historic church where Britain’s kings and queens are crowned – but there has not been a monarch’s funeral service there since the 18th Century. Funerals for the Queen’s father, grandfather and great-grandmother, Queen Victoria, in the 1900s, were all held at St George’s Chapel, Windsor.

Heads of state from across the world will be invited to join members of the Royal Family to remember the life and service of the Queen.

Senior UK politicians and current and former prime ministers are also expected at the televised service.

There is no obligation for organisers to cancel planned events on the day of the funeral but government guidance suggests organisers of sporting fixtures or pre-planned events may wish to adjust timings to avoid clashing with the service or processions.

Some events in the immediate aftermath of the Queen’s death were cancelled or postponed.

Football matches in the Premier League, English Football League or in Scotland or Northern Ireland have been postponed until Tuesday, while all games in the Women’s Super League, Women’s Championship and Women’s FA Cup have also been put on hold. A number of horse racing, golf, and boxing fixtures have also been called off.

Large-scale strike actions planned for next week were immediately cancelled, and the Trades Union Congress said it was postponing its annual conference in Brighton.

The King confirmed earlier on Saturday that the day of the funeral would be a bank holiday, when he was proclaimed as monarch at St James’s Palace, London

In his speech, he praised the Queen’s “unequalled reign”.

The King became the monarch after the death of his mother, but the meeting of the privy council of politicians, officials and clergy formally confirmed it.

The packed room, including all of the six living former British prime ministers, repeated the phrase. The proclamation was then read out on a balcony above Friary Court in St James’s Palace.

Clerk of the Privy Council Richard Tilbrook proclaimed Charles “King, head of the Commonwealth, defender of the faith”, before declaring “God Save the King”.

On Saturday evening, the King’s car stopped on its way down the Mall and he and Camilla, the Queen Consort, got out to greet some of the thousands of well-wishers who lined the road down from Buckingham Palace.

There were joyful shouts of “God Save the King”, as he and his wife accepted bunches of flowers and handshakes.

Nine shows to stream about the Queen