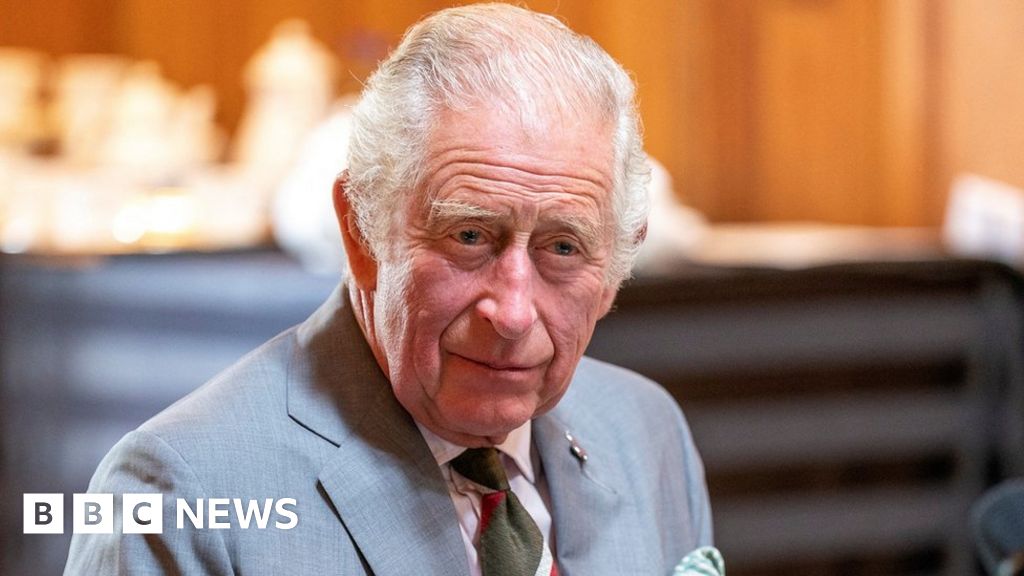 King Charles III is expected to address the nation for the first time as sovereign at 18:00 BST, following the death of Queen Elizabeth II.

Britain’s longest-reigning monarch died peacefully, surrounded by her family, at Balmoral in Scotland on Thursday.

The King is on his way to London, where he is also due to meet Prime Minister Liz Truss later.

Gun salutes will be fired and church bells have begun to toll as the UK pays tribute to her reign.

The bells of St Paul’s Cathedral, Westminster Abbey and Windsor Castle rang out at noon in tribute to her life and service.

There have been spontaneous gatherings and outpourings of emotion at Balmoral, Buckingham Palace and Windsor.

Members of the public have travelled to leave flowers, messages of thanks and condolence for the Queen and Royal Family, with many visibly tearful or overcome with emotion.

Union jacks are being flown at half mast and Lords and MPs have gathered to pay tribute to her momentous 70-year reign.

A gun salute in London’s Hyde Park has been arranged for the following hour, with 96 rounds to mark each year of her life to fire around 13:00 BST.

There will be a remembrance service at St Paul’s at 18:00 BST, attended by Prime Minister Liz Truss and other senior ministers.

It will be open to the public, with 2,000 tickets to be released on a first-come-first-served basis.

Those wishing to attend must visit in person to the City of London tourism office on Carter Lane in London to collect a wristband from 11:00 BST.

Premier league and English Football league fixtures this weekend have been postponed as a mark of respect.

The King and his wife, Camilla, now Queen Consort, are heading to London, where the monarch is expected to address the nation after holding an audience with the new Prime Minister Liz Truss.

All of the Queen’s children and her grandchildren, the Duke of Cambridge and Duke of Sussex, travelled to Balmoral, near Aberdeen, on Thursday after the Queen’s doctors became concerned about her health.

Prince Harry left Balmoral on Friday morning to travel to Aberdeen airport, where he was seen placing an arm around a member of staff.

On Friday, the palace released some details of plans over the coming days, with King Charles declaring a period of Royal mourning be observed for seven days after the funeral of his mother.

The date of the funeral is yet to be revealed, but it is expected to be in the next two weeks.

Before that, the the Queen’s coffin will lie at rest in Edinburgh for 24 hours in the coming days and will then move to London to lie in state .

While it is lying in state in Westminster Hall, the coffin will will rest on a raised platform and members of the public will be allowed to file past and pay their respects.

The government has said it expects large crowds to gather in central London and other Royal Residences as a mark of respect, warning there could be some travel disruption, traffic delays and significant crowding,

Members of the public have been asked to leave their flower tributes in designated areas at Royal Residences.

The government has published guidance for the period of national mourning, to run until the day of the Queen’s funeral, which says:

Tributes to the Queen are being paid by MPs and peers in the Houses of Commons and Lords from midday until Friday evening, with normal politics put on hold.

The Cabinet met on Friday morning, with the only item on the agenda to pay tribute to the Queen.

There will also be a rare Saturday sitting of the House of Commons, where senior MPs will gather to take an oath of allegiance to the new King from 14:00 BST, with condolences continuing again until the evening.

Following his mother’s death, King Charles said it was a “moment of great sadness” for him and his family and that her loss would be “deeply felt” around the world.

“We mourn profoundly the passing of a cherished sovereign and a much-loved mother,” he said in a statement.

During the coming period of mourning, the King said he and his family would be “comforted and sustained by our knowledge of the respect and deep affection in which the Queen was so widely held”.