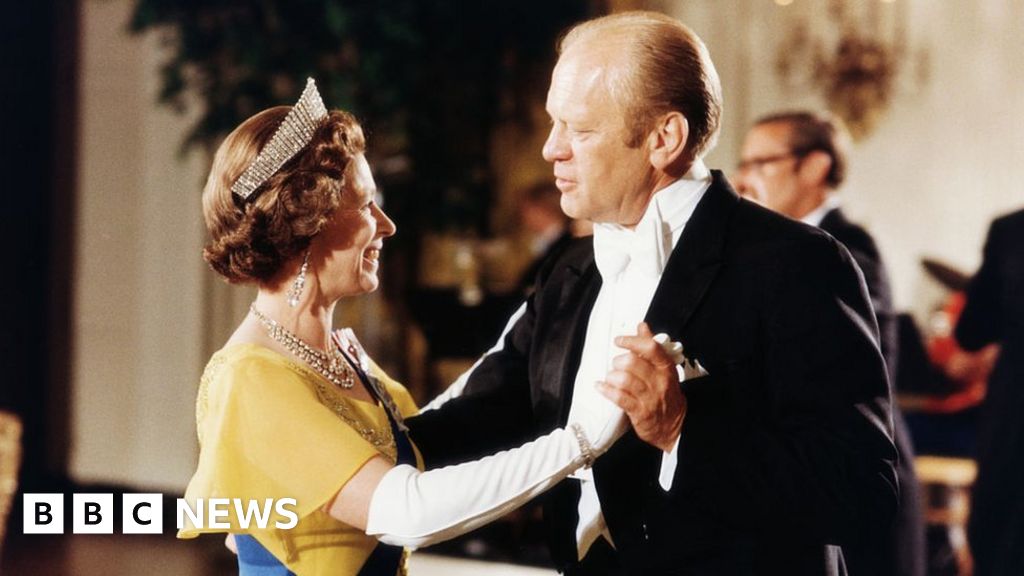 Over a period spanning more than 70 years, Queen Elizabeth met with more than a dozen US presidents and 12 Canadian prime ministers.

The only American president elected during her reign that the Queen did not meet was Lyndon Johnson. The rest, from Harry Truman to current President Joe Biden, all met Britain’s longest-reigning monarch.

The Queen visited Canada – where she was head of state – more than two dozen times taking in every province and territory.

Then-Princess Elizabeth met her first US President in 1951, when Truman greeted her and Prince Phillip at Washington National Airport at the start of a two-day visit to the city.

The president referred to the pair as “a wonderful young couple that so completely captured the hearts of all of us”.

“You will leave many happy memories among the people who have greeted you here,” he said. “We want you to come to back again”.

Six years later, the Queen was hosted by President Dwight Eisenhower and First Lady Mamie Eisenhower at the White House for four days.

A reciprocal visit to Scotland by the Eisenhowers two years later ended with a promise that she would send the president the recipe for drop scones, a Scottish delicacy for which he had developed a taste.

“Seeing a picture of you in today’s newspaper in front of a barbeque grilling quail reminded me that I have never sent you the recipe of the drop scones I promised you at Balmoral,” the Queen wrote the following year. “I now hasten to do so and I do hope you find them successful”.

The Queen visited Canada more than any other country during her reign. During one visit in 1977, Prime Minister Pierre Trudeau took the Queen to a Canadian football game.

He later remarked that the occasion was one of the few public appearances in which he wasn’t heckled by critics.

The Queen was introduced to the prime minister’s five-year old son Justin – who would eventually become the last Canadian leader to meet her.

In July 1976, President Gerald Ford and his wife Betty hosted the Queen at the White House to mark the 200th anniversary of the US declaring independence.

The dinner famously saw President Ford and the Queen dance to The Lady is a Tramp – perhaps not the most felicitous choice of tune, as many commentators noted afterwards.

“The Queen was easy to deal with,” Betty Ford later wrote in her memoir. “She was very definite about what she wanted and what she didn’t want.”

Canada’s 20th prime minister, Jean Chrétien, first met the Queen while he was a junior minister in 1967. Three years later, Mr Chrétien – by then Minister of Indian Affairs and Northern Development – escorted the Queen to the Northwest Territories aboard a small plane.

“It was a great occasion,” Mr Chrétien told Canada’s CTV network. He added that both the Queen and Prince Philip took the opportunity to practise French – which she spoke fluently.

The Queen shared a particularly warm relationship with President Ronald Reagan, with whom she bonded over a shared love of horseback riding.

The two rode together on several occasions, both in the UK – as seen above – and at the Reagan family ranch in California where she was treated to the president’s favourite Mexican dishes.

“I must admit the Queen is quite an accomplished horsewoman,” President Reagan later wrote of his experience.

In 1991, the Queen and George HW Bush planted a linden tree on the grounds of the White House.

The tree replaced an older one – planted in 1937 by her father King George VI – after it was destroyed in a storm.

President Barack Obama and his wife Michelle first met the Queen in London in 2009.

They returned to the UK two years later for a banquet hosted by the Queen. In a speech that evening, the Queen lauded the close ties between the two countries and joked about the linguistic differences in British and American English.

“Over the years, we have enjoyed some of America’s most spectacular musical productions and any number of what we call films,” she said. “Which you might prefer to call movies.”

In 2018, US President Donald Trump famously committed an unintentional breach of protocol by walking in front of the Queen at Windsor Castle.

Fiona Hill, a British-born presidential adviser at the time, later wrote that Mr Trump was “always slightly awe-struck when he talked about her”.

“A meeting with the Queen of England was the ultimate sign that he, Trump, had made it in life,” she wrote.

Queen Elizabeth’s relationship with Canada came full-circle in October 2015, when she held a private audience with Justin Trudeau at Buckingham Palace during one of his first trips abroad as prime minister.

“You were much taller than me last time we met,” Mr Trudeau said, prompting the Queen to remark that the meeting was “extraordinary to think of”.