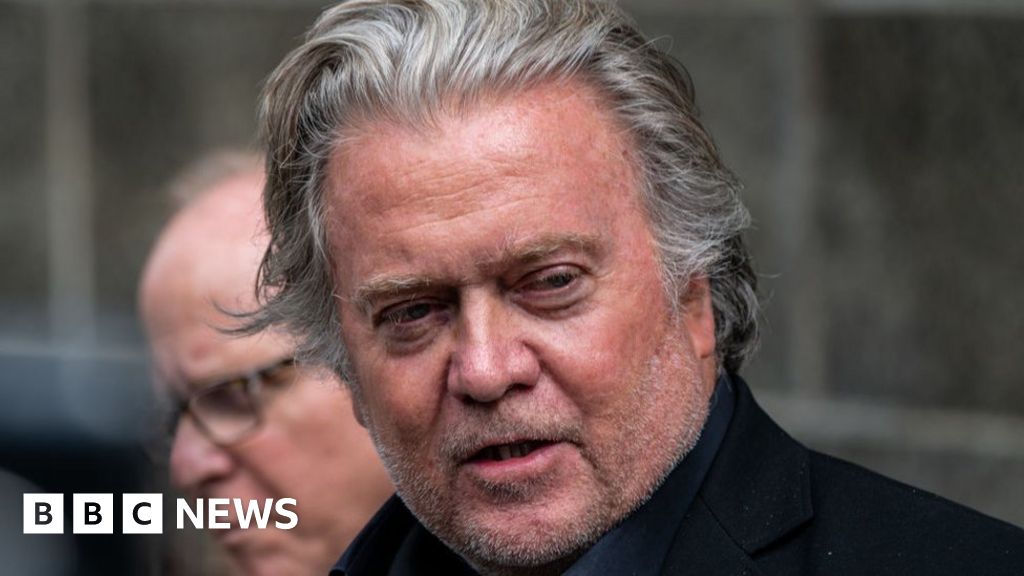 Steve Bannon, a long-time ally of former US President Donald Trump, has been indicted on charges of money laundering, fraud and conspiracy.

Mr Bannon, 68, is accused of cheating donors to a fundraiser to help Mr Trump achieve his policy goal of building a wall on the US-Mexico border.

Prosecutors in New York allege he lied to donors and diverted some of the money to two associates.

The former White House chief strategist has said he is being persecuted.

Mr Bannon surrendered to authorities in New York state on Thursday as a grand jury unsealed six criminal charges against him.

Handcuffed as he walked past reporters into court, the right-wing podcaster vowed to fight back.

“This is what happens in the last days of a dying regime,” he said. “They’ll never shut me up. They’ll have to kill me first.”

According to the indictment against him, Mr Bannon told donors he was “kind of a volunteer” to the We Build the Wall non-profit, which raised more than $25m (£22m) from thousands of people online.

Despite his vow that “not a penny” would be pocketed by him or others, Mr Bannon is said to have diverted hundreds of thousands of dollars to two associates.

Federal prosecutors brought charges against Mr Bannon and the two men – Brian Kolfage and Andrew Badolato – in 2020. But while Mr Kolfage and Mr Badolato pleaded guilty to the charges, Mr Bannon received a presidential pardon on Mr Trump’s final day in office last year and was subsequently dropped from the case.

Pardons, however, apply only to federal crimes, and prosecutors in New York state pursued similar charges against Mr Bannon.

“Stephen Bannon acted as the architect of a multi-million dollar scheme to defraud thousands of donors across the country – including hundreds of Manhattan residents,” district attorney Alvin Bragg, who led the probe, said in a statement on Thursday.

New York Attorney General Letitia James, whose office also worked on the case, added that Mr Bannon had taken “advantage of his donors’ political views to secure millions of dollars which he then misappropriated”.

Ms James said “powerful political interests” who “think they are above the law” must be held to account. Mr Bragg and Ms James, both Democrats, have also been investigating Mr Trump and his business.

As he turned himself in on Thursday morning, Mr Bannon slammed the indictment as “nothing more than a partisan political weaponisation of the criminal justice system”.

He alleged that the new charges against him were “all about 60 days” – an apparent reference to November’s midterm elections.

Separately in July, Mr Bannon was found guilty of contempt of US Congress after he defied a legal summons from the committee investigating last year’s Capitol riots.

He is due to be sentenced in that case next month and faces up to two years in jail.