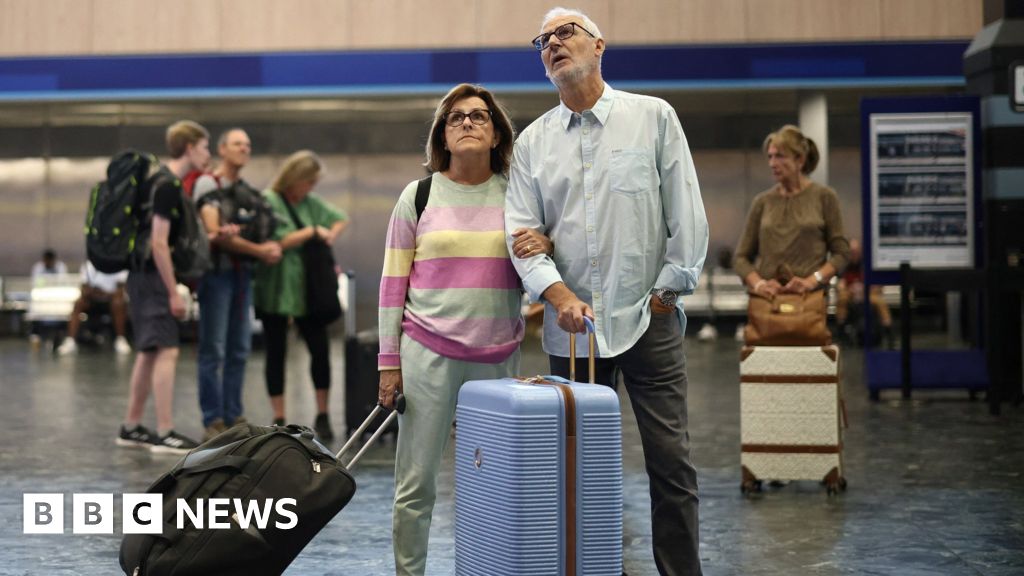 Football fans and festival goers are among those facing fresh travel disruption on Saturday, as more than 45,000 rail workers take part in a further strike over pay and conditions.

Network Rail said only 20% of trains would run, with operators such as LNER and Cross Country affected.

It comes after UK-wide rail strikes on Thursday and walkouts on the London tube network on Friday.

Writing in a letter posted on Twitter, Mr Shapps said: “People feel that this ongoing unnecessary strike action is a kick in the teeth to workers who cannot get to their own jobs now.”

Speaking to BBC Breakfast, Mr Lynch rejected suggestions that striking rail workers would agree to the current offer on the table if the union put it to a vote.

He added: “I’ll be talking to senior executives in the industry all through next week trying to create solutions to these problems and then we’ll decide whether we need to take more industrial action – but I’ve got to say that it’s very likely given the gap between us at this time.”

The union has also accused the government of blocking the train companies from offering its workers a better deal.

However, ministers say the unions are causing the block, adding that if the deals on offer were put to workers, they would be likely to accept them.

Which trains are still running?

Only about one in five trains will run on Saturday, with some areas having no services all day.

Lines will only be open from around 07:30 BST to 18:30 for the limited services that are running – on what is now the sixth day of national rail strikes this summer.

In London, a bus strike will continue on from Friday, with routes being particularly affected in south-west London and parts of Surrey.

ScotRail said the dispute did not involve its staff, but there could be a knock-on effect in Scotland as there will be just 11 routes open.

Because rail strikes often leave trains in the wrong part of the country at the start of the next working day, Sunday travellers have been warned to expect some disruption – although 85% of services are expected to run as normal.

Which events will be affected?

Music and football fans are advised to check whether they will still be able to travel by train to concerts and sports fixtures – or whether they need to switch to travelling by car or coach.

The day’s big music events attracting thousands of travelling fans will include Becky Hill at Crystal Palace Park in London and the All Point’s East festival, in Victoria Park, London. Camp Bestival is taking place in Shropshire but it is thought that most of its 90,000 ticket-holders will already be on site halfway through the four-day festival.

And of course every Saturday during the football season sees a mass migration of away fans.

Wolves fans will be travelling in their thousands to London for their lunchtime match at Tottenham while fans of some big Championship clubs such as Sunderland are having a second awayday this season disrupted by the strike action.

Elsewhere, tourists and holidaymakers are warned to check their travel plans ahead off time.

‘I have to travel day early to see Coldplay’

Student Kristiana Zunde, 23 and from Wakefield, West Yorkshire, says the strikes have forced her to travel a day early to make it to a Coldplay concert in London.

Her train booking for Sunday was cancelled due to disruption, so on Saturday she is catching a five-hour coach from Leeds to the capital. The journey lasts two hours longer than the train she was due to catch.

Ms Zunde, who is blind, said: “When I get the train, I much prefer it. I can book assistance in advance, they meet me in the train station and help me get on the right train.

“You can’t do that with coaches. I’m having to ask my friends to trek to the coach stations and meet me, in Leeds and London Victoria.

“I do understand why the strikes are going on, I really do, but at the same time it is frustrating for people who can’t drive and for people whose only option is getting the train.”

Why are the strikes still ongoing?

The unions, including RMT, TSSA and Unite union members, are in dispute with the government and rail companies as they say salaries should increase to reflect the rising cost of living.

Network Rail, says its latest offer is worth more than 5%, although this depends on whether workers accept “modernising reforms”.

However, the RMT says this is a “paltry sum”.

Mick Lynch, general secretary of RMT, told the BBC: “We can deal with evolution of the railway, but what we can’t have is imposition of change and detrimental changes to our members lives that will make them not able to change their bills.”

Dan Panes from the RDG also told the BBC the aim was to get “conversation rather than confrontation”.

What other strikes took place this week?

Staff at Network Rail took action on Thursday with rail strikes, while TfL said the Tube strikes on Friday resulted in usage of the underground being 90% down on the same day last week, with 98,345 entrances and exits on the London Underground network up until 10AM.

General secretary Mick Lynch apologised for disruption to the Tube, but claimed the union had been shut out of talks between the government, the Treasury, and Mayor Sadiq Khan’s office.

Mr Lynch said: “They’ve got to get us around the table so we can talk about their issues, but at the minute there’s been a big stalemate.”

In response to Mr Lynch’s claims, Mayor of London Sadiq Khan said he and the RMT union were “on the same side here, nobody wants the government to be attaching unreasonable conditions to our deal”.

A spokesman for the Department for Transport accused union leaders are “opting to inflict misery” by disrupting travel.

How have you been affected by the rail strikes? Share your experiences by emailing haveyoursay@bbc.co.uk.