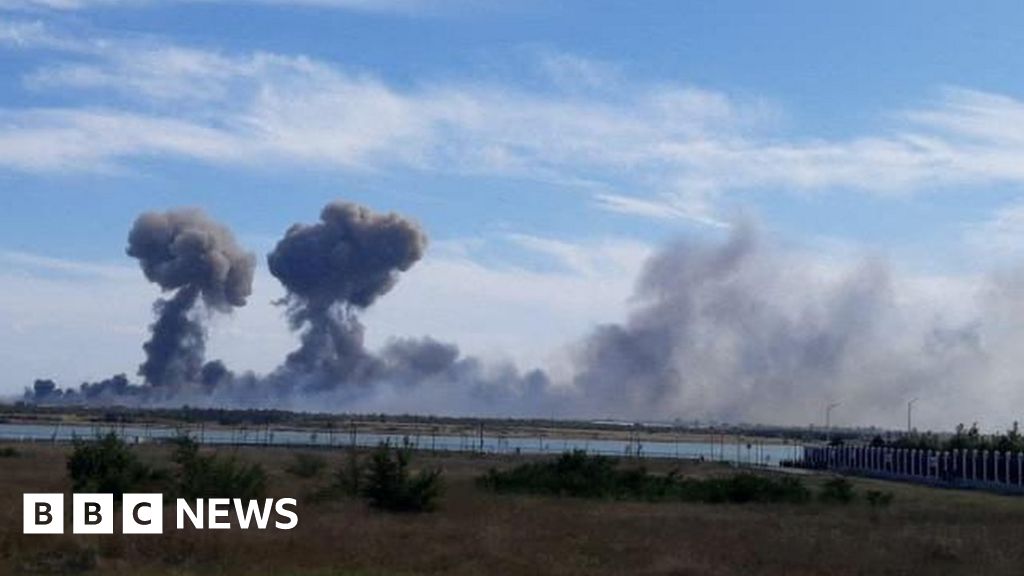 Ukrainian strikes on Crimea are having major psychological and operational effects on Moscow’s forces, Western officials have told journalists.

Explosions at the Saki airbase on 9 August and other assaults have put more than half of the Black Sea fleet’s naval jets out of action, they said.

The fleet has a revered history, but it has suffered a series of humiliations since the invasion began in February.

Officials said the setbacks have forced it to adopt a defensive posture.

In March, the fleet’s flagship, the cruiser Moskva, was sunk by Ukraine. The 510-crew missile cruiser had led Russia’s naval assault on Ukraine, and its sinking was a major symbolic and military blow.

At the time, the Russian defence ministry said ammunition on board the Moskva exploded in an unexplained fire, and the ship tipped over while being towed back to port.

In June, the fleet suffered another embarrassment when it was forced to abandon Snake Island, a tiny outpost in the north-west of the Black Sea seized by Russia on the first day of its invasion, after coming under sustained Ukrainian bombardment.

In recent weeks, the fleet’s home in the Crimean peninsula, which Russia annexed in 2014, has come under attack from Ukrainian forces.

At least eight fighter jets were destroyed in the bombardment of Saki airbase on 9 August.

Following the attacks, scores of holidaymakers were seen fleeing the peninsula, which was previously untouched by fighting. Images acquired by the BBC showed queues of traffic on roads leading out of Crimea three days after the attack.

The 9 August strikes were not the only apparent Ukrainian strikes in Crimea.

In July, Russian officials alleged that a Ukrainian drone attack forced an end to Navy Day celebrations in Sevastopol, and on 16 August there were explosions at at arms depot on the peninsula.

The fact that explosions in Crimea – a place previously considered to be well beyond the reach of any Ukrainian attack – were watched by thousands of Russian tourists, many of whom have since fled Crimea back into Russia, has had a psychological effect in Moscow, officials told the media.

The Western officials, who spoke unattributably on background, meaning they cannot be named, said that Russia’s Black Sea fleet has been reduced to little more than a coastal flotilla that is now having to adopt a cautious attitude due to Ukrainian attacks.

They added that Russia’s ability to launch an assault on the port of Odesa in western Ukraine is highly unlikely in the short term.

On Wednesday, Russian state media reported that the fleet’s commander, Igor Osipov, had been replaced in light of the attacks. The RIA news agency said the fleet’s new chief, Viktor Sokolov, has been introduced to military leaders at the port of Sevastopol.

Moscow also seems to be trying to re-arm its beleaguered fleet. State media reported that Admiral Sokolov told a group of young officers that they will receive 12 new vessels, alongside additional aviation and land-based vehicles later this year.

He insisted that the fleet has been “successfully completing all the tasks set for it” during the invasion, Russia’s Tass news agency reported.

But on Wednesday, UK defence officials said that the Kremlin’s plans have been “undermined” by the navy’s failure to assume full control over the Black Sea.

The Black Sea fleet has generally pursued an “extremely defensive” position and remained near the Crimean coast, they said.