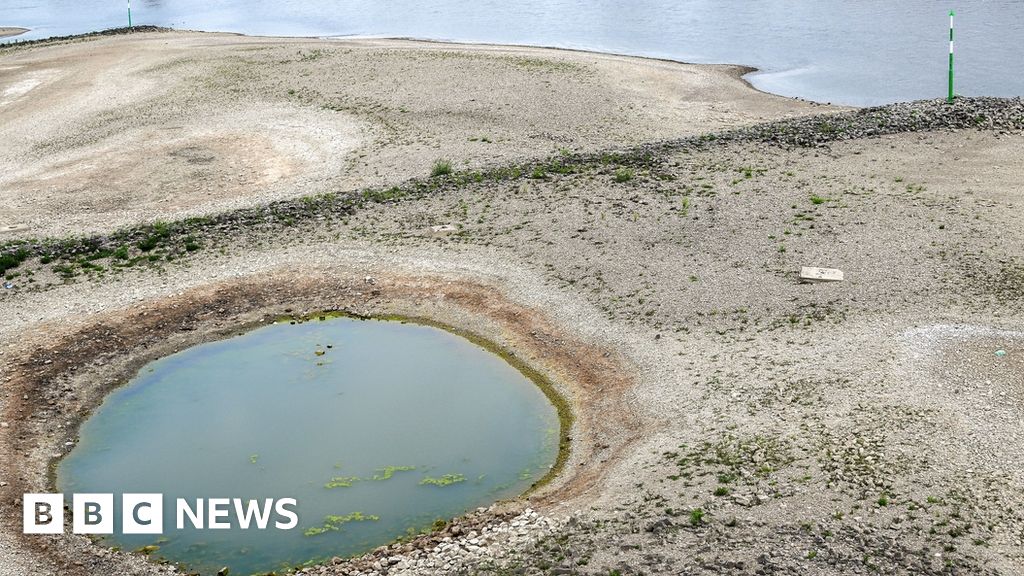 Captain Andre Kimpel casts an experienced, but worried, eye across the river Rhine, where water levels have dropped significantly in recent days.

Several ferry services in and around the town of Kaub have been forced to a standstill, but he’s still carrying people and their cars across the water to the opposite bank – for now.

“It’s no joke,” he says as he navigates the water which sparkles in the summer sunshine. “We have 1.5m [5ft] of water and our boat sits 1.20m deep. So we have 30 centimetres of water left beneath us.”

It’s not unusual for water levels to drop here but, Captain Kimpel says, it’s happening more frequently. “We used to have a lot of floods. Now we have a lot of low waters.”

On the riverbank nearby, there’s an old measuring station. Any skipper wanting to enter the Upper Rhine will refer to the official water level recorded here.

The current level hasn’t yet fallen below the lowest figure ever recorded here, in October of 2018. The measurement then was 25cm (the measurement is taken from the same reference point in the water, not the deepest point on the river bed).

It’s currently 42cm – but is forecast to fall further in the coming days.

Travel a little further upstream and the challenge is obvious.

At the town of Bingen, great swathes of the riverbed are exposed, bleached stones powder dry in the baking sun. People from the nearby town pick their way over the rocks, take photographs. In normal times they’d be underwater. One man told me he’d never seen it like this.

The Rhine is one of Europe’s great working rivers and industry here relies on barges to fetch and carry raw materials and finished products to and from the power plants and factories that line the riverbank.

The water’s already too low to allow some of the larger vessels through. Others have been forced to reduce their cargo, lighten the load so that they sit higher in the water. And they’re keeping a close eye on the river levels.

It’s likely that the Upper Rhine will be closed to traffic completely, says Martina Becker from HGK shipping. Low water happens every year, she tells us, but it’s not as extreme as this.

“It’s quite extraordinary, particularly for this time of year. July and August are usually quite wet months with lots of rain and good water levels.”

Low water normally happens later in the year, in October, she says.

“This is an unusual situation for us and the question is what happens in October, when the usually dry months arrive. We are already approaching the record low level we had in 2018. We could reach that level next week.”

Experts have warned that the low water could significantly damage Germany’s economy.

And there’s an extra worry for the government. Since Russia reduced its gas supply to Germany, the ministers are relying more heavily on coal-fired power stations. But much of the coal that feeds them is transported by barge. Some of the load is being shifted to the railway network but there’s limited capacity.

There’s a far greater concern among those who live by or work on the river.

The government agency which monitors the levels say that the current low water may just be part of a normal pattern. But, they note, such events are becoming more intense as a result of climate change and they say the situation will worsen in the second half of this century.

At Bingen, the water has fallen low enough to expose an old stone bridge which leads to a little island. People laugh as they make their way across the rocks, enjoying the novelty of being able to reach it on foot. But, for many, in this new landscape, it’s a warning.