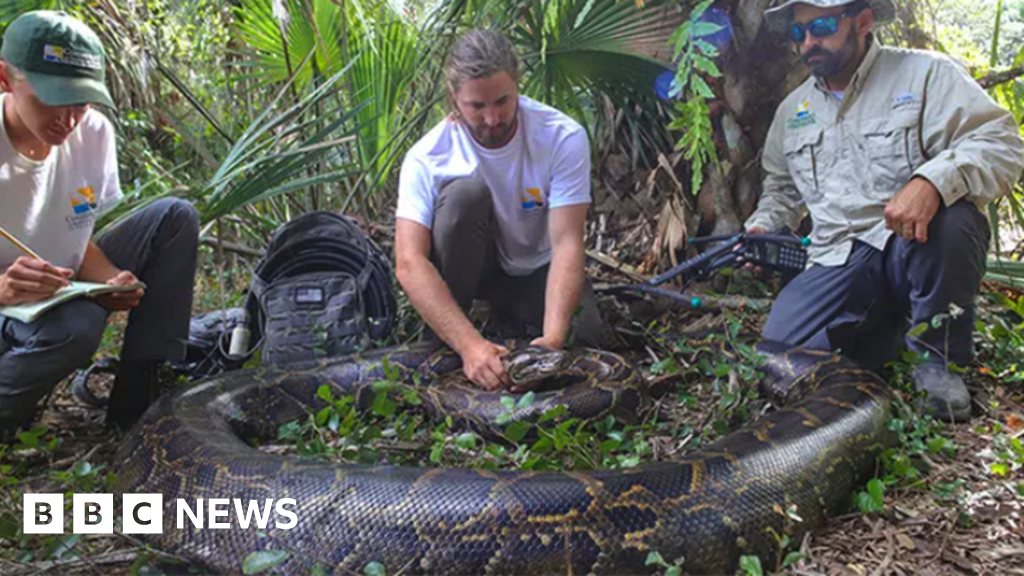 Her last meal was an entire white-tailed deer, and she was on her way to a rendezvous with a male snake when the largest python ever found in Florida met her demise.

Weighing in at 215lbs (98kg) and nearly 18ft long (5 meters), the female Burmese python was caught after researchers used a male “scout” to find her.

She wrestled with biologists for 20 minutes before she was “subdued”, they said Wednesday.

Pythons have become pests in Florida as invasive snakes with no major predators, out-competing native species.

The serpents have been periodically found in the state since irresponsible pet owners released or allowed pet pythons to escape years ago, with many then going on to thrive in Florida’s subtropical climate.

The record-setting Burmese female killed by researchers from the Conservancy of Southwest Florida was about the height of a giraffe if stretched out vertically, according to state biologist Ian Bartoszek.

She had been slithering around the Florida Everglades forest when biologists, using a male python named Dionysus outfitted with a radio transmitter, found her.

He stopped at a spot in the western part of the forest. “We knew he was there for a reason, and the team found him with the largest female we have seen to date,” Mr Bartoszek said. She was also discovered to have been pregnant with an astonishing 122 eggs.

The largest male ever found there was 16ft and 140lbs.

It is estimated that she was up to 20 years old when caught.

Researchers have been hunting pythons in Florida for over 10 years in an effort to protect native species in the region’s ecosystem.

Since being established in 2013, the Conservancy of Southwest Florida’s python programme has removed over 1,000 pythons from around 100 sq miles in southwest Florida.

Florida also runs an annual contest asking the public for help with hunting pythons. The “Python Challenge” will run from 5 to 14 August and is expected to draw around 600 participants from 25 different states.

Last year’s winner captured 223 pythons, while the longest snake was 15 feet long. All snakes must be killed humanely.

Hong Kong handover: What will the next 25 years hold?
Chris Pincher: New claims emerge against former Tory MP
Is any UFC fighter better than him?
Special Covid leave scrapped for NHS England staff
Ukraine war: Johnson says if Putin were a woman he would not have invaded