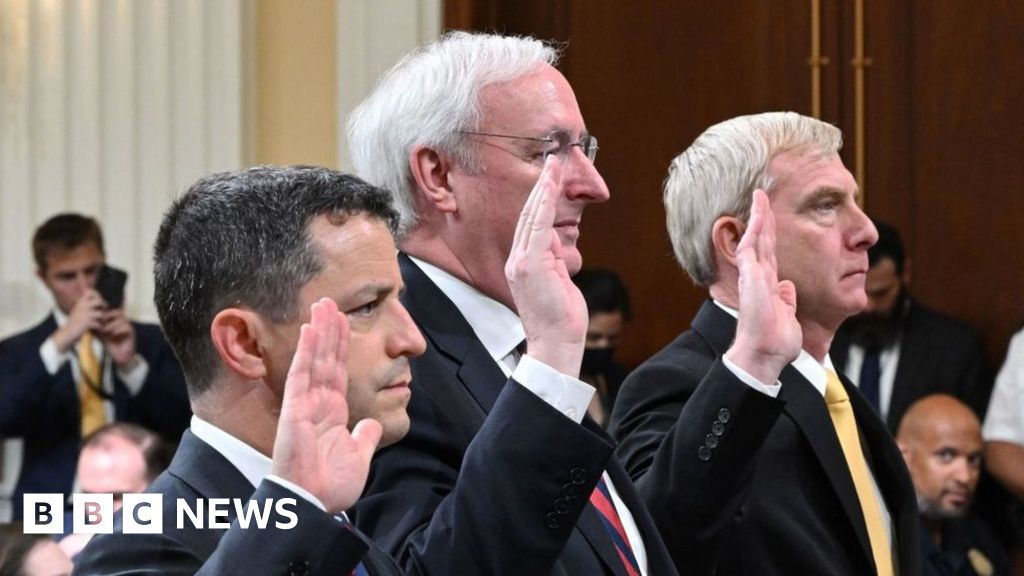 Justice department officials said they told Mr Trump there was zero evidence to his claims of mass voter fraud.

The attorneys also testified that the president’s plan to reverse his loss in key states was “a murder-suicide pact”.

The panel is investigating last year’s US Capitol riot as an attempted coup.

The House of Representatives select committee is seeking to build a case that Mr Trump’s efforts to stay in power in the lead-up to the violent raid by a horde of his supporters on Congress on 6 January 2021 amounted to illegal conduct.

Mr Trump, a Republican, has described the inquiry as a “kangaroo court” designed to distract Americans from the “disaster” of Democratic-led governance and spiralling inflation ahead of November’s US mid-term elections.

With President Joe Biden’s popularity at an all-time low, Mr Trump has been indicating he may run for president again in 2024.

Thursday’s public hearing, the fifth so far, focused on a pressure campaign waged by Mr Trump against the Department of Justice – the federal agency that enforces US law and is supposed to be independent from the White House.

Former acting Attorney General Jeffrey Rosen said Mr Trump had reached out to him “virtually every day” in the lead-up to the attack on the Capitol where lawmakers were assembled to certify Mr Biden’s election win.

According to Mr Rosen, Mr Trump asked that the justice department simply issue a statement calling the election results into question, adding “leave the rest to me and the Republican congressmen”.

Mr Rosen said he refused. “We did not think they were appropriate based on the facts or the law,” he told the committee.

Former acting Deputy Attorney General Richard Donoghue testified that he had knocked down Mr Trump’s “arsenal of [voter fraud] allegations” one by one in a 90-minute conversation in December 2020.

“This is one of the best examples of the lengths to which President Trump would go to stay in power, scouring the internet to support his conspiracy theories,” he said.

The session also heard of an explosive Oval Office showdown on the night of 3 January 2021 between Mr Trump and three top justice department officials.

Mr Trump outlined a plan during the meeting to replace Mr Rosen with a loyalist named Jeffrey Clark, an environmental lawyer, who had no relevant experience to run the department, the committee heard.

On official letterhead, Mr Clark had drafted a memo advising lawmakers in states that Mr Trump narrowly lost on how to throw out their election results.

Pat Cipollone, then the White House counsel, had warned the letter would be “a murder-suicide pact”, Mr Donoghue said.

He testified that he, Mr Rosen and another senior official, Steven Engel, warned the president there would be a mass exodus from the justice department if he installed Mr Clark. Mr Trump ultimately backed off the plan.

The committee said Mr Clark had refused to answer its questions, invoking his right not to self-incriminate. Thursday’s hearing was held shortly after it was reported that the FBI had raided Mr Clark’s home.

Two more open hearings will take place next month before the committee prepares a report on the Capitol attacks.

The panel cannot bring charges against the former president, but is expected to refer its findings to the justice department.