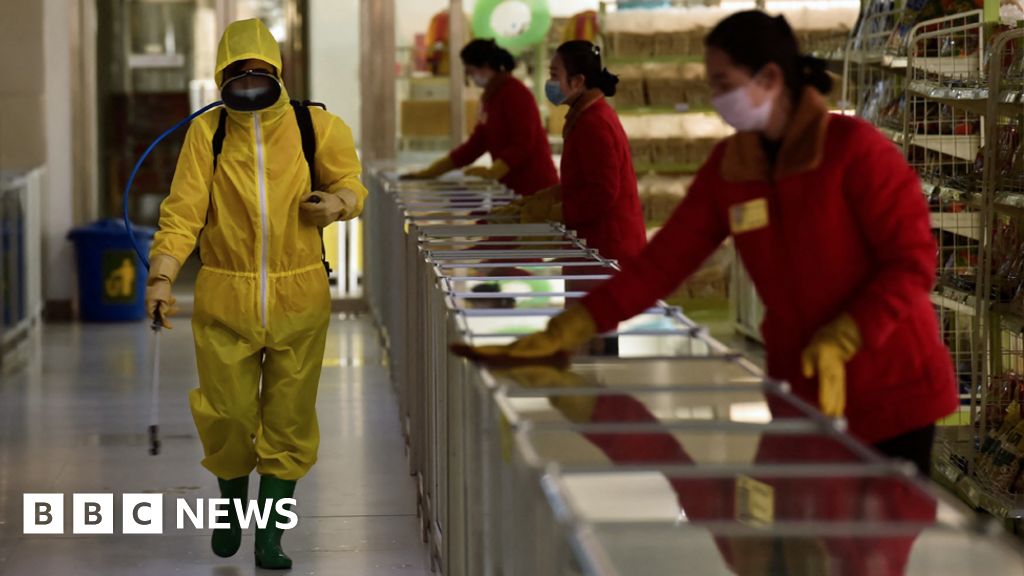 North Korea’s leader Kim Jong-un has lambasted health officials and ordered the army to help distribute medicine, as a wave of Covid cases sweeps through the country.

More than a million people have now been sickened by what Pyongyang is calling a “fever”, state media said.

Some 50 people have died, but it’s unclear how many of those suspected cases tested positive for Covid.

North Korea has only limited testing capacity, so few cases are confirmed.

North Koreans are likely to be especially vulnerable to the virus due to lack of vaccinations and a poor healthcare system. A nationwide lockdown is in place in the reclusive country.

State media said Mr Kim led an emergency politburo meeting at the weekend where he accused officials of bungling the distribution of the national medicine reserves.

He ordered that the “powerful forces” of the army’s medical corps step in to “immediately stabilise the supply of medicines in Pyongyang City”.

The country announced its first confirmed Covid cases last week – although experts believe the virus has likely been circulating for some time.

The international community offered to supply North Korea with millions of AstraZeneca and Chinese-made jabs last year, but Pyongyang claimed it had controlled Covid by sealing its borders early in January 2020.

It seems North Korea is where much of the world was back in early 2020. Covid is spreading rapidly through the population which is not vaccinated, has no built-up immunity, and has limited options to treat the virus.

The difference of course is that North Korea has had time to prepare for this and has seemingly done little to do so. Instead, it has focussed on its strategy of preventing the virus from entering the country.

It has turned down vaccines in the past saying it didn’t need them. Now it does need them, but it might be too late. Health experts say the urgent priority is getting antiviral drugs into the country to treat people who are suffering.

But in order for this to happen, North Korea needs to accept help, and it is yet to ask for any. South Korea’s offers of vaccines and aid have gone unanswered.

It is extremely unlikely the North would ever accept help from South Korea. It will be far more palatable if the offer comes from an international organisation such as the United Nations, even if that means South Korea’s supplies need to be redirected and packaged up in this way.

It is a risk for North Korea to accept aid and medical care because it means they would have to let people into the country to distribute and administer it. But the fact that it is reporting its daily deaths and case numbers is seen as an indication that it needs and wants help.

Professor Hazel Smith of the School of Oriental and African Studies (SOAS) in London says those strict quarantines have been a key strategy for North Korea in its bid to control epidemics in the past – such as for Sars or Ebola.

Now that the borders have been breached, the country lacked organisational infrastructure and was struggling with basic necessities like “enough disinfectant and electricity and running water”, she told BBC Radio 4’s Today programme.

“Once an epidemic has started, they’ve got difficulties in controlling and treating people who are ill,” Prof Smith added.

North Korea shares land borders with South Korea and China, which have both battled outbreaks. China is now struggling to contain an Omicron wave with lockdowns in its biggest cities.

South Korea has offered to send unlimited aid to the North if requested, including vaccine doses, health workers, and medical equipment.

“The spread of the malignant epidemic is [the greatest] turmoil to fall on our country since the founding,” the official KCNA news agency quoted him as saying.

As well as the direct health impact, fears have been raised for food production in North Korea. It suffered a brutal famine during the 1990s, and today the World Food Programme estimates that 11 million of the country’s 25 million people are undernourished.

If agricultural workers are unable to tend the fields, analysts say, the implications are extremely serious.